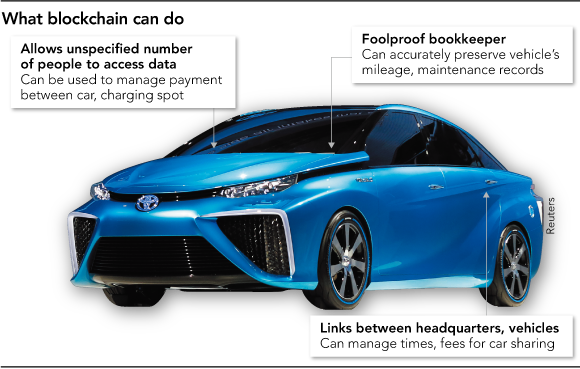 TOKYO -- Blockchain technology is quickly leaping from bitcoin into automobiles. Just as it took the financial industry by storm owing to its cheap but secure data protection, blockchain has begun attracting interest from the auto industry, which will be handling large amounts of data as it moves into connected and autonomous vehicles.

"Hundreds of billions of miles of human driving data may be needed to develop safe and reliable autonomous vehicles," Chris Ballinger, Toyota Research Institute's director of mobility services and chief financial officer, said in May. "Blockchains may enable pooling data from vehicle owners, fleet managers and manufacturers to shorten the time for reaching this goal," he explained.

In May, the U.S. research unit of Toyota Motor announced that it is collaborating with MIT Media Lab and companies in Germany, Israel and the U.S. to explore the use of blockchain as it heads into the age of connected cars.

Soichiro Takagi, an associate professor at the Center for Global Communications at the International University of Japan, highlighted several advantages that blockchain technology offers -- including its function as essentially a foolproof bookkeeper, that it can link a physical object to data, and can operate safely without a middle manager. He said these advantages make it ideal for the connected car sector and ancillary services.

If blockchain technology can be adapted to connected cars, it could help record how many miles a vehicle has logged, or how often it has been serviced -- both key to measuring a vehicle's value and calculating insurance rates.

Blockchain's ability to link a physical object to data enables car-sharing companies to locate any vehicle at anytime, and determine who to charge for services.

Cars being developed by high-tech companies can be connected to numerous networks. These new vehicles are equipped with multiple sensors that monitor everything inside and outside the car, producing mountains of data valuable to both driver and passengers. Bitcoin and other open-source cryptocurrencies rely on a "public blockchain." This differs from a "consortium blockchain," which is utilized by a limited number of companies. A "private blockchain," meanwhile, is used only within a single company. The trend today is to develop these blockchain technologies so they can help us keep track of more parts of our lives. To aid these efforts, there is something called a "sidechain," which complements the blockchain. (This chart was prepared based on materials provided by Gaiax's Mine Aram.)

Toyota and its partners are members of the Enterprise Ethereum Alliance, which develops and promotes Ethereum, a promising blockchain platform.

Meanwhile, a Tokyo-based startup, Gaiax, has settled on the blockchain technology behind bitcoin.

Gaiax offers what it calls Trust Dock, an identification platform that uses a blockchain to record and manage customer information. The platform is designed for providers of car-sharing and other share services.

Aram Mine, a manager responsible for technological development, said that Gaiax selected this type of blockchain because "bitcoin has a trading history of more than eight years and its value is stable." Toyota puts car sharing through its paces in Honolulu

The biggest obstacle to the full-fledged use of blockchain in automobiles may be speed. It currently takes bitcoin more than 10 minutes to record each block, or new transaction. The problems are of immediacy and scalability, and researchers will be hard-pressed to have blockchain do a lot more in much less time.

One method that may provide the answer is Lightning Network, a technology that processes payments in "milliseconds to seconds," according to its website.

According to Kenichi Kurimoto, CEO of Nayuta, a Fukuoka-based startup that develops technologies combining IoT -- or internet of things -- and blockchain, "Lightning Network may solve blockchain's biggest problem."

If the tool does what Nayuta claims it can, Lightning Network could make it significantly easier for the connected car sector to adopt blockchain technology.

Originally published by Nikkei Automotive in its August 2017 issue.