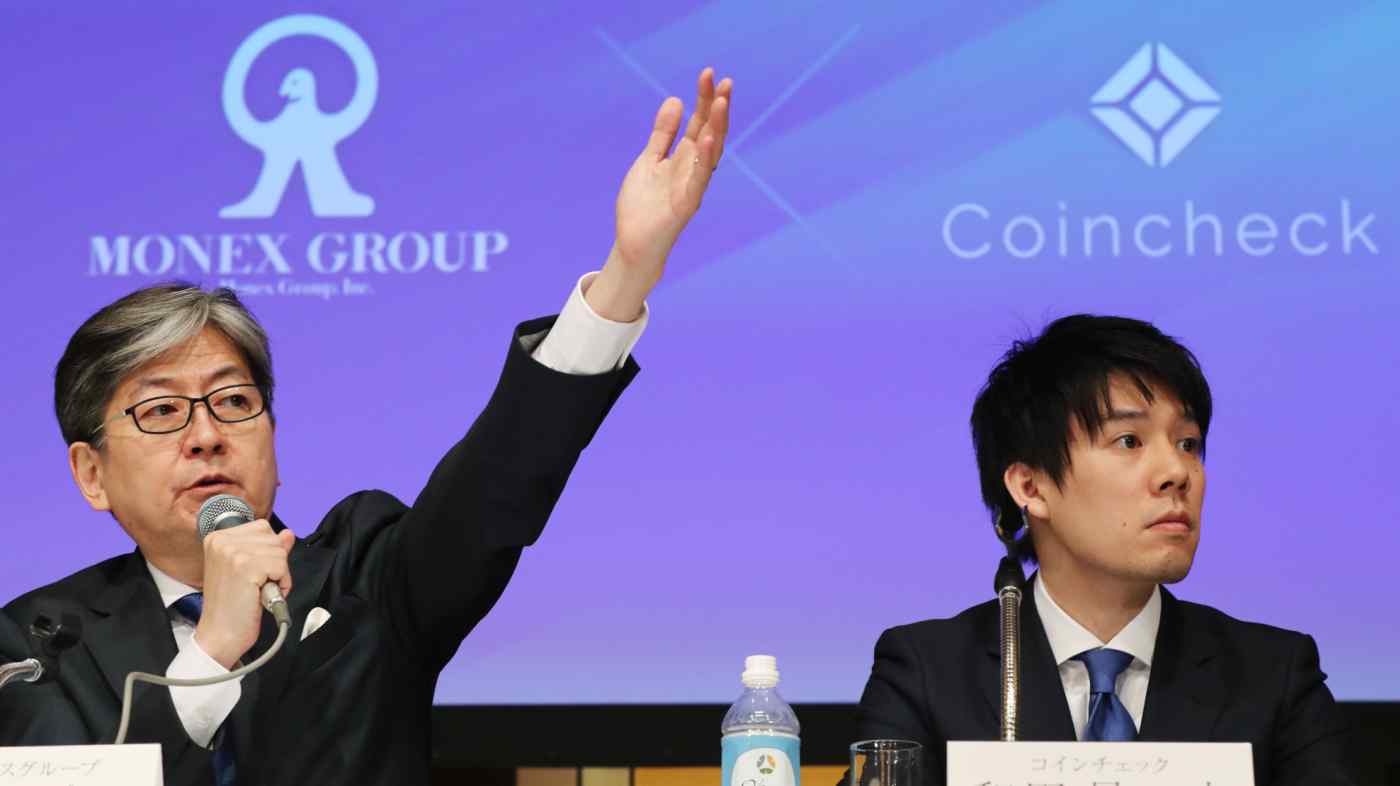 TOKYO -- Japanese cryptocurrency exchange Coincheck ended a twist-filled search for help, accepting a buyout offer from Monex Group on Friday, finding relief from an existential crisis sparked by the high-profile digital heist it suffered in January.

The online brokerage will buy all shares in Coincheck for 3.6 billion yen ($33.6 million) on April 16. "Coincheck has cutting-edge technology, and Monex has experience. Major synergies ought to be possible," Monex Group CEO Oki Matsumoto told reporters Friday.

Hackers stole about 58 billion yen -- then worth about $530 million -- of the NEM cryptocurrency from Coincheck on Jan. 26. The Financial Services Agency ordered the exchange operator to improve its operations three days later, then raided its offices Feb. 2. On March 8, the agency issued a second order to shape up, urging a drastic overhaul of management. "The message was that if they couldn't do it, Coincheck would have to close down," said an FSA official.

On Feb. 13, Coincheck Chief Operating Officer Yusuke Otsuka told reporters that the exchange was considering a tie-up with a third party that appears to have been internet services provider Yahoo Japan. According to several people familiar with the matter, Coincheck CEO and President Koichiro Wada met in mid-February with Yahoo Japan senior executive vice president Kentaro Kawabe, who is set to become CEO in June.

But "Yahoo gave up on getting involved with Coincheck as a result of that meeting," said a source close to the matter. Investing in Coincheck would carry risk that was difficult to foresee, with the company having lost investors' trust and facing legal action over the theft. Thereafter, Yahoo Japan reportedly decided to instead invest in BitARG Exchange Tokyo, another exchange operator, through a subsidiary. BitARG has denied the reports of such an investment.

Daiwa Securities Group also emerged as a potential savior for Coincheck. Japan's second-largest brokerage by assets apparently hit it off with Coincheck the previous year, and there had been talks of a business collaboration. But when Coincheck approached Daiwa for support in February, legal risks once more scuttled the negotiations.

Coincheck stands to lose more than 10 billion yen ($93.4 million) in reparations just from cases already in motion. Daiwa floated the idea of an acquisition that cut Coincheck loose from its legal risk, but the FSA shot that plan down.

The final lifeline from Daiwa involved making Coincheck a part of Money Partners Group, a foreign exchange trading platform that is also a registered virtual currency exchange operator and counts Daiwa as its largest shareholder. But the FSA said Coincheck could not receive support from another cryptocurrency player, citing plummeting confidence in the industry.

Amid the revolving door of would-be benefactors, it was Monex's Matsumoto who expressed willingness to take on all of Coincheck, legal risks included.

Monex was partly motivated by urgency. Mired in last place among Japan's five leading online brokerages by market share, it aimed to stage a technology-driven comeback that included registering as a cryptocurrency exchange operator. But with over 100 companies already lining up for approval, buying Coincheck looked like a chance to move up the queue.

In late-March meetings, an FSA official impressed on Matsumoto the necessity of proper internal oversight. Nevertheless, the prospect of taking over Coincheck had Matsumoto showing "a vigor like in the founding days" of his company, a Monex official said. 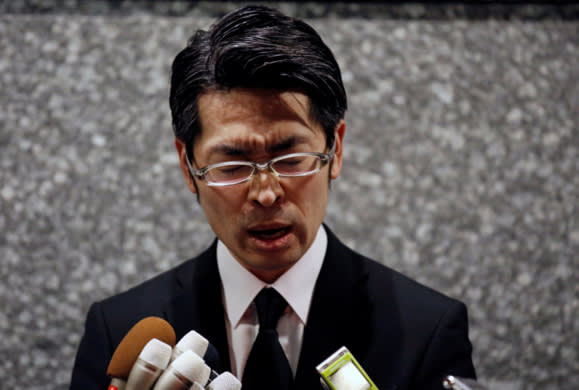 Coincheck COO Yusuke Otsuka spoke with reporters in February, when the company was scrambling for a lifeline. On Friday, he said that the process of paying back customers had been completed.   © Reuters

On Friday, Coincheck's Otsuka also said the company had finished paying back customers affected by January's theft, and that the compensation would now be fully reflected in their accounts. NEM's value declined following the heist, so the company only ended up paying back about 46 billion yen. But the fact that a company less than six years old could cover an amount seen by many as unrepayable illustrates why Monex was interested in the exchange operator.

Coincheck charges a commission for each buy and sell order it handles. Margins for cryptocurrency exchange operators are seen in some corners to be as high as 10%, far exceeding the less-than-1% margins typically collected on foreign exchange trading, for instance. Coincheck's profits are seen by some as having swelled to around 100 billion yen for the twelve-month period ended March, during which cryptocurrencies soared to unprecedented heights.

But "[Coincheck's] current profitability will not last," said an executive at a major brokerage. Bitcoin, the cryptocurrency poster child, has fallen to about one-third of the peak it achieved last year, and transaction fees users did not blink at when prices were rising are now getting a harsher look. Competitors are also pouring in.

Such doubts are reflected in the relatively low price Monex is paying to acquire the exchange operator, as is the risk that Coincheck will fail to gain approval from the FSA and subsequently fold.

But Monex also agreed on a contingency plan to pay existing shareholders up to half of aggregate net income over the three upcoming fiscal years, according to the purchase announcement. The contingency represents a compromise with shareholders who sought a higher price, saying that Coincheck would continue to generate profit if approved, even if at a reduced rate.

Matsumoto has expressed a desire to have Coincheck fully operational again in about two months, and to take it public at some point. But the hurdles ahead are many.