Survival of exchanges threatened as hacks continue to rise TOKYO -- Theft and fraud continue to plague cryptocurrencies, with exchanges already having lost $1.2 billion in the January-March period alone, according to American cybersecurity company CipherTrace.

The alarming losses have some concerned about the survival of exchanges, as fully securing customer accounts from hackers becomes increasingly difficult.

This year's first quarter losses follow the $1.7 billion stolen in 2018, according to CipherTrace.

Cryptocurrency thefts have drawn public scrutiny since the massive theft of 58 billion yen ($538.43 million) from Japan's Coincheck exchange in January 2018.

In May, 4.5 billion yen was stolen from the Hong Kong-based Binance exchange, another $4.3 million in June from Bitrue in Singapore, and 3 billion yen this month from Tokyo's Bitpoint exchange.

All the thefts involved "hot wallets" -- cryptocurrency accounts that were connected to the internet. Exchanges usually keep customer assets in "cold wallets," which cannot be accessed online.

But when customers want to make a transaction, they have to move their assets to hot wallets, where they are vulnerable to hacks. In many cases, the thefts are preceded by email sent from hackers to exchanges, infecting computers with malicious software that allows access to secret keys and passwords.

Although exchanges have beefed up security, it has not deterred thieves. "We encoded our secret keys to make them unusable if they are stolen, but they were decoded," said Bitpoint Japan President Genki Oda at a news conference last Tuesday.

According to CipherTrace, there are likely many other cryptocurrency thefts yet to be discovered. 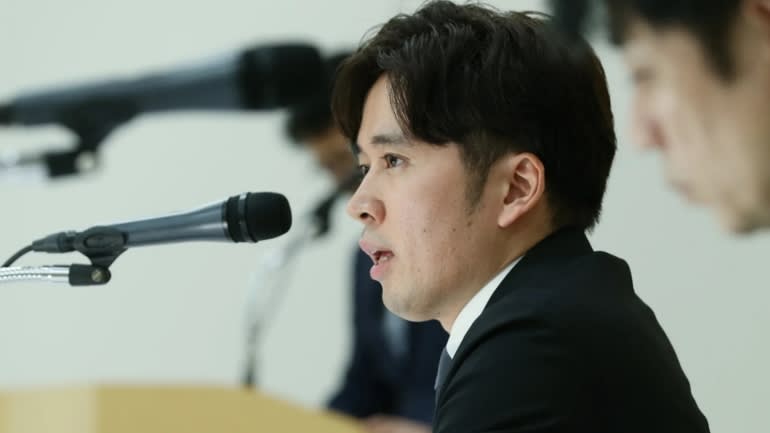 Bitpoint Japan President Genki Oda apologizes for the loss of digital currencies at a news conference in Tokyo on July 16.

Bitpoint upgraded its internal management and security after it was served a warning by Japan's Financial Services Agency in June 2018. When the warning was lifted on June 28, Bitpoint appeared to be in full compliance but was still hacked, suggesting that regulations adopted by the industry watchdog are not working.

In addition to stronger security, measures to identify hackers and recover funds are also needed.

In a March report to the U.N. Security Council, experts reported that North Korean hackers have stolen $571 million from cryptocurrency exchanges. In most cases, the perpetrators remain unknown and the assets have yet to be recovered.

The blockchain technology upon which cryptocurrencies are based allows all transactions to be tracked. But lax security coupled with the sheer number of exchanges and participants makes it extremely difficult to uncover scammers.

Financial regulators worldwide work with the Financial Action Task Force to combat money laundering. This intergovernmental agency has been urging all financial institutions -- including cryptocurrency exchanges -- to full identify their customers but has yet to stop the online scams, providing criminals with another way to launder money.

Regulators and central banks are stepping up their warnings about cryptocurrencies and the need for better oversight of exchanges.