Holdings double since 2015 as calls for change find receptive ears NEW YORK/TOKYO -- Investors who press management to unlock value for shareholders have taken a renewed interest in Japan, a once-fruitless market that has become one of the most promising for bargain hunters.

Activist investors held roughly 3.4 trillion yen ($31.1 billion) worth of Japanese shares at the end of 2019, twice as much from when the corporate governance code was introduced in June 2015, according to data from Nomura Securities.

This month, James Rosenwald, a longtime Japan investor, will launch the Nippon Active Value fund in the U.K. with the aim of raising 200 million pounds ($261 million). The fund seeks to push for share buybacks, dividend increases and more efficient use of capital at about 20 mid-size Japanese companies.

Activists are hunting for value in Japan at a time when stocks in the U.S., their traditional stomping ground, hover at record highs.In part, these moves reflect corporate Japan's growing openness to the kind of changes activist investors favor, such as unwinding cross-shareholding ties.

"We see signs today of more Western-style governance being employed in Japan, which we believe can help make Japanese companies more competitive, thus improving long-term shareholder value," said Ed Garden, chief investment officer at Trian Partners, a major General Electric shareholder that is eyeing an entry in Japan. "We think this is a healthy development." Pressured to fulfill their responsibilities as fund managers, domestic institutional investors have also grown unafraid to disagree with leaders of their portfolio companies. Corporate executives, for their part, are listening more to what shareholders have to say, fearing they would be denied reappointment otherwise. Shareholders also enjoy increased opportunities to pocket gains as companies sell stakes in listed subsidiaries.

Among 37 companies that have been partly owned by activists for five years, return on invested capital has improved about 2 points to 12%, compared with six years earlier, data compiled by Nikkei shows. This compares with a flat performance at 2,664 companies that did not count activists among shareholders. The most notable change is shareholder returns, which jumped 270% from six years before at companies with outspoken investors, while increasing 160% at other companies. Interest-bearing debt also rose 40% at companies having highly engaged shareholders.

Critics say U.S. shareholder activism has encouraged the pursuit of short-term profits at the expense of longer-term competitiveness. Yahoo ramped up share buybacks after billionaire investor Carl Icahn gained a board seat in 2008 and two hedge funds, including Daniel Loeb's Third Point, came onboard. The groundbreaking internet company spent $4.1 billion on repurchases in 2014, while it kept research-and-development spending roughly flat. In the end, it sold off its core internet business, turning itself into an investment company.

Fearing pressure from activists, some young tech companies have stepping up their defense against bids for large stakes. Business communication app Slack issued a new class of shares that gives 10 times the votes as common stock to founders and other select investors. Now these shareholders control a majority of voting rights.

On the other hand, activism can serve as a catalyst for industrial consolidation and improvement in corporate governance -- two areas where corporate Japan is said to need greater progress. 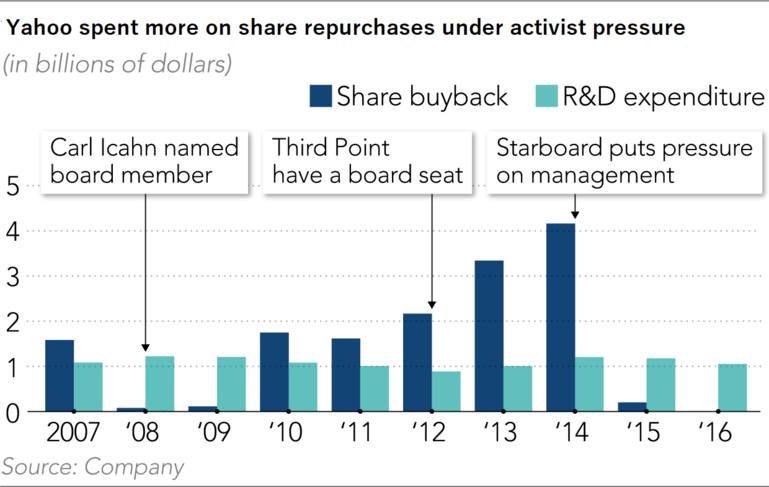