LONDON -- With many Asian countries making the transition to democracy since the 1970s, representative government and media integrity have been pivotal in the region's fight against political corruption.

Research published last month by the International Institute for Democracy and Electoral Assistance shows just how important press freedom and access to power have been.

By looking at 40 years' worth of data, the institute produced indexes for 155 countries relating to different aspects of civil society. 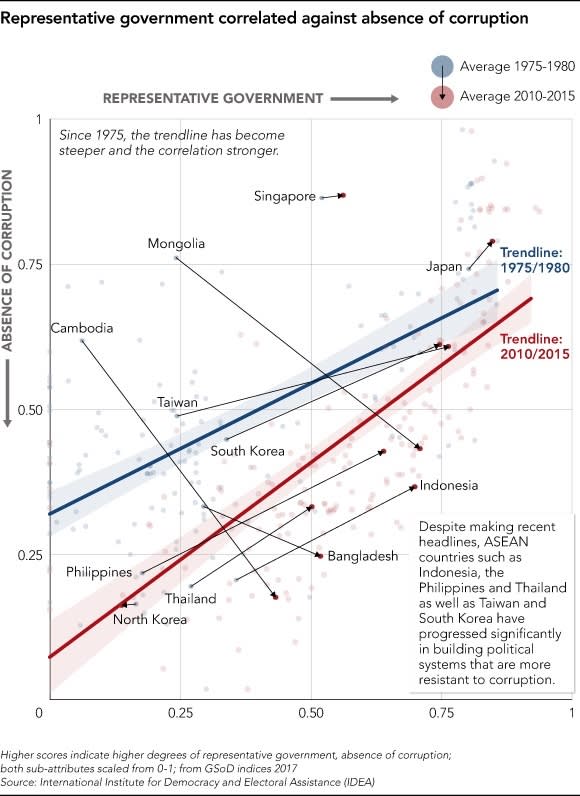 Intangible concepts like democracy and corruption are difficult -- if not impossible -- to quantify. However, the approach taken by the institute, scoring each country from 0 to 1, at least makes cross-country comparisons relatively straightforward.

Despite recent headlines involving military rule in Thailand, the anti-drugs crackdown in the Philippines and corruption in Indonesia, the data suggests that, on the whole, all three countries have developed more robust political systems within the last four decades.

Japan, one of the few Asian countries to have had a representative government already in place by the mid-1970s, made progress in terms of electoral integrity, free and fair elections and electoral democracy, but regressed in terms of media integrity. This, however, does not appear to have had an impact on the country's efforts to root out corruption.Taiwan's media is hailed as one of the freest anywhere in Asia, ranking just below the U.K. and France in Reporters Without Borders' 2017 Press Freedom Index. Voters on the island were well-informed on cases such as the 2008 conviction of former President Chen Shui-bian for corruption and abuse of power.

South Korea has also made significant progress. However, the study only covered the period between 1975 and 2015. Had it also taken into account the effects of the 2016 corruption case against former President Park Geun-hye, the country's standing may have been somewhat different. For a few countries, the relationship did not hold. Notably, for Mongolia, Cambodia and Bangladesh, media integrity and representative government indexes improved while levels of corruption grew.

According to the institute, "Countries in democratic transition can experience, on the one hand, an increase in transparency and rule of law, and on the other hand, the same process of transition may result in countries being more vulnerable as new avenues for corruption may open up."

The Philippines is another country for which the data may not be entirely conclusive. The study points out that regulation on monitoring campaign expenditures, which limits reporting to the official 90-day campaign period, has resulted in significant underreporting of expenses.