TOKYO -- The average tax burden ratio for top American IT companies, collectively known as the "Big Four"-- Google, Apple, Facebook and Amazon -- is about 15%, or around 60% of the average among more than 50,000 large companies worldwide, a recent Nikkei analysis finds.

The existing corporate income tax system is ill adapted to a digitized economy, as it cannot fully account for intangible assets. Competitive tax cutting among nations has come to a head, due in part to the fiscal expansion undertaken to deal with the coronavirus pandemic. Policymakers around the world now see an increasing need for global tax rules.

Using QUICK-FactSet, Nikkei analyzed financial data from about 57,000 large companies around the world, calculating their tax burden ratios by dividing their "corporate tax, etc." in accounting terms by their pretax profits. It then compared the average ratios between 2018 and 2020.

The average of ratios for Google parent Alphabet, Apple, Facebook and Amazon.com was 15.4%, 9.7 percentage points lower than the global average for all companies of 25.1%.

The tax burden on Big Tech companies is low because "their profit derives almost entirely from intangibles that can easily be located in low-tax jurisdictions," said Reuven S. Avi-Yonah a professor at the University of Michigan Law School.

Internet companies offering services around the world often maintain intellectual property and other assets in countries with low corporate tax rates, while they rake in profits in the form of licensing fees from various countries. This allows them to minimize their overall tax burden. Google, Apple and Facebook, for example, have their European headquarters and other operations in Ireland, where the corporate tax rate is a low 12.5%. The digitization of the economy has thus led to widening discrepancies in the tax burden faced by companies in different business categories.

The average burden in the electrical goods, automobile, machinery, chemical, and materials and energy industries, for example, was 30.7%, roughly double that of the Big Four tech companies. Ratios topped 20% for many companies in the five industries, such as Toyota Motor's 24.8%. The average burden ratio for Japanese companies came to 28.3%.

Tax systems tend to focus on sources of profit, such as factories and other tangible assets, more than on intangible assets, said Mindy Herzfeld, a professor at the University of Florida's Levin College of Law. Companies' business models are changing dramatically, however, and "current tax laws have not been able to respond to the change yet," Hertzfeld pointed out.

Big Tech companies are cool to the idea of global tax harmonization.

"Google's overall global tax rate has been over 23% for the past 10 years, in line with the 23.7% average statutory rate for members of the Organization for Economic Cooperation and Development," said Karan Bhatia, Google's vice president for government affairs and public policy, in response to a question regarding Nikkei's survey findings.

"Corporate income tax is an important way companies contribute to the countries and communities where they do business, and we would like to see a tax environment that people find reasonable and appropriate," he added.

Apple maintains that its tax payments are legitimate, saying, "As the largest taxpayer in the world, Apple pays every dollar it owes in every country around the world." Amazon said it pays taxes in compliance with related laws and regulations in all countries and regions where it does business. Facebook declined to comment. 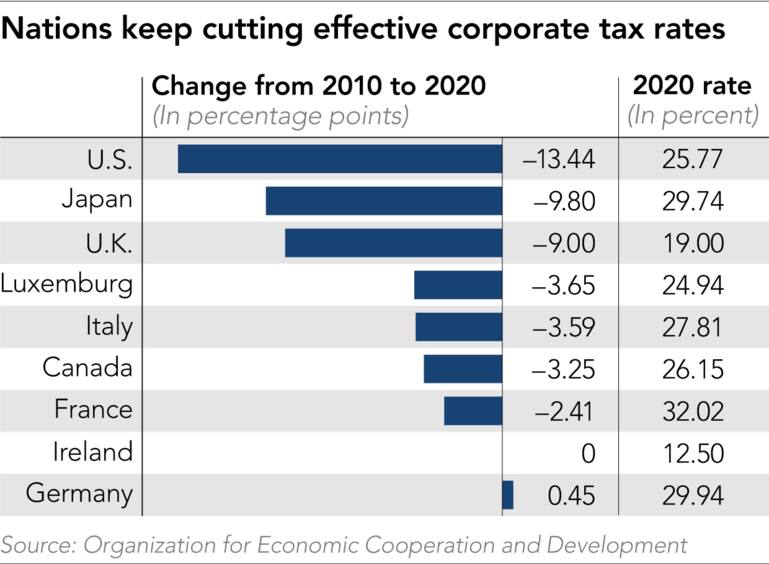 The contribution of corporate taxes to total tax revenue has fallen in many countries. Corporate income taxes as a share of gross domestic product in the U.S. had previously hovered around 2% since 1990, but plunged below 1% in 2019. It has fallen to less than 3% in the U.K. and Italy.

In Japan, the share of corporate taxes to GDP remains in the 4% range, although it has fallen by about 2 percentage points since 1990.

Countries have been competitively cutting corporate tax rates in an effort to attract global companies. These successive cuts have lightened their burden in what critics call "a race to the bottom." 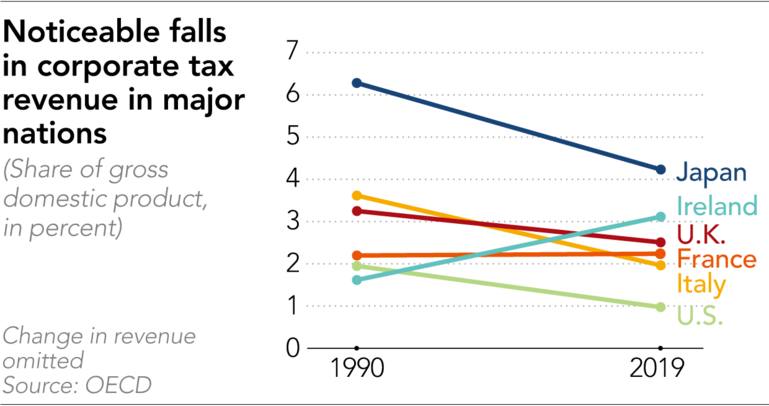 Meanwhile, companies, particularly in the U.S. and Europe, have spent their tax windfall mainly by rewarding shareholders through stock buybacks and other means. This has contributed to growing wealth and income inequality.

But the tide appears to have shifted since the start of the year. U.S. President Joe Biden is planning a corporate tax increase, partly to cover the huge spending package his administration pushed through to deal with the economic slowdown from the COVID-19 pandemic. With the U.K. and others making similar moves, the global trend toward tax cutting may finally come to a halt.

A review of tax rules aimed at forcing tech companies to cough up more is nearing completion. The OECD has proposed global revisions to tax rules, such as the introduction of a minimum corporate tax rate. Proposals from the Biden administration include sharing taxation right among nations to reach around 100 multinational companies. International negotiations are moving ahead with an eye toward reaching an agreement by the middle of this year.

The trick will be to correct imbalances in the tax burden while maintaining economic growth. To redress the skewed distribution of wealth that threatens to undermine democracy, countries should cooperate to reach a consensus on the appropriate tax burden for global companies.