TOKYO/MUMBAI -- While the immigration policies of U.S. President Donald Trump give the impression of slamming the door on foreign talent, a closer look at visa data shows that the big four American tech companies are accelerating their drive to attract and retain highly skilled professionals.

In contrast, the biggest losers are Indian information technology companies, such as Cognizant Technology Solutions, Infosys and Tata Consultancy Services, who had long been the biggest employers of foreign IT talent in the U.S.

At issue is the H-1B visa, the permit that allows foreign talent with specialized skills to reside and work in the U.S. for up to six years. People from India, especially with computer skills, account for the biggest percentage -- 74% -- of H-1B visa applicants, followed by those from China at 11%.

Workers who enter the U.S. under the H-1B have the opportunity to apply for permanent residency and start their own business. The prospect of the American dream has enabled the U.S. to attract some of the best minds in the world and has been the engine of innovation in the country. However, the Trump administration issued an executive order in 2017 making the screening of H-1B visa applications stricter.

But it is not a blanket reduction.

The India trio of Cognizant, Infosys and Tata saw their H-1B visa approvals tumble 59% in fiscal 2018.

The difference is in salaries.

The median annual income offered by the three major Indian-affiliated IT companies to H-1B visa beneficiaries is about $80,000.

The median annual income offered by the four big U.S. tech groups to H-1B visa beneficiaries is relatively high, at between $120,000 and $150,000, and continues to rise. 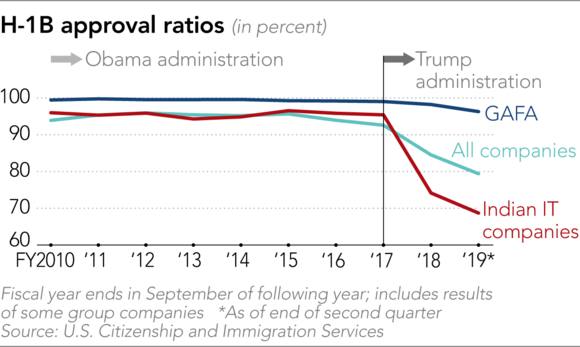 When Ryo Sanada, a 35-year-old Japanese entrepreneur, tried to recruit an engineer from India to launch an internet-based education business in Silicon Valley, the H-1B was not approved.

"During the Barack Obama administration, it was said that anybody could acquire the H-1B in three weeks," he said.

After four months of negotiations with U.S. authorities, Sanada raised the annual salary for the Indian engineer to close to $130,000, from the initially planned $80,000, and the visa was approved.

The emphasis on high salaries comes as a headache for the Indian-affiliated IT companies, whose low-cost operations were their core competence.

Data suggests that the Trump administration is taking aim at the IT outsourcing business. There has been criticism in the U.S. that Indian IT companies were attracting low-wage workers from overseas to the U.S. under the title of "highly skilled professionals," costing American engineers their jobs.

India's Infosys has hired an additional 10,000 people in the U.S. over the past two years. For the company, the business in the U.S., where demand for outsourcing is strong, is a cash cow.

As the tougher visa screening has made it more difficult to recruit Indian engineers, Infosys has had no choice but to increase the hiring of Americans.

In the fast moving world of tech, the presence of an innovative, skilled worker could be the game changer. The talent war is not only an American issue, but equally relevant in Canada, the U.K. and Japan.