Rates of vaccination are on the rise in advanced nations but COVID-19 cases are also increasing. (Source photos by Reuters)
Datawatch

COVID-19 casts shadow over US and European economic optimism

TOKYO/NEW YORK/VIENNA -- Shadows are looming over an economic scenario in the U.S. and Europe, in which a rapid recovery could be achieved if COVID-19 vaccinations are accelerated.

The optimistic scenario is being shaken because the highly infectious delta variant of the coronavirus, first detected in India, is wreaking havoc, applying the brakes to improvement in sentiment among businesses and consumers. The plan to achieve an economic recovery by easing behavioral restrictions on vaccinated people has come to a crossroads.

People wearing face masks have noticeably increased in the city of New York in August. An international auto show, planned at the biggest event site in Manhattan, was cancelled due to the spread of infections of the delta variant. As the annual show is usually visited by some 1 million people, the cancellation dampened expectations of local economic recovery.

Service consumption has also come to a standstill after picking up along with progress in vaccination. With the start of this year, the pace of decreases in the number of restaurant reservations from 2019 began to slow but reached an average 9% in the early part of August, compared to a 5% decline in July, according to OpenTable, an online restaurant reservation service provider.

Although "revenge spending" after being forced to stay indoors in 2020 was expected to gather steam in 2021, consumer sentiment is starting to weaken. 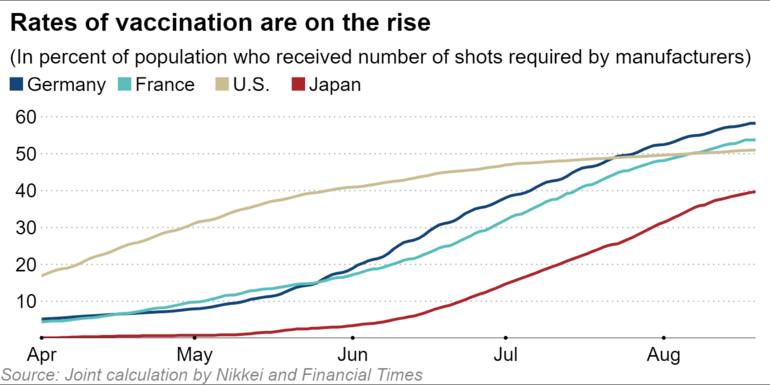 The University of Michigan Consumer Sentiment Index, based on replies from consumers asked about their household economy and economic forecast down the road, fell to the lowest figure in about 10 years on a preliminary basis in August. Disappointment from the resumption of the pandemic, betraying expectations of an end to it, pulled the index below the level of 2020 when almost all economic activities were halted.

The U.S. Purchasing Managers Index also shows that the improvement of business confidence has hit a ceiling, with the composite PMI falling in July for the second consecutive month. Research firm Oxford Economics lowered its forecast of real-term U.S. economic growth in 2021 to 6.1% from 7.0% in early August.

At present, the U.S. economy is widely expected to maintain high growth, despite a slowdown, in excess of its potential growth rate. But many participants at the Federal Reserve's Federal Open Market Committee meeting in late July remarked that the delta variant was "posing downside risks to the economic outlook," according to the gathering's minutes. 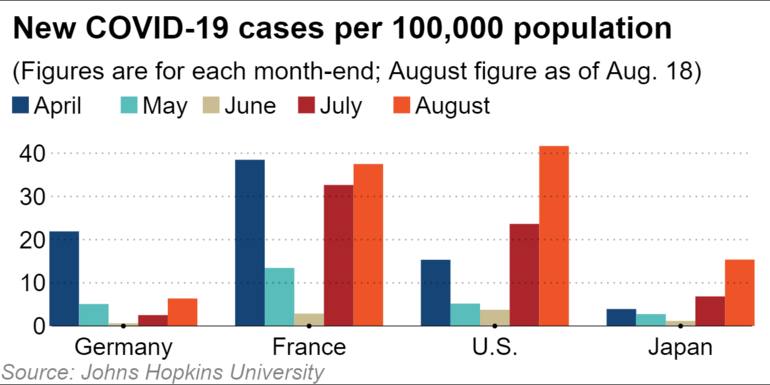 The U.S. administration will begin introducing a third shot in late September for people already vaccinated with the two-shot regimen, to crack down on infections by the delta variant. With the city of New York requiring individuals, effective in mid-August, to show proof of vaccination before entering restaurants, people calling up a QR code on their smartphones at the entrance of restaurants have become a common sight on the streets of the city.

But if the explosion of infections is not halted, anti-coronavirus strategies will require fundamental changes, including strict crackdowns on economic activities.

A hotel in Capri, a top Italian resort destination island in the Mediterranean, is fully booked in August, its 56-year-old manager said happily. Demand has kept picking up for tours based on such measures as making use of the vaccination passport put into full-scale practice by the European Union in July. 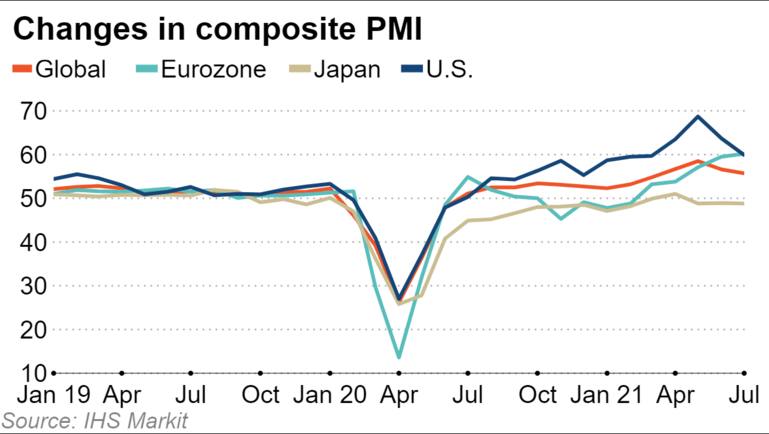 Even in Europe, however, the delta variant is casting shadows over its economic outlook. The economic sentiment indicator, compiled by Germany's Center for European Economic Research (ZEW), came to 40.4 in August, down 22.9 points in the third consecutive month-to-month fall.

Christine Lagarde, president of the European Central Bank, warned that the delta variant "could slow down" the recovery in services, "especially in tourism and hospitality."

The delta variant is also on a rampage in Asia, throwing factories and ports into turmoil. Toyota Motor will slash global production for September by 40% from its previous plan as the spread of infections in Southeast Asia adds to supply troubles for the biggest Japanese carmaker. China has shut down a key terminal for container ships. 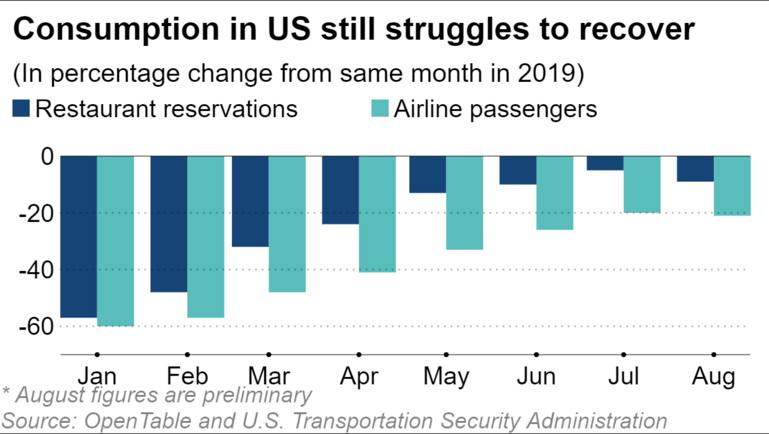 If the chaotic situation drags on, price rises resulting from supply-side troubles may add to concern about the outlook for consumption in the U.S. and Europe.

The workability of U.S. and European strategies to achieve economic recovery and contain coronavirus infections at the same time is being tested.