Analysts worry aviation industry bailouts and 'nationalization' are on the way An estimated one-third of the global airline fleet has been grounded by the coronavirus pandemic. (Source photo by Reuters)
SHINICHI HASHIMOTO, Nikkei staff writerAugust 23, 2020 04:52 JST
CopyCopied

TOKYO -- The aviation industry has taken a direct blow from the coronavirus, with an estimated 8,600 aircraft -- one-third of the global fleet -- grounded during a month that is normally the high season for vacations.

A total of 383 planes stood idle at Roswell International Air Center in New Mexico, known an "aircraft boneyard," as of Aug. 18, according to Cirium, a U.K. aviation analytics company.

The number represents a sharp increase from 103 at the beginning of this year. Many U.S. airline companies are parking Boeing's 737s and 777s at Roswell for fees of $10 to $14 a day.

As airline companies around the world reduce flights, they are being forced to store the planes at boneyards such as Roswell.

Cirium puts the number of such aircraft at 8,600 as of mid-August, or roughly a third of the global fleet. Furthermore, demand for travel is not recovering rapidly.

Data from British airline information company OAG shows that in Europe, where mobility restrictions were eased, international flights in the third week of August were still about 60% less than at the same time last year.

Lufthansa CEO Carsten Spohr said that 200 planes out of the airline's entire fleet of 760 will still be grounded in 2022. Also expressing pessimism is Boeing CEO David Calhoun, who said it will take three years for passenger demand to recover. 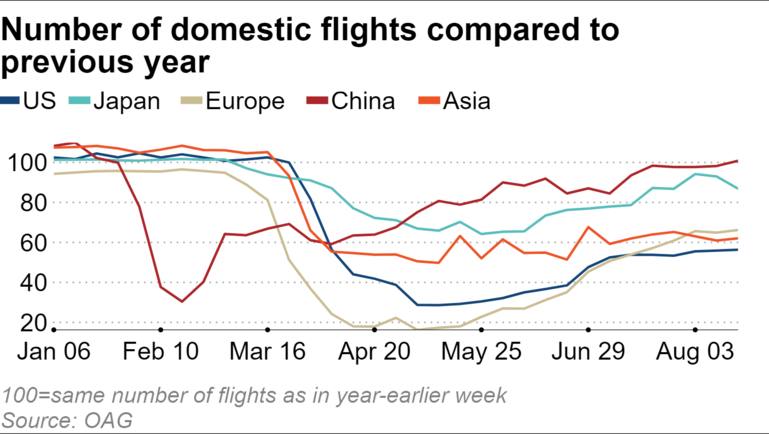 The glut of planes will be a continuing burden for the airline industry.

IBA, a British aviation data and advisory company, said that 34 airlines have failed and the final number this year might reach 70. The figure in 2019 totaled 27.

The leasing industry typically pays for the initial cost of an airplane and has been one of the pillars of aviation industry growth, supporting budget carriers. Currently, half of the global fleet is owned by leasing companies.

New orders to build aircraft are also declining: More than 500 orders for Boeing and Airbus planes were canceled since March. A major cancellation was by Avolon, an Irish leasing company 70%-owned by China's Bohai Leasing and 30% by Japan's Orix Corporation. The company has canceled more than 100 aircraft since the outbreak of the pandemic.

In 2019, 4.5 billion people traveled globally, marking a threefold increase over the past two decades. Setting the stage for that growth was the privatization of state-owned carriers and deregulation in the airline industry.

But now, the current crisis could push governments around the world to bail out airlines, potentially leading to more state influence and control over the industry and jeopardizing the basis of past growth.

"We could expect the majority of global long-haul airlines to undergo a gradual nationalization process, leaving a collection of airlines that purely serve government purposes," said Mark Manduca, an analyst at Citigroup.