COVID-19 transmissions flatten out or slow down in 107 countries Where masks are worn, the infection rate is going down. Where vacations are underway, transmissions are going up. And in Japan, a professor at a medical university wonders whether "people might be gaining immunity against the coronavirus by catching a cold and gaining cross-immunity." (Source photo by AP)
YUMIKO OSHIMA, RINTARO HOSOKAWA and KENJI ASADA, Nikkei staff writersAugust 31, 2020 17:38 JST | North America
CopyCopied

NEW YORK/GENEVA/TOKYO -- The spread of the novel coronavirus appears to be slowing, with the number of daily new infections either staying the same or decreasing in 107 countries and regions.

The decrease, as measured by the number of new infections per 100,000 people, is even taking place in the hot spots of the U.S. and Brazil. Experts point out that wearing masks and maintaining social distance have worked in preventing the virus's spread.

Nikkei analyzed data from the World Health Organization and Johns Hopkins University, and compared the seven-day moving average for daily cases with where it was two weeks earlier.

On the other hand, the rolling average increased in 81 countries compared to two weeks earlier. 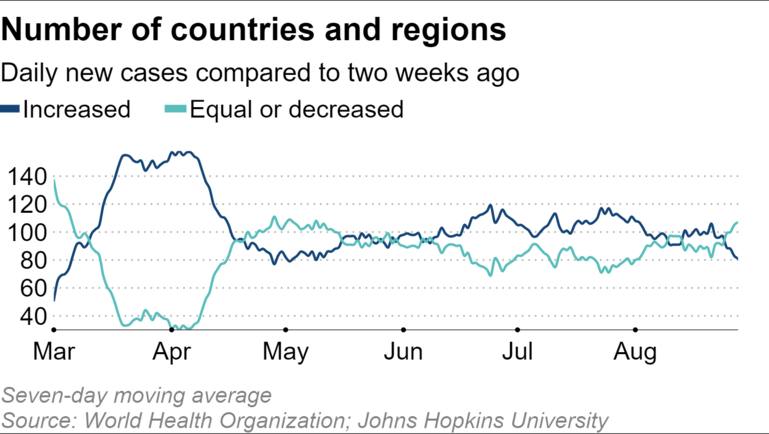 Friday was the fourth straight day for countries gaining a handle on the infection rate to outnumber those with rising transmissions.

In the U.S. state of California and Texas, the number of new cases is becoming smaller. California Gov. Gavin Newsom announced a plan to slowly reopen the state's economy while closely monitoring new infections in each county.

"We're going to be more stubborn this time," he said, "and have a mandatory wait time between moves. We didn't do that last time."

Data from Johns Hopkins University shows that the three-day moving average of daily new cases in California peaked at 11,600 on July 29, before falling to 5,400 on Aug. 26.

There have been two waves in the U.S. The first peaked on April 11, when the seven-day moving average of daily new cases per 100,000 reached 9.7.

The second peak came at the end of July, when the reading was 20.4. As of Friday, the number was 12.7, thanks to more Americans wearing masks. 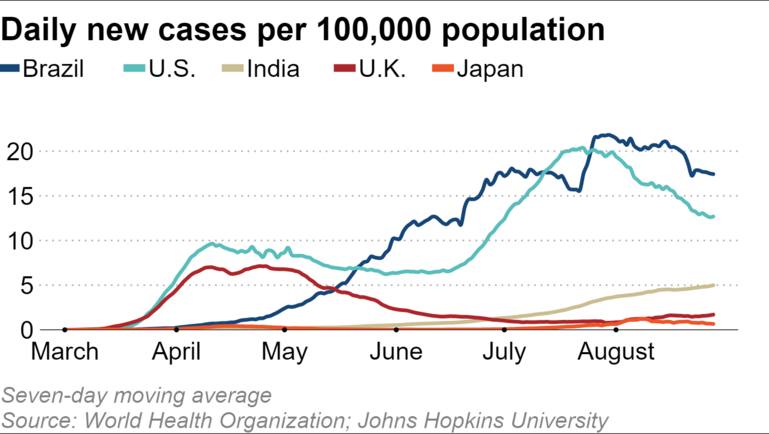 Mitsuyoshi Urashima, a professor at the Jikei University School of Medicine, noted that more countries are tackling the outbreak with more seriousness. "We now know that where there is a high risk of infection," Urashima said, "authorities are addressing [the situation] by implementing measures such as testing."

Atsuro Hamada, a professor at Tokyo Medical University offered a hypothesis. "People might be gaining immunity against the coronavirus by catching a cold and gaining cross-immunity," he said. "By this, herd immunity could be emerging, leading to fewer new cases." 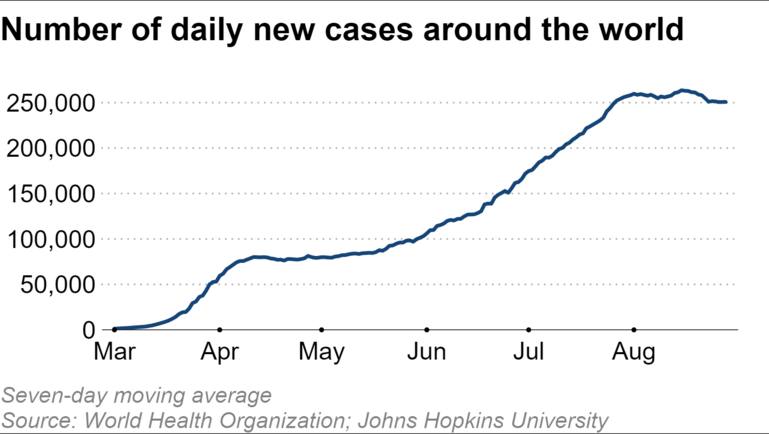 However, the risk remains that new cases will begin climbing again.

For example, in India, the number of new cases per 100,000 was 5 on Friday, twice what it was at the end of July. India is now at 3.4 million transmissions, third-most in the world and closing in on Brazil, which has had 3.8 million infections.

New cases are also on the rise in Europe due to people traveling on summer vacation. As the northern hemisphere moves toward winter, people's throats will be dryer than they are now, and dry throats are more prone to COVID-19, according to Nahoko Shindo, a WHO senior adviser.

While vaccines remain under development, Shindo said, governments "need to closely monitor the infection trend and continue to implement policies."