BEIJING/TOKYO -- China has once again started letting the yuan weaken in what appears to be an effort to shield exporters from the blow of additional U.S. tariffs, but the redback's modest decline reveals authorities are far more concerned about a currency that is too weak, not too strong.

In fact, over the past several years, the yuan has been under great selling pressure. If Beijing were to entirely let the market determine the level of its currency, the yuan would likely be far weaker than it is now, calculations show.

When U.S. President Donald Trump announced earlier this month a new round of tariffs on Chinese imports that go into effect in September, the yuan fell below the psychologically important level 7 to the dollar. This led Washington to brand China as a "currency manipulator."

But Fred Bergsten, a senior fellow at the Peterson Institute for International Economics, said that label was unjustified. Bergsten wrote in a statement that until 2013 China had intervened to weaken its currency, but since then, "it has on balance intervened heavily on the other side of the market: selling dollars to keep the [yuan] from weakening."

Shifts in Beijing's currency policy are seen in its handling of the daily reference rate. Each trading day, the People's Bank of China, the central bank, sets the midpoint of the yuan's trading band against a basket of currencies. The trading band prevents movements greater than 2% above or below the midpoint.

This policy was tweaked in August 2015 -- along with a devaluation of the yuan -- to have the rate set near the previous day's close in Shanghai. This was meant to better reflect supply and demand for the currency and was seen by many as a precursor to allowing the yuan to float freely. But the currency plummeted after the change, spurring an exodus of capital from China and forcing authorities to reverse course. Beijing said in December of that year that it would set the reference rate in such a way as to smooth out the yuan's swings, leaving room for intervention again.

Had the August 2015 system remained in place, the yuan might today trade at 11 to the dollar. Instead, the currency averaged 6.74 versus the greenback between January and March, not far off the current reference rate, according to calculations by Nikkei and the Japan Center for Economic Research. The divergence between these figures shows the amount of selling pressure on the yuan that has not been priced into the reference rate. Chinese authorities are always conscious of the risk that a sudden fall in the currency will cause wealthy residents to send their money out of the country, fearing that their private assets will not be safe.

But Beijing is allowing the yuan to fall now because it can no longer sit back and watch as exporters shift operations abroad.

The currency has depreciated 8% since June 2018, when the U.S. formally announced its first round of punitive tariffs on Chinese goods. At this level, the tariffs only cost China about $10 billion a year in lost exports to the U.S. And China's overall global exports get a $110 billion boost, after taking into account higher sales outside the American market. But market expectations for such a depreciation put Beijing in a bind. If it buys yuan to prop up the currency, those yuan go onto the central bank's books, taking liquidity out of the market, in effect, tightening the money supply.

To offset these effects, "the PBOC often takes steps such as cutting interest rates, thereby creating the risk of a vicious cycle as downward pressure on the yuan increases," said Junichi Makino of SMBC Nikko Securities. A narrower gap between U.S. and Chinese interest rates -- the general trend over the past few years -- tends to encourage selling of the Chinese currency. 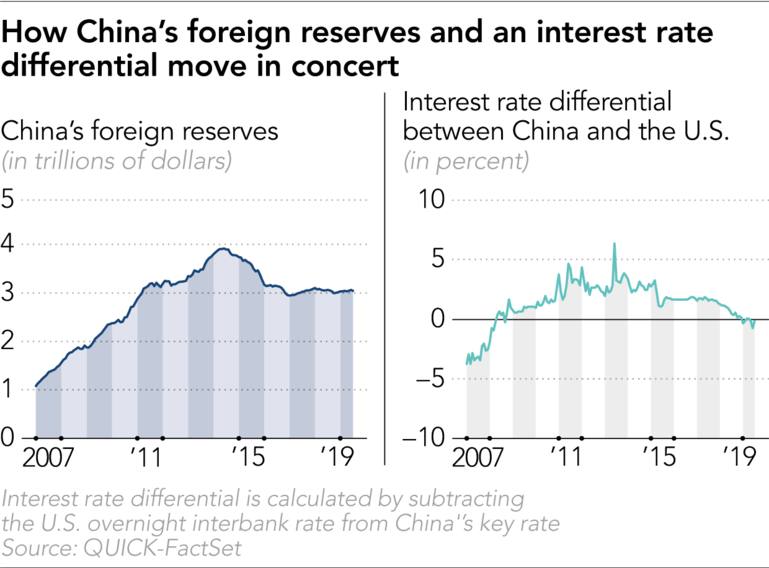 These factors help explain why the currency's drop in recent days has been fairly modest. The reference rate weakened just 1.5% or so in the nine trading days through Friday, compared with about 4.5% in just three days following the August 2015 devaluation.

Beijing's cautious handling of its currency underscores the struggles of an economic superpower that has yet transform itself into a normal market economy.