Mainland movie industry no longer reliant on outside help

LONDON -- Mainland China's movie industry has long relied on help from elsewhere, but with several domestically produced movies cleaning up at the Chinese box office recently, the common model of coproductions may be on the way out.

A look at sales figures seems to confirm that mainland China's movie industry can do just as well on its own as it can with outside help -- if not even better.

Data provided by Entgroup, a research company that specializes in the country's entertainment industry, shows that the monthly box office revenue of domestic movies in the top ten best sellers has risen since 2013, while that of coproductions has shrunk.

Half of the top 10 this year were made solely at production houses based in mainland China, earning $1.7 billion between them. The rest, coproductions mainly with companies in Hong Kong and India, grossed roughly a third of that figure. 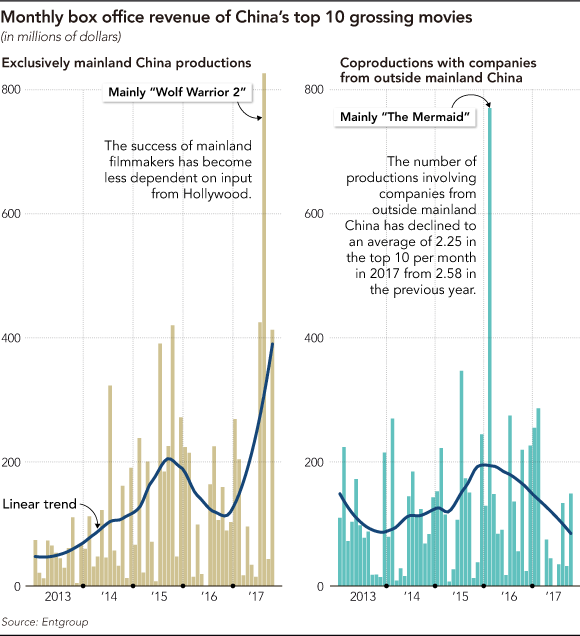 This constitutes something of a turning point for Chinese cinema.

Last year, partnership productions were far more successful, with seven movies in the top 10 yielding a total of $1.1 billion.

There is a growing feeling that Chinese filmmakers are now creating content of a much higher standard -- at least for a domestic audience.

"Take 'Wolf Warrior II' for instance," said Winnie Wei, a consultant at Entgroup. "Actor and director Wu Jing speaks a film language that is easy for Chinese audiences to relate to. This has led to phenomenal box office success."

The popularity of China's first domestically made 3-D action movie suggests the producers had the right idea in terms of genre and national taste -- box office revenue on action movies has increased significantly over the past five years.

It also shows that a partner from a more established film industry is not essential if you want to make something to compete with Hollywood -- at the box office at least. Despite unspectacular performances overseas and criticism for its distinctly patriotic tone, "Wolf Warrior II" earned a record $870.3 million, thanks to sales on home turf.

That said, the input of foreign expertise is clearly still welcome in certain areas. Wu Jing recruited stunt coordinator Sam Hargrave to work on the movie, a man who can list "Captain America: Civil War" and "Atomic Blonde" on his resume, as well as a team who had worked on the "Pirates of the Caribbean" series.

With another "Wolf Warrior" movie in the pipeline and nine more productions from mainland companies scheduled for release this year, the future looks bright for Chinese cinema.

Beijing has expressed a desire for several industries to succeed, including soccer and artificial intelligence. The government announced a development plan to establish a world-leading AI technology industry worth $150 billion by 2030. If the initiative is to prove successful, it perhaps the government should follow the lead of the movie industry.