China's global push for mutual recognition of its vaccine passports could give it an edge in the tourism sector and allow its executives a head start in dealmaking. (Source photo by Reuters)    © Reuters
ANNA NISHINO, IORI KAWATE and YASUO TAKEUCHI, Nikkei staff writersApril 5, 2021 16:55 JST | China
CopyCopied

TOKYO/BEIJING/BRUSSELS -- China is on the verge of expanding its international influence as it adroitly wields what is arguably the most valuable export of the moment, COVID-19 vaccines.

The global rollout of Chinese jabs amid a serious shortage of doses, especially in low- and middle-income countries, is helping Beijing attain a new kind of soft power that could easily translate into global clout. At least 70 countries and territories have either approved Chinese vaccines or struck deals to receive doses from China.

That's where China's COVID outreach strategy begins. But Beijing is also championing the idea of vaccine passports -- government-issued cards or smartphone badges stating that the bearer has been inoculated against the virus -- as a prerequisite for international travel.

If the previous sentence had an asterisk, it would refer to a note stating that all inoculations must be carried out with China-approved vaccines.

While China works to leverage homegrown vaccines to enhance its pull with emerging and developing countries -- it has so far donated doses to 37 nations -- rich nations are preoccupied with securing sufficient doses to inoculate their own populations. The Nikkei has used information provided by the Chinese government's official website and UNICEF to estimate the scope of China's vaccine diplomacy. At least 70 nations and areas have either approved Chinese vaccines or agreed to purchase them.

In addition, more than 100 countries or territories have received COVID support from China when supplies of face masks, the deployment of doctors and other kinds of aid are also considered.

The recipients of this outreach include countries covered by Beijing's Belt and Road global infrastructure drive as well as Latin American nations that have not signed onto the program.

China had exported 115 million doses by the end of March, according to Airfinity, a British company that provides real-time life-science intelligence. By comparison, India had exported 63 million doses, most of which were vials of the AstraZeneca vaccine that it makes under license.

The European Union, meanwhile, has shipped 58 million doses to the U.K., Japan and other countries.

As for output, China has produced 230 million doses, far more than what the U.S., Europe or India have made. 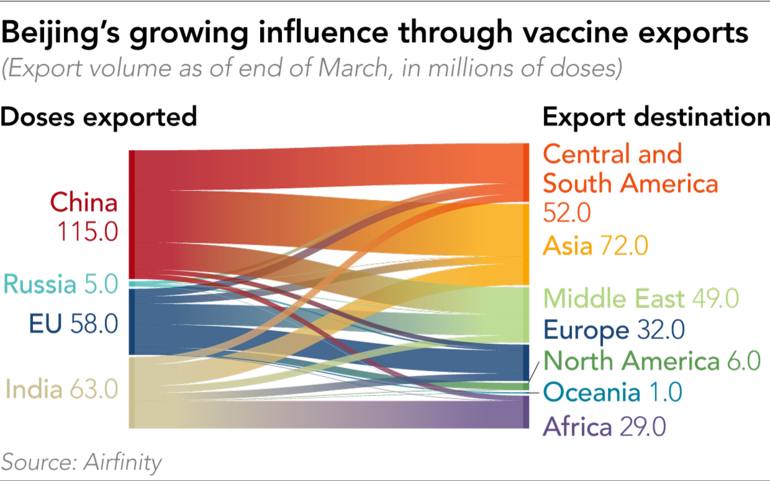 China started investing in vaccines immediately after the pandemic began, according to Airfinity CEO Rasmus Bech Hansen. It also led the pack in expanding the output of materials necessary in vaccine production.

China has also benefited from a relatively small number of cases since the initial outbreak in the city of Wuhan at the end of 2019. Its early success in combating the virus has allowed it to export large amounts of the vaccines it is now producing.

At home, China's vaccination program is focused on large cities. In Beijing, which has a population of over 21 million, some 9 million residents have been inoculated. Although cumulative doses inoculated stand at only eight per 100 people in China, there has been no public backlash against the government's export drive.

Another factor that has given China a leg up is the scramble among rich nations to secure vaccines for their own populations. The U.S., U.K. and other developed nations have contracted enough doses to inoculate their combined populations twice over, according to Duke University.

The EU has secured enough jabs to immunize over 1 billion people and accounts for more than 20% of all contracted vaccine doses. The situation has left many low- and middle-income countries with no choice but to rely on China and Russia for vaccine supplies.

Also hampering the West are delays that have caused some countries to switch to Chinese vaccines. India, meanwhile, has decided to suspend exports of the AstraZeneca vaccine it produces as it reprioritizes its own population. On Monday, India reported a record jump in the number of new daily infections, 103,558.

In the EU, Hungary has approved a Chinese vaccine. After receiving a shot of the vaccine developed by China's Sinopharm, Prime Minister Viktor Orban said, "I am working again, you can see I am perfectly fine, you should not be afraid either."

Beijing has made no secret of its intention to use its vaccines for diplomatic gain. Guyana abruptly scrapped an agreement with Taiwan to open a representative office in the South American country shortly after China offered to donate vaccine doses to the country.

Matthew Mingey, a senior analyst with Rhodium Group's China Macro & Policy team, warns that relying on China's vaccine largesse is not without risk. China, already campaigning for mutual recognition of health certificates, recently launched a coronavirus vaccine passport program. It has also begun issuing an International Travel Health Certificate and announced plans to simplify procedures for entry into China for foreign nationals who have been administered Chinese vaccines.

Some countries have rolled out vaccine certificate programs or plan to do so as a way to allow people to resume quasi-normal lives and economies to regain lost ground. Such programs would include rolling back restrictions at home and permitting bearers to travel internationally.

The passports are controversial as they could lead to a decoupling of sorts. China's International Travel Health Certificate will prioritize foreigners entry only if they have received a Chinese vaccine. But Chinese vaccines have not been approved in most industrial nations.

China is also asking other countries to recognize its passports, holding out the carrots of economic exchanges and Chinese tourists pouring across borders with their UnionPay cards.

Industrial nations that have not approved Chinese vaccines will have to weigh the benefits.

The Chinese Foreign Ministry is already negotiating with countries for mutual recognition of these certificates, stealing a march on other global powers.

The EU's vaccine passports -- digital certificates to allow free movement within the bloc -- will only be distributed to those who have received shots approved by the European Medicine Agency. The EMA has yet to start the process of evaluating Chinese vaccines.

If vaccine passports based on Chinese jabs come into widespread use, China would gain an edge in global tourism, and its business executives could gain a head start in making deals.