In 2020, China topped the U.S. in AI for the first time in terms of citations in academic papers. (Nikkei montage)
Datawatch

China overtakes US in AI research

TOKYO -- China is overtaking the U.S. in artificial intelligence research, setting off alarm bells on the other side of the Pacific as the world's two largest economies jockey for AI supremacy.

In 2020, China topped the U.S. for the first time in terms of the number of times an academic article on AI is cited by others, a measure of the quality of a study. Until recently, the U.S. had been far ahead of other countries in AI research.

One reason China is coming on strong in AI is the ample data it generates. By 2030, an estimated 8 billion devices in China will be connected via the Internet of Things -- a vast network of physical objects linked via the internet. These devices, mounted on cars, infrastructure, robots and other instruments, generate a huge amount of data.

China views AI as a way to make up for labor shortages in anticipation of a shrinking population, said Weilin Zhao, a senior researcher at Itochu Research Institute.

AI is used in a range of industries and greatly affects a nation's competitiveness and security. The U.S. National Security Commission on Artificial Intelligence, headed by former Google CEO Eric Schmidt, warned in a report in March that the U.S. may lose the initiative in AI to China. As the U.S. responds to this challenge, bilateral competition in AI has heated up -- with global implications. 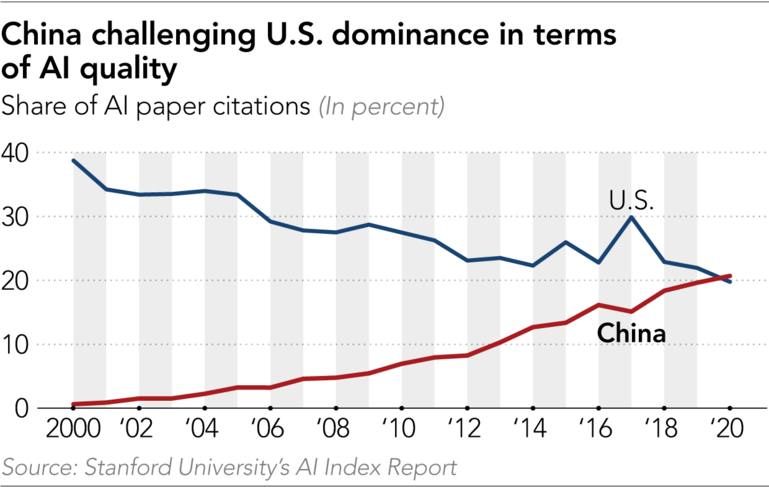 In June, a student named Hua Zhibing enrolled in Tsinghua University in Beijing. Hua has been in love with literature and art since birth, she says. But Hua is no ordinary student. "She" is an AI-powered virtual student whose image has been seen around the world on Weibo -- China's answer to Twitter -- and other social media.

Equipped with the ability to learn, Hua absorbs data such as text, images and videos, the university says. Hua has the cognitive abilities of a 6-year-old child. Within a year, the system will be able to think like a 12-year-old, China's state-run Xinhua News Agency predicts. Hua can write poems and draw. It is expected to be able to create websites in the future.

Hua is based on Wudao 2.0, an AI model developed under the leadership of the Beijing Academy of Artificial Intelligence. The aim is to develop a standardized form of AI capable of performing a variety of intellectual tasks once exclusive to humans.

Hua has advanced linguistic and image-processing capabilities, thanks to the work of more than 100 researchers. The tool has 10 times more parameters -- a measure of how smart an AI model is -- than the GPT-3 which made its debut in the U.S. in 2020 and drew attention for writing a smooth essay. 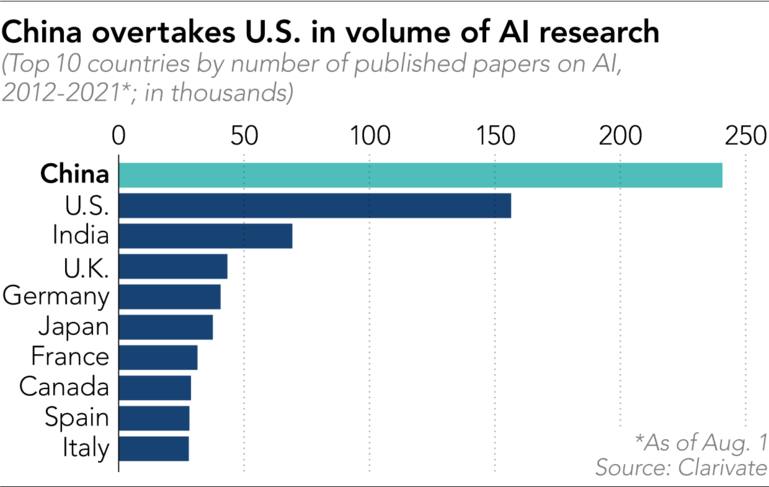 Last year China overtook the U.S. in terms of AI-related academic citations for the first time, accounting for 20.7% of the total, versus 19.8% for the U.S., according to a report from Stanford University. Since 2012, China has released 240,000 academic papers on AI, far outstripping the U.S. which has published 150,000, according to British research specialist Clarivate. Chinese studies have produced excellent results in image recognition and generation, among others.

Developing AI with advanced linguistic and other capabilities requires vast human and financial resources. Only "a handful of players" can do so, says Mamoru Komachi, an associate professor at Tokyo Metropolitan University who specializes in computational linguistics.

China has an array of academic institutions and companies with the firepower to stay on the cutting edge of AI, including Tsinghua University, Peking University, the Chinese Academy of Sciences, Baidu, and Xiaomi. These universities and companies all participated in the Beijing Academy of Artificial Intelligence, which created Wudao 2.0.

While U.S. companies and universities remain strong in AI, China's growing dominance is apparent. At the Conference on Neural Information Processing Systems, a leading international conference on AI, researchers from China accounted for 29% of the presentations in 2019, the highest share. The U.S. trailed with 20%.

While Chinese AI researchers have often performed well in the U.S., China has worked hard in recent years to develop talent at home. Tsinghua University and Shanghai Jiao Tong University, which are both known for advanced AI studies, as well as other Chinese universities, including Zhejiang University, the Harbin Institute of Technology and Northwestern Polytechnical University, are each reported to have around 2,000 AI researchers with published work.

In 2017, China adopted the "New Generation Artificial Intelligence Development Plan" with the aim of becoming the center of global innovation. Chinese companies are also becoming highly sophisticated technologically. One, iFlytek, has won an international voice synthesis competition for 14 years in a row.

It is clear that the U.S. is worried about China's rapid rise in AI. The fact that the U.S. is shutting out Chinese companies out of the country when it comes to the use of personal data that determines the performance of AI is evidence of this. If the U.S. and China continue to develop their own AI, a global clash over competing standards may be inevitable.