TOKYO/HANOI/SHANGHAI -- Higher U.S. tariffs from the trade war with China are altering patterns of world trade as exporters use third countries to bypass the duties, data reveals.

But an analysis conducted by Nikkei showed that while exports of machinery, electrical equipment and some other products have shown particularly sharp declines, shipments of such goods from China to the U.S. via Vietnam, Taiwan and Mexico rose during the same period.

While there has been a spate of moves by companies to relocate production from China to other parts of the world in order to circumvent punitive U.S. import tariffs, there is a possibility that "roundabout exports" that involve faking the origin of products are also increasing. 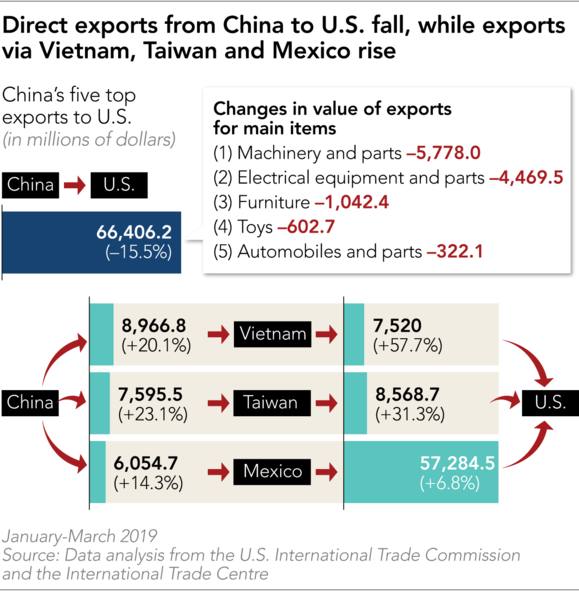 In the case when China's exports to the U.S. are classified in accordance with customs codes, the volume of products including machinery and parts, and electrical equipment and parts, slumped conspicuously.

In the first quarter of this year, exports of machinery and parts plunged by $5.77 billion from a year earlier, while exports of electrical equipment and parts plummeted by $4.46 billion year-on-year.

With the exception of toys, four of these five items have become subject to three rounds of punitive import tariffs imposed by the administration of U.S. President Donald Trump.

In the same three-month period, exports of the five items from China to Taiwan increased by $1.4 billion, or 23%, while such exports from Taiwan to the U.S. expanded by $2.0 billion, or 31%.

Exports from China to the U.S. via Mexico also increased. Mexico's exports to the U.S. surpassed those of China to become the biggest source in March.

These developments come as companies with production bases in China are increasingly suspending or reducing direct exports to the U.S., while sending materials and parts to other Asian countries and Mexico, where they are made into finished products and then shipped to the U.S. 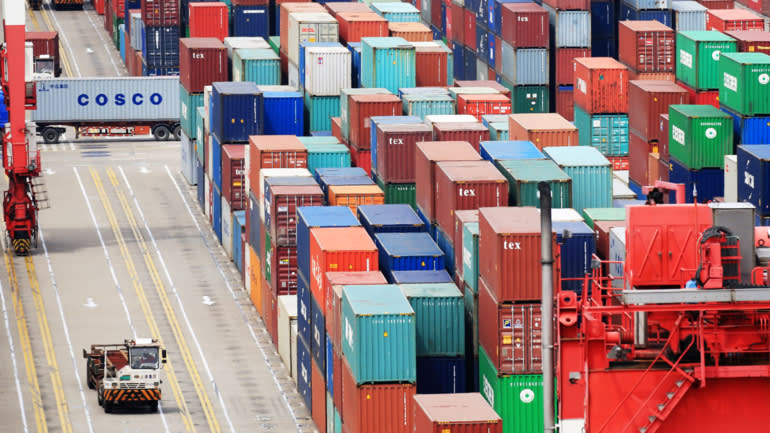 Chinese companies possibly ship products from China to other Asian countries and repack them there to disguise the place of origin. (Photo by Akira Kodaka)

Taiwanese electronics manufacturing service provider Compal Electronics has moved some of its production of routers and desktop personal computers from China to Taiwan and Vietnam, said company President Martin Wong.

Brooks Sports, an American maker of running shoes, plans to relocate most of its manufacturing operations in China to Vietnam, according to press reports.

U.S. camera manufacturer GoPro is also planning to move production of goods destined for the U.S. from China to Mexico.

New construction and expansion of factories in Asia is also set to increase. Among Chinese companies, Shenzhen H&T Intelligent Control, a maker of electrical parts, and leading TV manufacturer CTLGroup have decided to construct production facilities in Vietnam.

Vietnam tends to attract Chinese companies for manufacturing operations because it is geographically close to China and has a relatively inexpensive labor force.

Indirect exports to the U.S. from China are also considered to be increasing, although specific data are unavailable. One logistics company in Shenzhen exports to the U.S. via Malaysia for 17,000 yuan ($2460) per large container, including overhead expenses, a company official told the Nikkei, adding that such roundabout-route exports were increasing.

Chinese companies could be shipping items to other Asian countries and repacking them there to disguise their place of origin.

The items exported from Vietnam to the U.S. that have increased sharply since the introduction of punitive tariffs include timber, textiles and a raft of other upstream goods. While this involves the shipment of raw materials, the place of origin can be more easily disguised on upstream items as they are less recognizable than finished products.

As a result of these changing trade flows, Asian countries are growing worries that the U.S. might take up the issue of roundabout exports with them. In September last year, the Vietnamese government confiscated 600 commercial speakers marked as "Made-in-China" which were scheduled for export to the U.S. "Made-in-Vietnam" seals were instead pasted onto their packages, according to local press reports.

Changes in trade structures involving the U.S., China and other Asian countries might alter further. The U.S. government plans to raise tariffs on $300 billion-worth of Chinese imports, including those in the high-technology sector, to 25%. If the fourth phase of punitive tariffs is implemented, the "production shift of such products as semiconductors to Asian countries will get into full swing," Koji Sako, a senior economist at Mizuho Research Institute, said.

The economic effects of potential productions shift are expected to differ among countries. Mizuho forecast that the move would benefit Asian nations, estimating that the growth of Vietnam's gross domestic product would rise by about 0.5 percentage points.

The U.S., meanwhile, might be able to avoid increased prices by importing alternative goods, but fail to cut back on its trade deficit. Trump's recent announcement about plans to impose additional tariffs on Mexican goods was in part due to the increased import volumes from Mexico.

It could be that China will end up the sole loser as production and employment flows change. With China's exports down 3% overall in April on the year, it will struggle to compensate by increasing them to Asia and other countries.

The raging trade war between the U.S. and China is reshaping the global flow of goods, with one notable change emerging in East Asia.

Since the U.S. first slapped punitive tariffs on a broad range of imports from China, the six major Southeast Asian nations and Taiwan have started shipping nearly 1,600 new categories of products to the U.S. that they had never exported to America before.

Nikkei has discovered the changing pattern in Asian exports to the U.S. by analyzing data provided by the U.S. International Trade Commission, an independent federal agency. The data indicates that the global economy is adjusting to the disruptive effects of Trump's protectionist trade policy.

Since July 2018, when Trump first punished what he believes to be China's unfair trade and business practices, the seven East Asian economies have exported approximately 11,000 categories of products to the U.S. on the basis of the eight-digit "tariff code" level under the Harmonized Commodity Description and Coding System, international standards used to classify products for trade and customs purposes.

This trend has been particularly pronounced with regard to items on the U.S. list of imports from China subject to the tariffs, which account for over 60% of the new exports from the seven economies.

These exports amounted to some 30 billion yen ($277 million) during the period from July 2018 through March 2019. The amount is likely to keep growing if the U.S.-China trade spat continues.

Since upstream products like electrical components are less unique than finished products like smartphones, however, it is easier to fake their origin. Hence, the data may indicate growth of "roundabout exports," or exports of products made in China that are shipped via these areas.

Shuichi Maruyama in Mexico City, Kazuya Manabe in Tokyo and Akane Okutsu in Tokyo contributed to this report.