Dire straits for 100m Japanese, Americans and Europeans in these industries

NEW YORK/SILICON VALLEY/LONDON -- Job anxieties are spreading around the world as the coronavirus pandemic saps economic activity. With demand for travel and restaurant dining wiped out, three business sectors -- hotel and leisure, transport and retail -- appear headed toward widespread closures.

The three sectors employ a total of 100 million Japanese, Americans and Europeans, equal to a quarter of all workers in those economies. The blows to come will be immeasurable if the pandemic further spreads and halts more economic activity. There is urgent need for measures to prevent businesses from collapsing and shedding jobs.

Already, desolation is apparent. The scenes at Fisherman's Wharf, one of San Francisco's busiest tourist areas, have drastically changed since the city office issued a "shelter in place" order on March 17. Restaurants and hotels in the emptied area are hastily laying off workers as they have no choice but to suspend operations.

The impact of the pandemic is undeniably enormous, but the whole picture has yet to be painted, said Laurie Gossy, a representative of a San Francisco travel association.

On another side of the globe, in London, one pub that is usually so popular its revelers spill out into the street on Friday put up a makeshift notice that it would be temporarily closing. The pub was complying with a government decree issued earlier that day. Streets in the city are quiet as workers are advised to work from home. With or without the government decision, a restaurant planned to close due to the absence of customers, a female employee said.

Restrictions on the movement of people began in the travel sector as governments moved to safeguard their borders. They have since been drastically tightened as tens of millions of people on a number of continents have come under stay-at-home orders. The effects on daily life have been staggering and are giving rise to fears that more European and American businesses will curtail their operations in rapid-fire order.

Americans in the states of California and Illinois, Germans in Bayern, the country's largest state, and others in the U.S. and Europe have been asked to stay at home except for purchasing food, going to the hospital and taking care of other essential needs. In some regions of Italy, walking in parks and jogging are banned. The U.S. state of New York has told everyone to work from home.

These cascading restrictions will deal grave blows to the hotel and leisure industry, the transportation sector and retailers.

The three sectors account for a moderate 13% of gross domestic product in Japan, the U.S. and Europe, according to Eurostat, the European Union's statistics office, and economic research firm CEIC Data. In terms of employment, however, their presence is large. Consider the industries' 100 million-plus employees in Japan, the U.S. and Europe alone. In a sign of how bad things could get in the U.S., the Federal Reserve Bank of St. Louis is predicting an economywide unemployment rate of 30%.

A 37-year-old New York restaurant worker was laid off following the introduction of business restrictions on restaurants and bars. After 10 years of working in the sector, she now worries about her immediate future. According to data compiled by New York, restaurants and bars in 2018 employed 10% of the state's workforce.

Although Japan has not restricted business operations or outings yet (many big sports and other events have been canceled or postponed), the three sectors will be affected if the pandemic wallops the country like it has other parts of the world.

The ratio of workers in the sectors to the total workforce is 26% in Japan, compared with 27% in Spain and 24% in the U.S. Spain's figure is the highest in the EU.

The creditworthiness of hotel and airline operators is now a concern. The occupancy rate of Marriott International, the big hotel multinational out of the U.S., has fallen below 25% in North America and Europe. 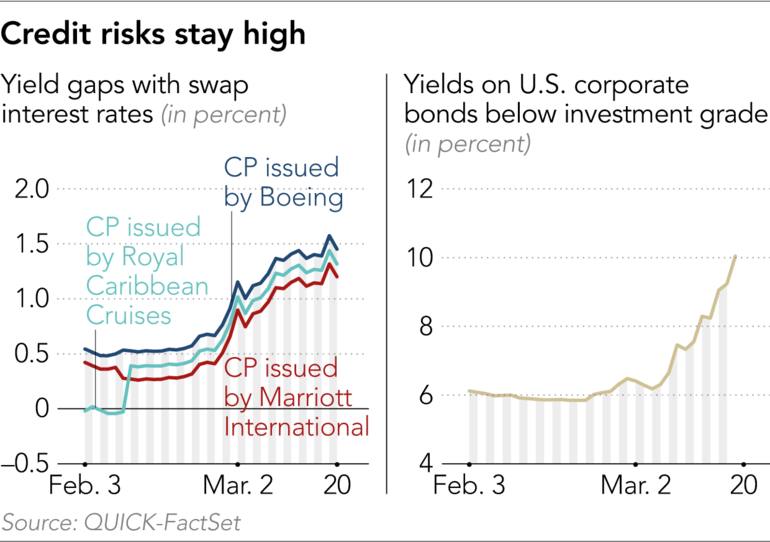 Yields on commercial paper and corporate bonds keep rising. In the U.S., the yield on a leading index of corporate bonds that are below investment grade jumped to 10.81% for the first time in about 10 and a half years. Since the end of last year, companies in the three sectors have lost $1.44 trillion from their combined market capitalization.

If business failures increase, governments around the world must not hesitate to introduce such measures, especially to minimize job losses and other forms of financial pain.