Coronavirus spreads in US states that eased restrictions NEW YORK/TOKYO -- All 50 states in the U.S. have now at least partially reopened their economies following weeks of social distancing. But with the easing of stay-at-home restrictions, more states are seeing new outbreaks.

The situation has worsened in 24 states after they loosened restrictions. The summer vacation season in the U.S. kicks off with Memorial Day on May 25. If the economy reopens too soon, the country runs the risk of a second wave of infections, which would force a return to strict social distancing.

In the U.S., the pandemic hit hardest in big cities on the Northeast and West Coast, such as New York and Seattle. But since late April, the focus has shifted to the South and Midwest. New infections have peaked on the coasts, notably in the state of New York, and are now declining. But in other regions there is no sign of a drop in infections.

In Texas, the second-most populous state, new infections rose after it restarted economic activity on May 1. In April, the state averaged 827 new cases per day; that rose to 1,161 in May. New cases hit a record 1,801 on May 16, bringing the total number of infections to more than 50,000.

Similarly, in the southwestern state of Arizona, the daily average for new infections was a relatively low 215 in April. But the number jumped 70% to 365 cases per day after the state reopened its economy on May 4. 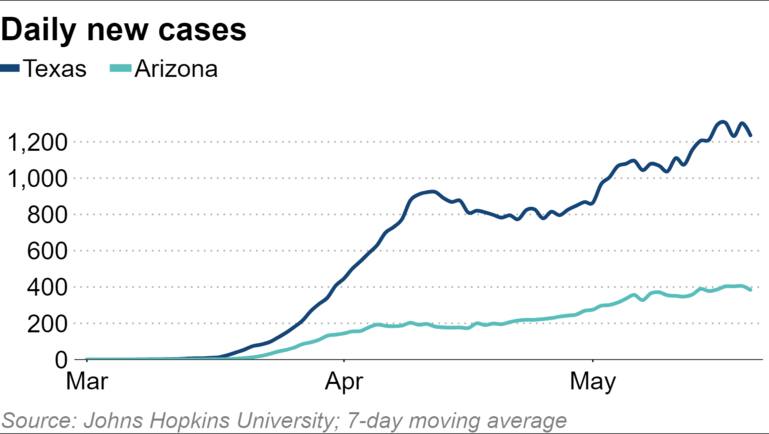 Google has been monitoring people's movements using aggregated, anonymous data from its map app. According to its latest data, the amount of time people spend at home has fallen 5% from the peak in the first half of April.

In states that have reopened their economies, movement has picked up, and the number of people at retail outlets and entertainment establishments has risen. People are driving more: Gasoline inventories began declining in May and oil prices have bottomed out.

The epidemic could flare up again if states get the timing wrong on loosening or tightening restrictions. Columbia University estimates that if the U.S. had started stay-at-home orders a week earlier, in mid-March, the death toll would have been less than half its current level. If the orders had been issued two weeks earlier, the 65,307 deaths reported as of May 3 would have been 11,200, the study found, more than 80% lower. Balancing efforts to hold new infections down and restart the economy is a challenge. Republicans, led by President Donald Trump, have prioritized getting the economy moving. Many of the states that reopened early have Republican governors. Google data also shows that people in Republican states tend to go out more.

By contrast, Democratic governors on in the Northeast and the West Coast have been more cautious about reopening. The drop in new cases in coastal areas may reflect that difference in approach. In some states, stay-at-home orders have been in place for nearly two months, and people are increasingly anxious for life to return to normal. But opening up the economy too soon risks an uncontrolled outbreak, according to Anthony Fauci, head of the National Institute of Allergy and Infectious Diseases and a key member of Trump's coronavirus task force.

As summer approaches there is a risk of more people traveling long distances, spreading the disease far and wide.