Emerging countries such as India, Pakistan and Bangladesh are reinforcing their presence in the growing trend of cross-border remote work..
Datawatch

600 million people potentially could do jobs remotely; Japan being left behind

TOKYO -- The COVID-19 pandemic has been pushing businesses and other entities to expand online work beyond national boundaries so they can keep operating even if workers can't cross borders or must return home.

As international economist Richard Baldwin's prediction that an age would come when remote work would be mainstream steadily becomes a reality, emerging countries such as India, Pakistan and Bangladesh are reinforcing their presence in the growing trend.

In 2020, workers in emerging countries accounted for 82% of remote work, an increasing share, the University of Oxford said. Their median hourly pay is $10, compared to $33 in the U.S.

The International Labor Organization maintains that many jobs can be performed online, estimating that roughly one-sixth of workers, including information technology engineers and financial professionals, can work remotely. This means the global workforce has some 600 million potential remote workers.

Some developed countries, such as Japan, are being left behind in this trend and may see their international competitiveness further weaken unless they quickly nurture their human resources skilled in digital technology. The number of people around the world who were registered with Freelancer, a leading Australian site connecting those who offer and seek online jobs, stood at 50.8 million at the end of 2020, an increase of 8.9 million from a year earlier. By June, the number had risen to 53.1 million, up nearly 30% from before the outbreak of the novel coronavirus.

Jobs offered through English-based online work brokers in general had similarly increased 30% as of July from two years earlier, according to a survey by the University of Oxford and others. Border restrictions due to the pandemic lie behind this global development.

The issuance of visas by the U.S. is decreasing sharply. In fiscal 2020, through September 2020, 124,983 visas were issued in the H-1B category, which allows employers to hire foreign workers in digital technology and other professional occupations, down 30% from the previous year. The number is decreasing at a faster pace of 50% this fiscal year.

"America First" policies instituted by former President Donald Trump have made it difficult for foreigners to obtain visas, and restrictions imposed on international travel because of the virus have increased the difficulty.

Major information technology companies that have dispatched a large number of engineers to North America, such as India's Infosys and Tata Consultancy Services, have seen their visas restricted. Yet their revenue in North America has not decreased. Infosys, for example, logged $8.3 billion in the business year ended in March, up about 10% from the previous year.

IT companies have overcome the crisis not only by increasing local employees but also because engineers have worked remotely since returning to their home country.

Remote work enables the allocation of workers regardless of location and visas and reduces risks in providing services, said Venkataraman Ramakrishnan, the former chief financial officer of Tata Consultancy Services. 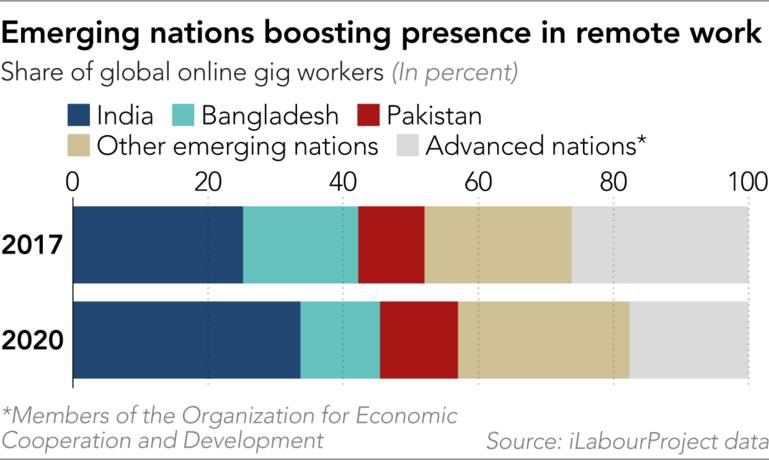 The U.S. debated regulations on offshoring -- the relocation of work from one country to another -- in the early 2000s, when the use of IT gathered steam. After the relocation of software development and other work to low-cost countries accelerated, offshoring became a focal issue during the 2004 U.S. presidential election, with critics blaming it for a loss of American jobs.

The COVID pandemic may add fuel to U.S. protectionist moves aiming to restrict the relocation of work to other countries. But the growth of demand for remote work, which enables job offers to be placed and accepted without regard to national borders, is unstoppable.

One worker at a website builder in India keeps getting more orders via Freelancer from U.S. investment banks, Australian media and other companies, most of which are located outside India. Customer service can be performed without going through tangled visa procedures, eliminating the need for a marketing team, he said.

One of the laggards in this global trend is Japan.

Japan accounts for a meager 0.1% of the work orders won through job brokers around the world, according to Oxford and other sources. Without establishing a system for making flexible use of online workers, like those who are increasing overseas, and also hastening the cultivation of people with digital skills, Japan may fall into a subordinate position in the global competition for digital transformation.