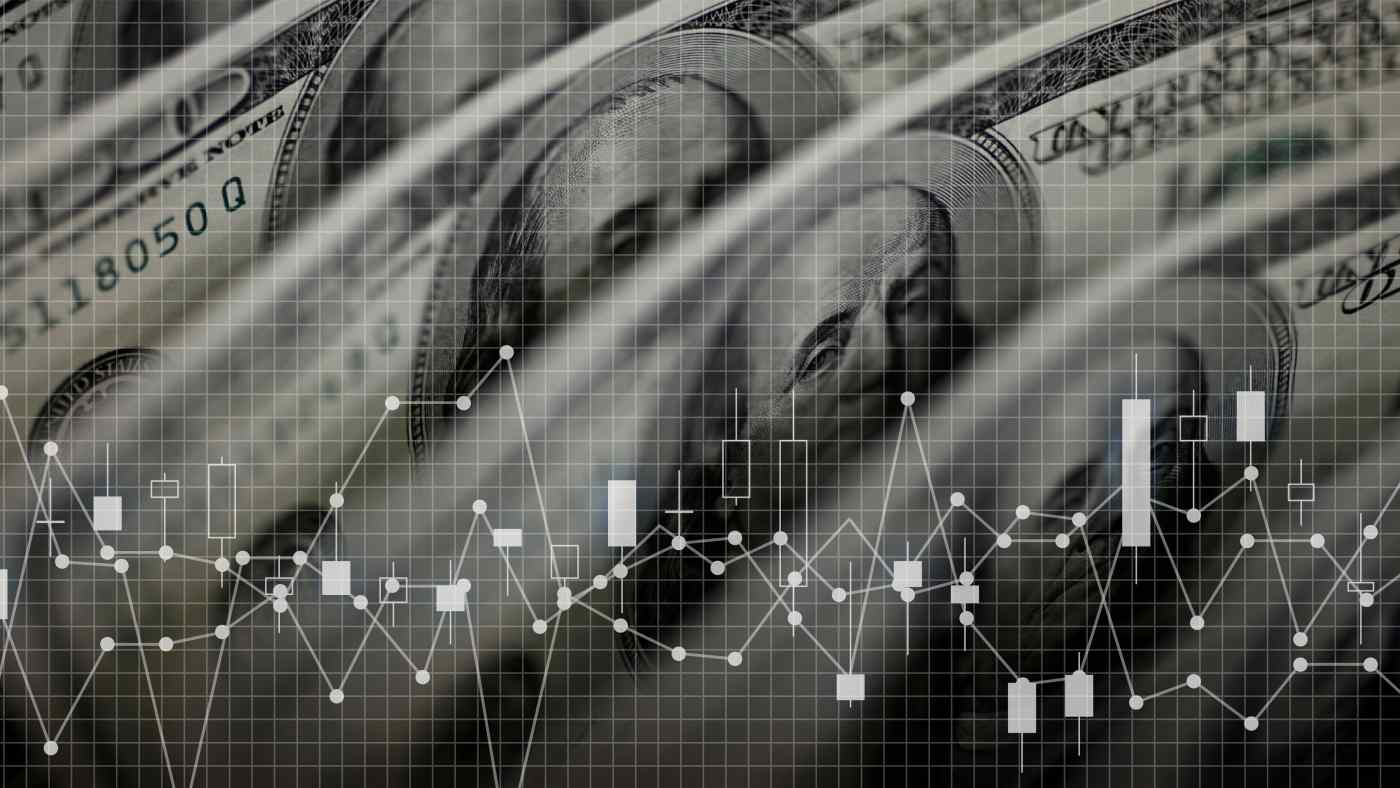 The dollar's theoretical value is on the decline due to the pandemic.
TAKERO MINAMI, KAZUYA MANABE and TATSUYA GOTO, Nikkei staff writersJanuary 31, 2021 11:00 JST | North America
CopyCopied

TOKYO/NEW YORK -- The depreciating dollar is becoming a focal point of the coronavirus-hit global economy.

Downward pressure on the dollar remains as the greenback's theoretical value is now about 9% below its actual price. This reflects the U.S. government's ballooning debt, partly due to trillions of dollars in stimulus spending.

If the greenback's depreciation leads to inflation in the U.S., this could trigger the Federal Reserve to mull ending its monetary easing policy, which would trigger a flight of money from stock markets.

On the other hand, if the U.S. currency were to appreciate, it could lead to a credit crunch in emerging economies saddled by huge amounts of dollar-denominated debt.

According to effective exchange rate indexes, which are prepared by the Bank for International Settlements to compare the values of currencies in 60 countries and regions, the dollar is at its lowest level in about three years. 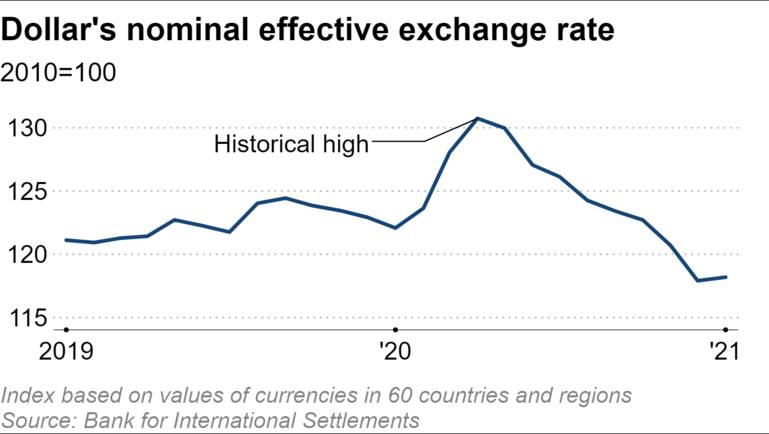 The euro in January hit a 33-month high. Japan's currency is about 5 yen stronger than it was a year ago, at about 104 to the dollar.

Emerging countries' currencies are also appreciating against the dollar. The Chinese yuan hit its highest level in two years and seven months at about 6.42 to the dollar. Many other Asian currencies, including the Malaysian ringgit, are also rising.

The dollar spiked last spring, when coronavirus infections began to spread around the world, as it was snapped up as a haven asset. The currency has since been on a downward path, though it remains overvalued when its theoretical value is considered.

The Nikkei equilibrium exchange rate, or Nikkei EER, is calculated by Nikkei Inc. and the Japan Center for Economic Research based on each country's economic fundamentals such as government debt and real interest rates.

According to the Nikkei EER, the dollar was worth 97 yen from July through September, when it actually took 106 yen to buy a dollar. The dollar's theoretical value -- calculated using data in regard to 60 other currencies, such as exchange rates as well as economic and fiscal conditions -- is as much as 9.4% below its actual value. 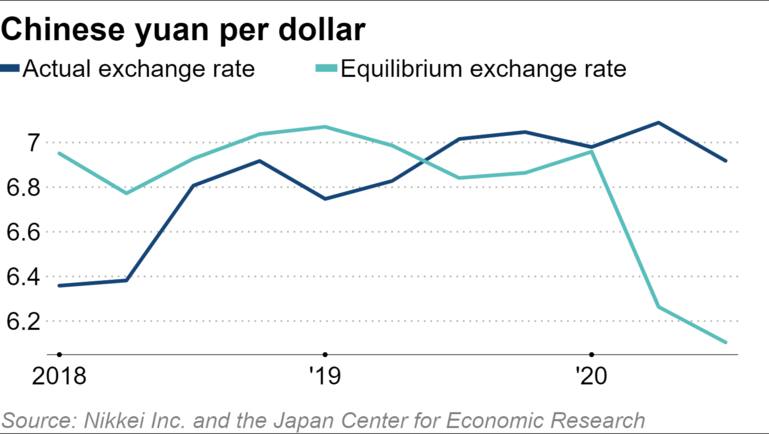 This is because U.S. government debt is ballooning at a faster pace than that of other countries. Downward pressure on the dollar began to grow after Washington rolled out massive fiscal measures, including corporate bailouts, cash handouts to households and increased unemployment benefits.

The U.S. money stock, the amount of money in the economy, in 2020 expanded by $3.7 trillion, or 25%, largely due to the huge amount of fiscal spending and the Federal Reserve's monetary easing steps. In Japan and Europe, money stocks grew at less than a 10% clip.

Downward pressure on the dollar remains. Joe Biden on Jan. 14, before he was inaugurated as president, proposed a $1.9 trillion stimulus package, though he faces hurdles in the Congress.

In her confirmation hearing, now Treasury Secretary Janet Yellen told the Senate, "The United States does not seek a weaker currency to gain competitive advantage." But its public spending is on a much larger scale than any other country.

With the U.S. debt swelling, the yield of 10-year U.S. Treasurys on Jan. 12 climbed to about 1.1%, its highest level in 10 months. The rise came as investors began speculating on whether inflation would hit the U.S. while vaccinations are taking place; expectations of economic recovery are also on the rise.

Stock prices have surged due to all the excess liquidity splashing around the world as central banks lean hard into monetary easing. But if inflation emerges, monetary tightening would be necessary; this would create a headwind for stocks.

The dollar can create financial market turmoil whether its value fluctuates up or down.

An excessively depreciating dollar would affect other countries' exports; this would create headwinds for the European and Japanese economies.

On the other hand, if the dollar were to reverse its direction and begin to appreciate, it would throw emerging economies into economic turmoil. In Turkey, three-fourths of major manufacturers' corporate debt is dollar-denominated. If the dollar were to rise in value, it would cost these manufacturers more lira to buy dollars and repay their lenders.

Ugur Gurses, an economist and former central bank official, said there is a risk of the greenback strengthening. According to the Institute of International Finance, the amount of money emerging countries need to repay foreign currency-denominated debts will peak in 2021.

In any case, the global economy faces a bumpy road ahead. In 2013, Ben Bernanke, then chairman of the Federal Reserve, referred to the winding down of quantitative easing. Bond yields rose and stock prices tumbled in a reaction that was referred to as a "taper tantrum."

Governments and central banks around the world now face what Bernanke did eight years ago. Once the pandemic has been beaten back, they will have to ever so gently maneuver toward the quantitative exits.