From Japan to the US, young people give up on finding jobs

COVID has been especially cruel to those just getting started TOKYO -- Millions of unemployed workers have given up on finding jobs amid an unrelenting pandemic.

Nikkei analyzed labor statistics from 10 countries, including Japan, the U.S. and U.K., and found that the total number of people in the combined workforce shrank by 6.6 million from July through September compared with the same quarter in 2019.

Young people and former part-timers account for most of the labor market exiles. Worse, the young people among this group might also miss out on opportunities to gain the kind of work skills and experiences that further careers.

During the first wave of infections, the pandemic led to an increase in unemployment. The U.S. unemployment rate, which was around 3% before the pandemic, spiked to 14.8% in April 2020. The number of unemployed also increased in Japan.

The pandemic especially hit the vulnerable in the job market. In the U.S. for the April-September period, there were 9.9% fewer people employed than a year earlier. But the figure for those under 24 years old was 19.1%. For people with no more than a high school diploma, the decrease was 16.8%. For those working only short hours, the drop-off was 15.2%. In Japan, the number of people whose annual income is below 1 million yen ($9,600) decreased by 1.09 million in the July-September quarter compared to a year earlier.

Nikkei looked at labor pools in Japan, the U.S, U.K., Canada, France, Italy, Spain, South Korea, South Africa and Thailand. For people in the labor market, their ranks declined by 15.35 million to 439.33 million in the April-June quarter, when some of the countries were battling their first wave of coronavirus infections. 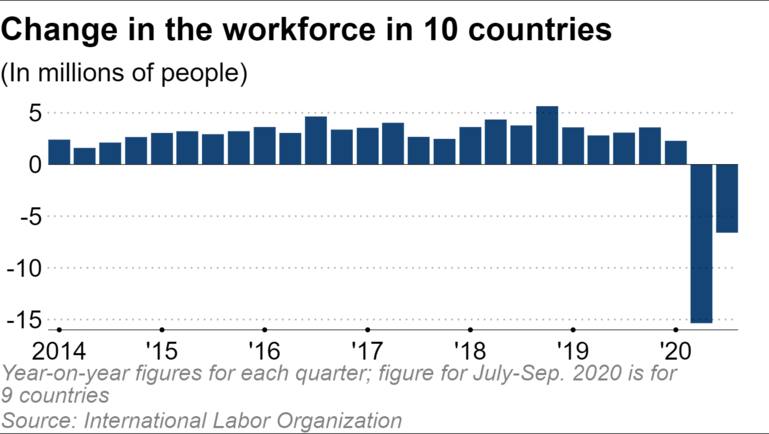 The decline was the steepest since January 2014, when comparable statistics began being kept. In the July 2020 quarter, another 6.6 million people had left the labor market compared to a year earlier.

As the coronavirus began to rage during the October-December quarter, some countries went into lockdown, making it impossible in many cases to find jobs.

Due to the way labor statistics are collected, people who do not search for jobs are invisible. Only those who both want to work and are searching for employment are counted as jobless. Thus, retirees are not considered to be jobless.

In the U.S., when these people who gave up searching for jobs are counted as unemployed, the de facto unemployment rate in December becomes 9.8% -- 3.1 percentage points higher than the official number. 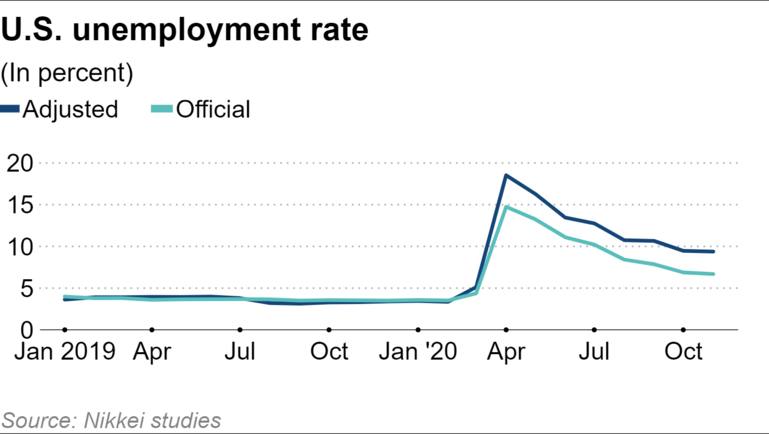 Currently, a third wave of infections is sweeping the globe. Japan on Thursday declared a state of emergency in Tokyo and its surrounding prefectures. As a V-shaped jobs recovery looks unlikely, demand for government support to alter the dynamic is likely to increase.

According to Hisashi Yamada, vice president of the Japan Research Institute, "Governments need to adopt a policy that makes people returning to the job market work in industries where there is a shortage of labor, such as in nursing care."