Central banks are on pace to buy more gold this year than last year, when they bought the most since the U.S. ended dollar convertibility in 1971.
RYUTA MINAMIHATA and KAZUYA MANABE, Nikkei staff writersNovember 3, 2019 02:04 JST | North America
CopyCopied

TOKYO -- Gold prices are surging, with central banks and gold-backed exchange-traded funds buying up the precious metal amid uncertainty stemming from the prolonged U.S.-China trade war and negative interest rates around the world.

Gold futures in New York are trending around $1,500 per troy ounce -- approximately $200, or 15%, above the theoretical value of $1,300. The difference is the largest since 2011, when gold prices were buoyed by the downgrading of U.S. sovereign debt.

Central banks are pouring money into gold. World Gold Council figures show their first-half purchases this year putting them on pace to buy more this year than last year, which marked the highest level since the 1971 end of dollar convertibility to the metal. Russia, China and India are snapping it up as they rebalance foreign exchange reserves now heavily tilted toward U.S. government securities. Such countries as Poland are embracing the precious metal as well.

Nearly a third, or 32%, of central bank officials say they intend to buy gold over the next year, according to a survey by American asset management company Invesco. This marks a role reversal for central banks, which had been net sellers of gold through 2009. As they shift away from U.S. sovereign debt, central banks are turning to gold by process of elimination because interest rates in Europe and elsewhere have fallen into negative territory.

Gold-backed ETFs are also playing a big role. Pension funds, hedge funds and other institutional investors have been fueling an inflow into the gold market via these ETFs since their 2003 debut.

The weight of gold held by ETFs reached an all-time high at the end of September, and the value of their holdings is also approaching a record. The SPDR gold ETF, run by State Street Global Advisors, ranks ninth globally as a holder of gold in value terms, behind Switzerland, and is the world's largest such fund. Long-term investors are strategically building up allocations to ETFs, according to State Street gold strategist Robin Tsui.

Combined purchases by central banks and ETFs reached about 30 trillion yen ($278 billion) over the past 10 years. 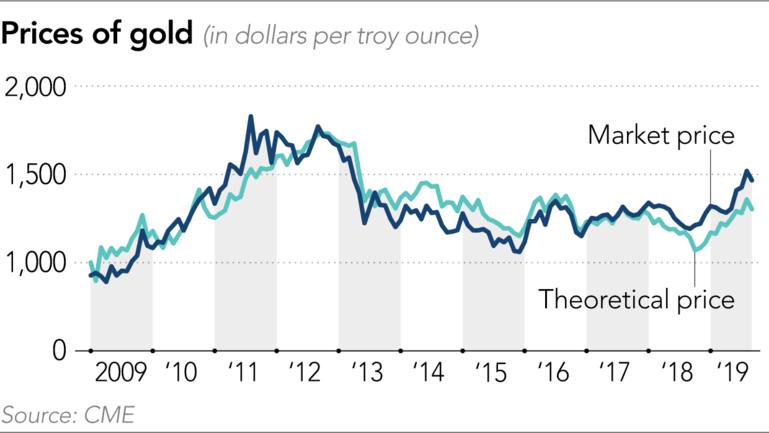 Gold prices are highly correlated with the rise in the Economic Policy Uncertainty Index, a barometer published by a group of academic researchers. It shows that global risks are heightening to unprecedented levels, Tsui said, as the continuing trade war weighs on investor sentiment.

Roughly $15 trillion in bonds paid negative yields as of September, according to the Mizuho Research Institute. This has masked gold's lack of interest payments and burnished its appeal as a safe asset. But gold's rise has to do with fundamentals as much as the growing presence of central banks and ETFs -- which keep snapping the metal up despite its overheating.

The theoretical value of gold was obtained by Nikkei Inc. using the U.S. Dollar Index published by the Intercontinental Exchange, a measure of the greenback's relative strength against other major currencies, and past data on yields of inflation-linked U.S. government bonds -- an indicator of actual American interest rates.

The computation took into account such tendencies as gold, a real asset, moving opposite to the benchmark currency of the dollar. It also took into consideration how gold, which does not produce a yield, tends to fall when yields on U.S. government bonds rise, and vice versa. 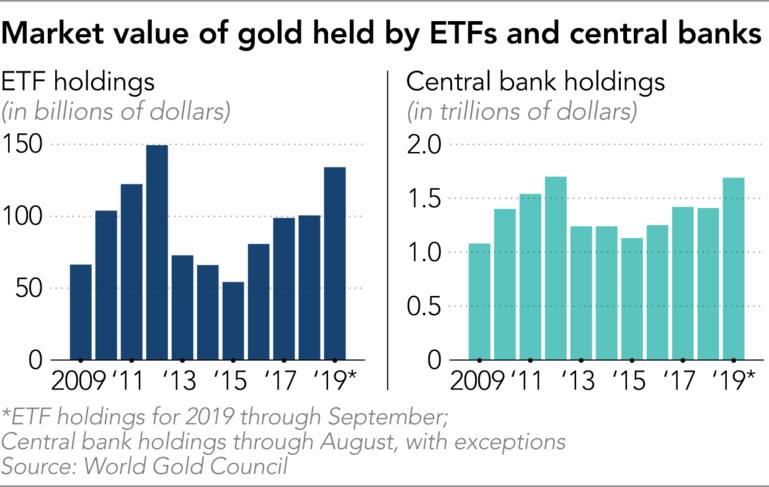