Japan and US savings surge, with vaccines set to trigger spending

With 'herd immunity' in sight hopes rise that economies will reopen The correlation between movement restrictions and consumption suggests that consumption is likely to recover once the restrictions are eased -- a swift vaccination program will significantly impact the economic recovery.

Nikkei studied the correlation between the stringency index calculated by Oxford University -- an index that measures the strictness of mobility restrictions -- and personal consumption in 37 member countries of the Organization for Economic Cooperation and Development (OECD) and found out that the more the mobility restrictions are eased, the more consumption bounces back.

Between July and September 2020, personal consumption increased 11% quarter-on-quarter on average in the member countries of OECD as their economies reopened. The U.K. saw a 19% increase. Consumption was sluggish globally between October and December 2020 due to another wave of infections, but the vaccines are expected to ease restrictions from January to March 2021 onward. 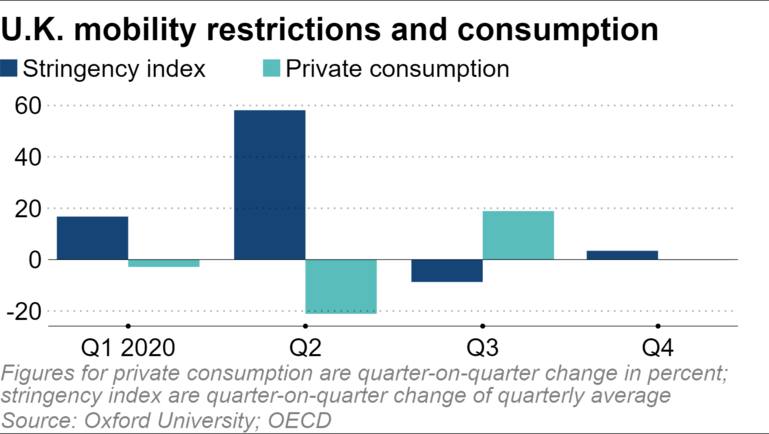 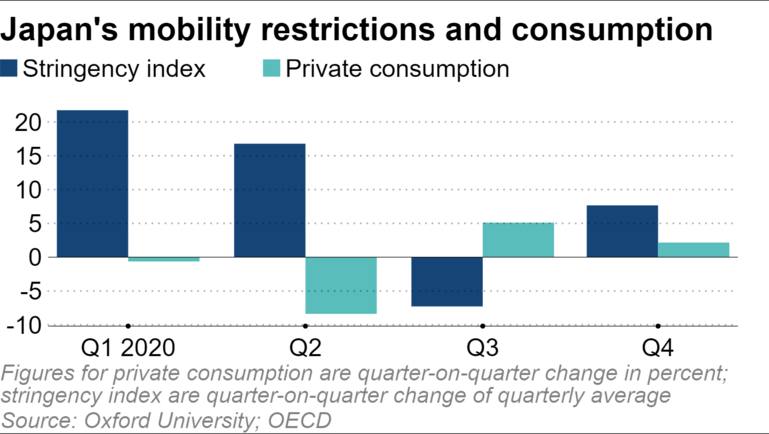 The rebound of consumption will be supported by a significant increase in household savings. The savings rates -- the percentage of money left for savings from disposable income -- in Japan, the U.S., Europe and other major economies, rose sharply to historical levels due to mobility restrictions and stimulus measures. The U.S. personal savings rate surged to about 30% between April and June 2020, more than double the average recorded between 2007 and 2019. The policy to hand out $1,400 per person is likely to have further increased household savings. 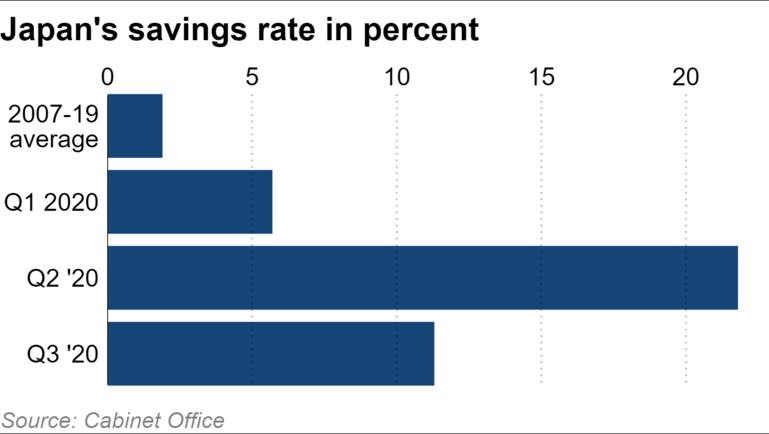 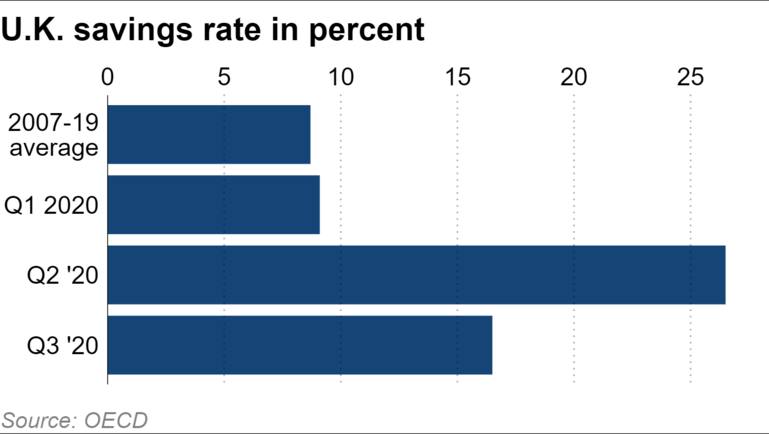 In Europe, too, expectations are high regarding the easing of movement restrictions, which is set to unleash a huge amount of coiled-up energy as people will be able to travel about again. Andrew Haldane, chief economist at the Bank of England, wrote in the Daily Mail: "A decisive corner is about to be turned for the economy too, with enormous amounts of pent-up financial energy waiting to be released, like a coiled spring."

According to travel data company Adara, the number of bookings for airplane tickets for sightseeing trips more than three months in advance is increasing in Europe.

In countries that were able to deter infections even before the start of vaccination programs, consumption has begun to recover. According to Singapore restaurant booking site Chope, the number of reservations in January increased 37% year-on-year.

"Curbs on leisure travel that remain in place for now continue to drive consumers [...] and dining is one that can not only evoke travel, but continues to be a lifeline in remaining connected through these challenging times," said Jean Wee, general manager of Chope. One high-end sushi restaurant in the city-state said they were already booked up for reservations until mid-September. 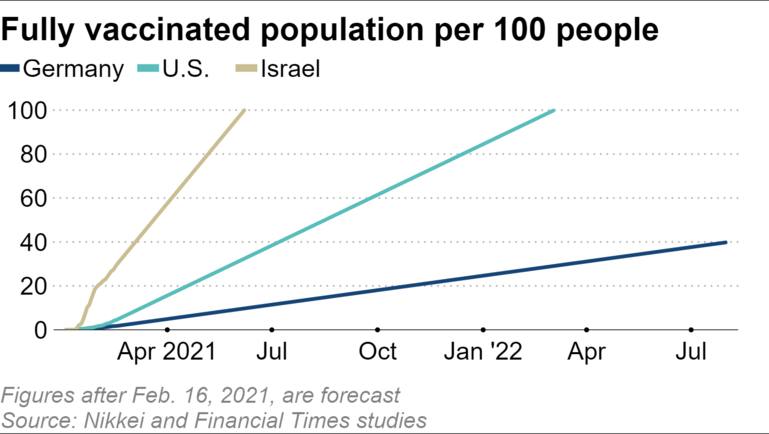 In many countries, the pace of vaccination will have a significant impact on the economy. In Israel, where vaccination rollout has been the fastest in the world, 30% of the population has already received two doses. If the current pace continues, more than 70% of the population will be vaccinated, and hopefully immune, by the spring of 2021. The closer any country gets to so-called herd immunity, the easier it will be to lift lockdowns.

In the U.S., President Joe Biden aims to have 100 million vaccine doses administered by the end of his first 100 days in office; currently, the pace exceeds that goal -- the number of jabs is currently at about 1.7 million per day.

On the other hand, in Japan, where the vaccine rollout has been slow, and in the European Union, which is short of vaccines, reopening economies will not be easy.

With pent-up demand building, in the U.S., economists forecast that consumer spending will rise by more than 10%, year-on-year, starting in the April to June quarter. Inflation worries are also growing, with analysts anticipating a spending spree. Central banks around the world will face tough choices if the markets bet on tighter monetary policies before the global economy recovers.