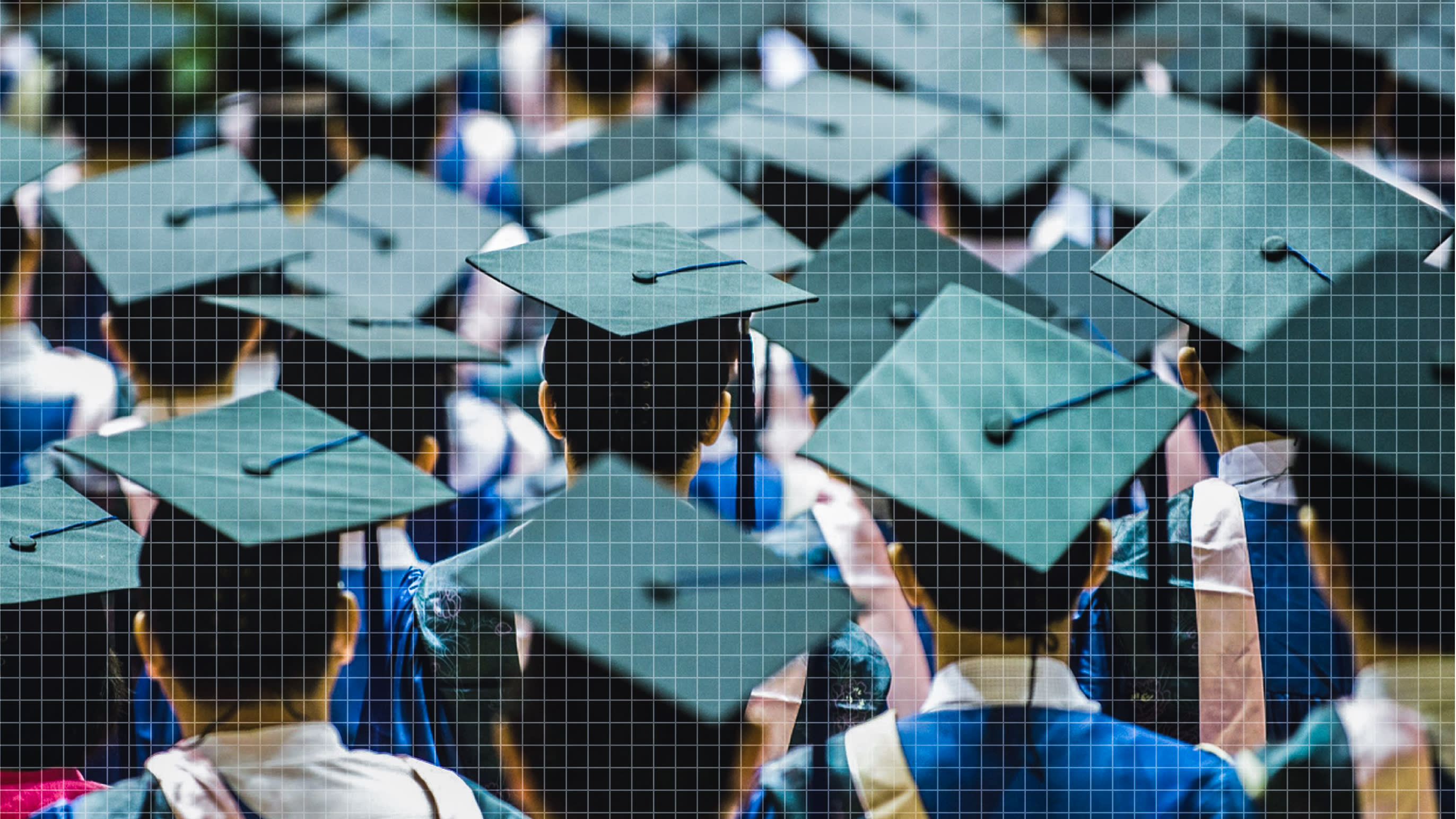 Possession of a master's degree or doctorate is the basic requirement for employment as an engineer in cutting-edge fields at Google and other big information technology groups in the US.

TOKYO -- The world is entering an era of the "academic career-based society", with the requirement for advanced knowledge and skills in the management and digital fields fueling demand for master's and doctor's degrees.

However, while the number of students acquiring doctoral degrees globally has increased sharply over the past decade, in Japan there has been a drop of more than 10%. Indeed, the country risks falling behind in terms of global skills competitiveness if it sticks to its conventional hiring practices, which place more weight on applicants' character than their expertise.

"Foreign students account for 55% of those studying for a master's degree in economics, as the enrollment quota cannot be filled with Japanese students alone," said Yasutora Watanabe, professor of economics at the University of Tokyo.

With an awareness of the crisis facing the country, Watanabe stressed the "social need" for postgraduate studies on economics, citing his experience heading the economics section at the Japan unit of Amazon.com.

But Japanese students as a whole are not exactly keen to enter graduate study programs. 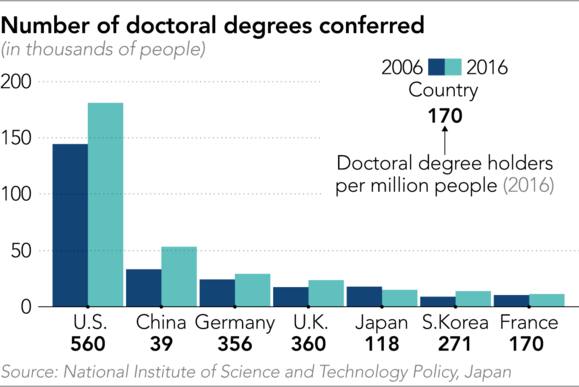 According to the National Institute of Science and Technology Policy, the number of students who obtained doctoral degrees in the decade through fiscal 2016 increased more than 20% in the U.S. and China. A similar trend was observed for master's degrees, with higher levels of education necessary to secure senior posts at companies.

Possession of a master's degree or doctorate is the basic requirement for employment as an engineer in cutting-edge fields at Google and other information big technology groups in the U.S.

Until the Trump administration tightened visa requirements, thousands of Chinese study for doctoral degrees in the U.S. every year. When they return home, they are known as "sea turtles" -- in Chinese a homonym for "returnee" -- and are valued in society and the workplace.

The number of people receiving a doctoral degree in 2016 increased to some 53,000 in China, up 60% from 2006. Although the number per 1 million people is still relatively low, there are already more than three times more doctorate holders in China than in Japan. South Korea is catching up with Japan, with its number increasing 56% over the decade to a little less than 14,000 doctorate holders.

In Japan, the number of people receiving a doctoral degree came to 15,000 in fiscal 2016, down 16% from 10 years earlier. The declining birthrate cannot explain the decrease as the number of students enrolled on four-year undergraduate courses consistently increased during the period. 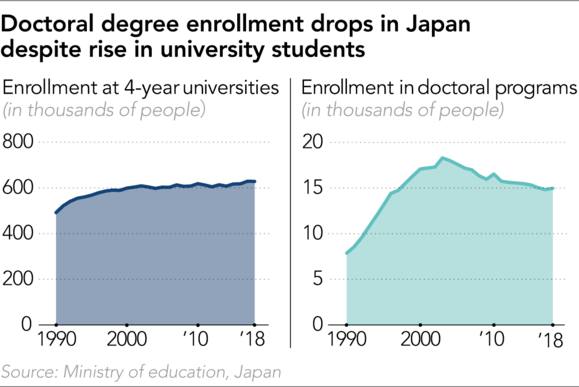 The decrease reflects Japanese students' reluctance to advance to higher-level courses of study. In short, Japan is becoming a society with low education levels compared to other developed countries.

While the finding partly reflects issues such as unstable pay for researchers at universities in Japan, the corporate sector is also blamed for its failure to make use of people with the highest levels of education.

One example comes from a woman who used to study artificial intelligence in a doctoral program and now works in infrastructure marketing and development at a major Japanese electric and electronic equipment maker. During her recruitment interview, she was not asked about her expertise but told that joining the company should be a priority over the acquisition of her doctoral degree. She eventually dropped out of her degree program.

The Japan Business Federation, or Keidanren, which annually surveys its member companies about the emphases they place when they hire new workers, has found that "communication skills" and other factors related to a candidate's personality are always seen as more important than their expertise.

The lack of appreciation of workers' expertise can also be seen in a comparison of average annual income earned by those aged about 30.

Undergraduate degree holders employed at Japanese companies earn an average of 4.18 million yen ($38,472) per year, while income earned by holders of master's and doctor's decrees is 1.25 times higher at 5.24 million yen. 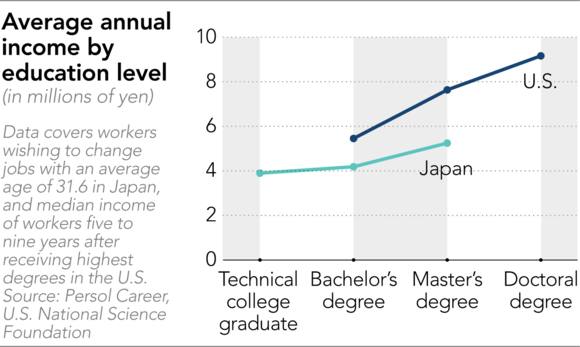 In the U.S., holders of master's and doctor's degrees earn 7.63 million and 9.15 million yen, respectively 1.4 and 1.68 times more than those in the country who hold undergraduate degrees.

It is standard around the world for people with higher levels of education to receive better pay.

"The Japanese market is isolated from the global standard of evaluating human resources," said Eiji Oguma, professor of social science at Keio University.

As a testament to the poor treatment of employees with doctoral degrees at Japanese companies, they continue to be hired away by foreign companies with offers of twice the rate of pay.

One man who had studied chemical materials at a Japanese university was suddenly poached last year from his Japanese employer by a South Korean company offering to double his pay. He has been somewhat surprised to note that "all senior workers around me at the new employer are doctoral degree holders."

As holders of doctoral degrees in Japan are not earning competitively in the corporate arena, 75% of them are attached to universities and other research institutions.

The number of doctoral degree recipients increased in Japan following encouragement from the government in the 1990s. But they were not accepted into the private sector, resulting in a postdoctoral problem of unstable employment. This problem was partly attributable to universities that had failed to turn out the sort of people that companies wanted to employ, said Hiroshi Nagano, senior researcher at the Japan Science and Technology Agency.

The ability of a nation to provide quality and relevant education and then harness its human resources can seriously affect its competitiveness. In the U.S., 40% of doctoral degree holders are employed by companies and serve as the driving force of innovation.

It is essential for Japan to promote reforms in its hiring practices and education.