The American and European workforces have higher percentages of jobs whose holders can do their assignments on a laptop no matter where they are. (Source photo by Kyodo and Getty Images)
SHINICHI HASHIMOTO and MOTOKAZU MATSUI, Nikkei staff writersJuly 5, 2020 11:55 JST | Japan
CopyCopied

TOKYO -- Japan trails the U.S. and Europe when it comes to employees ditching the office to work from home, and the gap is likely to widen now that Japan has lifted its COVID-19 emergency and workers who did set up shop in their dining rooms are heading back to their cubicles.

Nikkei examined data Google collected from its map app that shows how commutes changed as the pandemic took hold.

When the Japanese government declared its state of emergency in April, there were already 21.9% fewer people commuting to their offices than before the outbreak. But in June, after the decree had been lifted, the number of people no longer commuting was 12.9% less than pre-outbreak levels.

In the U.K. in June the number of commuters was down 44% from February. The U.S., France, and Germany had 20% fewer commuters in June than in February.

Nestle, the world's largest food company, used to have roughly 4,300 employees fill its offices in Switzerland, where it is headquartered. Today most of these former office workers are doing their jobs at home. What they used to do in person they are now doing by videoconference.

PSA, the French automaking group, in May expanded the number of employees allowed to work from home to 40,000 globally, up from 18,000. 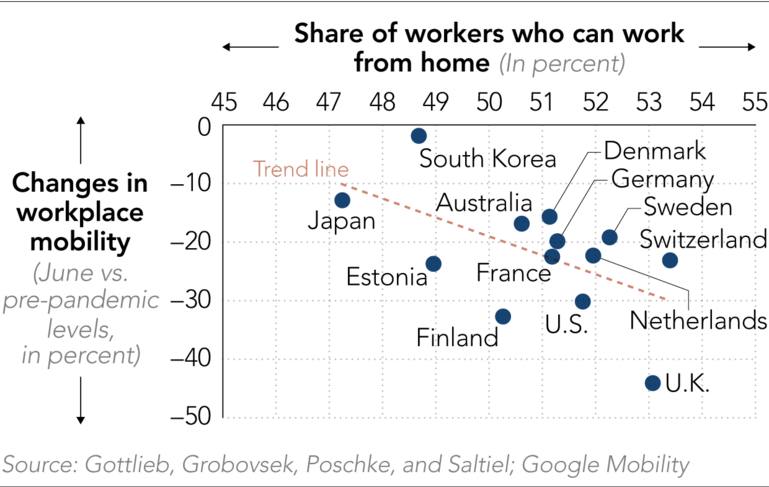 In Japan, companies such as Hitachi and Fujitsu are encouraging their employees to work from home, but they are the exceptions.

One reason Japan lags much of the rest of the developed world in this regard is its low share of specialized occupations.

The estimated share of specialized occupations, including engineers, in Japan's workforce in 2018 was 17%, lower than that of the U.S., 36%; the U.K., 37%; and Germany, 40%, according to the Japan Institute for Labor Policy and Training.

These specialized occupations include IT engineers, legal experts and accounting specialists. Workers with such knowledge-intensive jobs have an easy time moving their work stations from the office to the living room. In many cases, these stations consist of a laptop and a company smartphone.

It is difficult for these workers to move entire offices into their homes.

Another difference is that Japan's economy and society lag when it comes to digitization. This can be witnessed at municipal offices, where few administrative procedures can be handled online.

Expanding the share of the workforce that can work from home would affect productivity. According to a survey in 2019 by the International Workplace Group, an office provider, 85% of the 15,000 companies surveyed had answered that working at home leads to improved productivity. 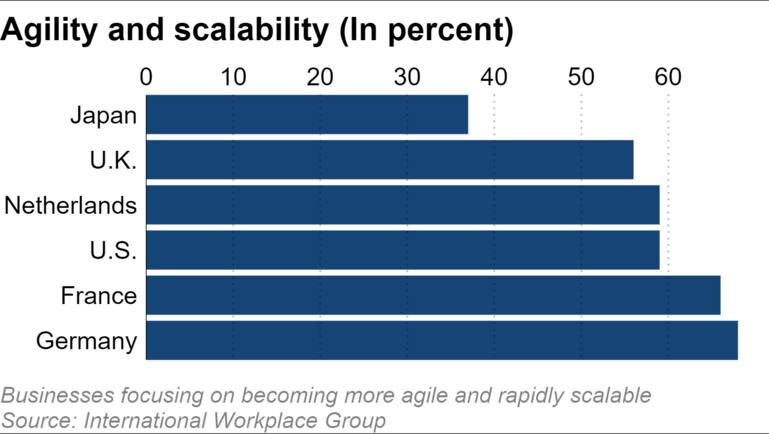 On the other hand, data from the Organization for Economic Co-operation and Development in 2018 shows gross domestic product per hours worked in Japan was 40% lower than in the U.S.

While the world faces an employment crisis because of the pandemic, more people are starting to work at home around the world. The Online Labor Index, calculated by Oxford University using data on job offers, shows how many people can work from home.

With May 2016 as a baseline of 100, May 2020 comes in at 170. This is because the number of job offers in specialized sectors such as software development, legal affairs and accounting is increasing. 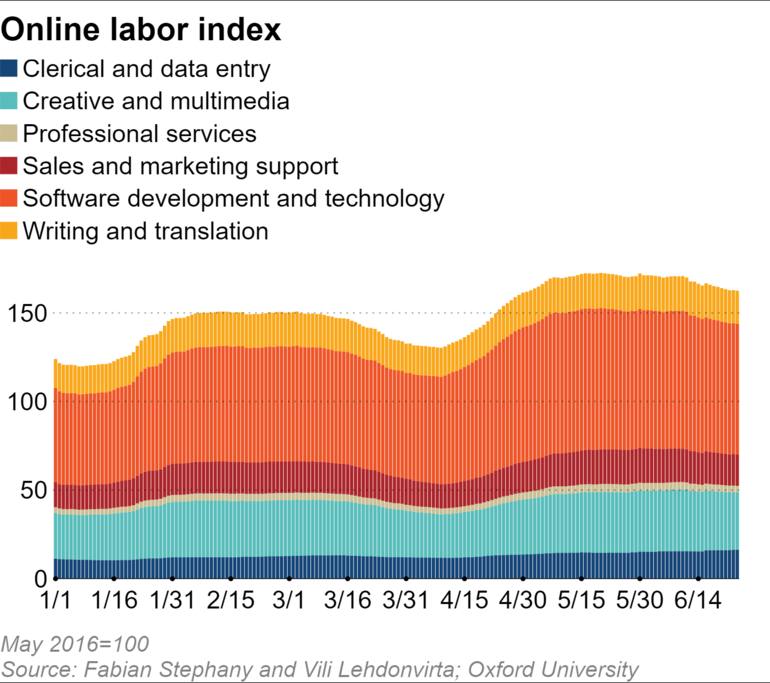 If Japan would like to increase the number of job opportunities it offers, it might want to expand its specialized occupation workforce -- that pool of workers who can pitch in from anywhere.