TOKYO -- Increasing numbers of young people are switching jobs in midcareer in Japan, reflecting how the pursuit of jobs in growth sectors is growing more active amid tough employment environments caused by the COVID-19 pandemic.

While new recruits may be unable to accumulate enough experience if they choose to leave quickly, the employer suffers greatly from the loss of workers after putting them through training programs. Nevertheless, the shift of human capital to growth sectors is indispensable for enhancing the productivity of society as a whole.

Young job hoppers "place a premium on what skills they can acquire for their future through midcareer job switches," said Shotaro Kawabata, senior managing director at the employment agency Uzuz.

On the other hand, employers need personnel familiar with new business sectors. Fast Retailing offers annual pay of up to 20 million yen ($180,144) to job switchers well versed in data analysis.

An increase in moves to differentiate compensation will encourage not only young people but also workers of higher ages to switch jobs in midcareer. The liquidity of the labor market may increase in Japan, where young people's job mobility is less than in other developed countries.

A 26-year-old Tokyoite changed to an IT security company in May after four years of work at a travel agency he had joined straight out of school. Worried about his future because of a plunge in the volume of work at the agency, he decided to switch. "I want to change jobs again to step up my career," he said. 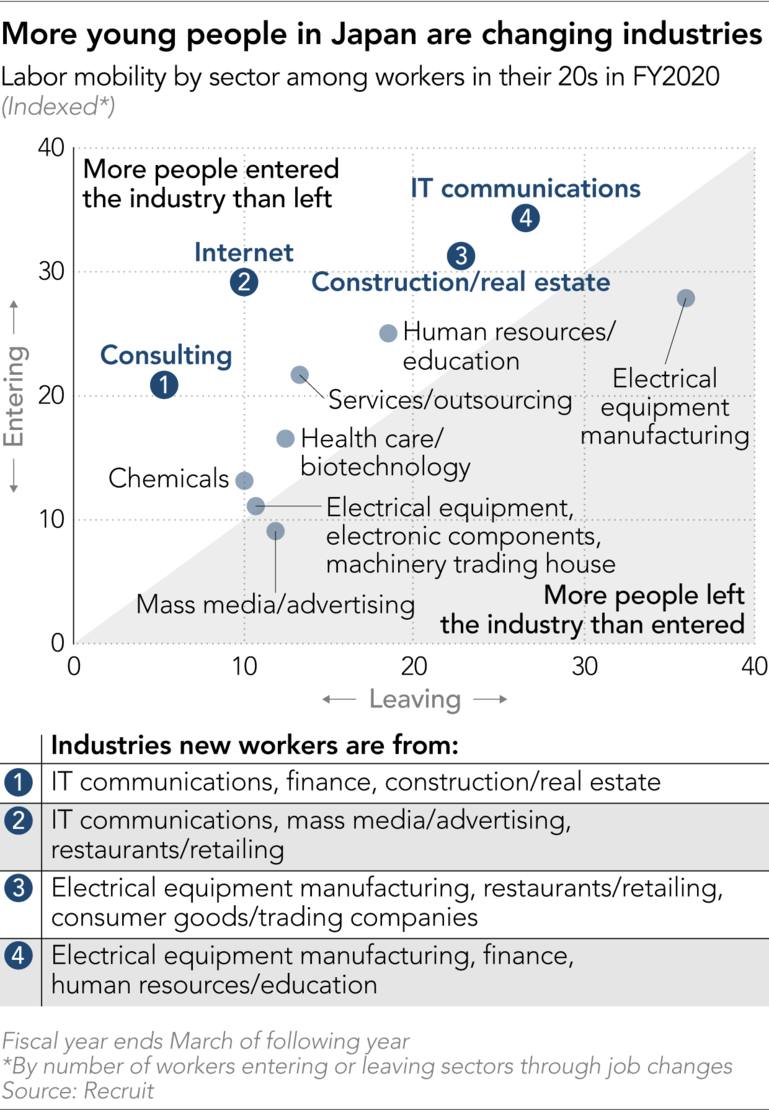 The midcareer job market in Japan has come to a standstill because of the pandemic. In 2020, 3.19 million people changed jobs, down about 10% from the previous year, according to a survey of the labor force by the Ministry of Internal Affairs and Communications. While unemployment is being held in check because of the government's employment adjustment subsidy and other programs, labor mobility to growth sectors in need of manpower is also slowing.

However, the state of affairs is different when it comes to young people. Some 150,000 of them quit within three years after starting their first job. Among people who graduated from college in 2017, 32.8% did so, up 0.8 percentage point from the class of 2016 and the highest level in the past decade. Such mobility is increasing because 40% of companies are actively hiring "second new graduates," those who graduated within the last three years or so.

An analysis of young people's use of the Recruit Agent personnel placement service, operated by the human resources company Recruit, found that in 2020 the number of 20- to 24-year-old workers who landed new jobs in midcareer was 3.5 times larger than the average from 2009 to 2013, and double the average of all generations. In addition, 52% of them moved into different business sectors, up 11 points over 10 years earlier.

IT communication is a popular destination of job hoppers from electrical equipment manufacturers, financial institutions and other companies. Construction and real estate companies, benefiting from strong demand for housing thanks to an increase in remote work, similarly are attracting personnel from electrical equipment manufacturers, restaurant operators and trading houses.

Such a change may bring a new wind to Japan's rigid labor market.

The ratio of workers with more than 10 years of employment is an index for comparing labor liquidity. Excluding workers such as young employees who were hired fresh out of school and midcareer job switchers with a short duration of service, the ratio is high if there are many middle-age and older workers under career-long employment. 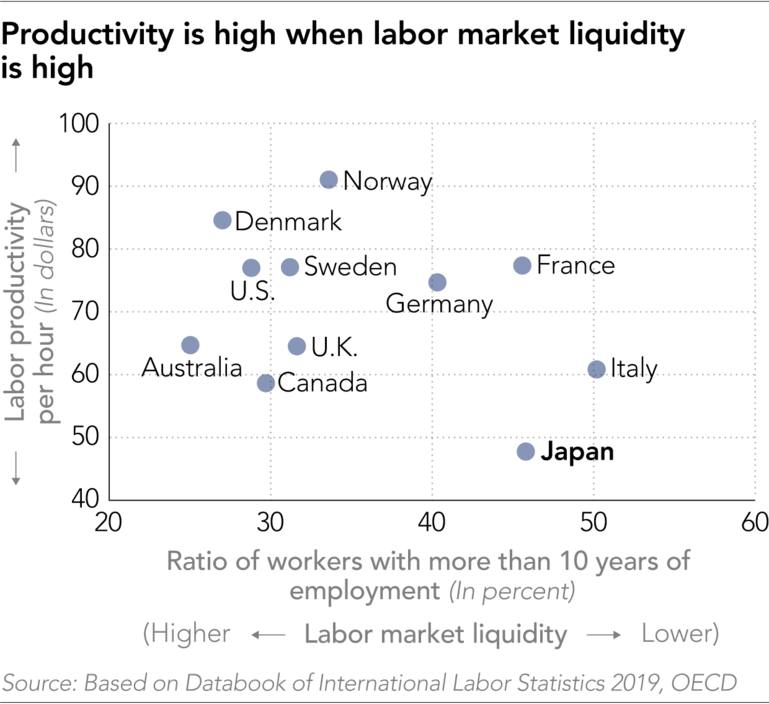 The ratio was 45.8% in Japan in 2017, the highest among major developed countries and a rise of 2.1 points from five years earlier. In other words, many workers in Japan continue to stick with their company. The trend is especially strong among employees of big companies.

In countries such as Norway, Denmark and Sweden, the ratio stands at around 30% because, as Hisashi Yamada, vice chairman of Japan Research Institute, put it, "the transfer of labor from fields with low productivity to those with high productivity is active there." Northern European countries provide ample support for job retraining and reemployment while maintaining moderate dismissal regulations.

Changes are occurring even in countries with strict labor regulations. France is advancing policies such as capping penalties that employers pay when they dismiss employees.

Experts in Europe point out that an expansion in the liquidity of labor, although contributing to an improvement in productivity, is also resulting in decreased employment of full-time workers and an increase in nonregular employment. At stake for growth in the post-COVID era is whether a high economic metabolism can be promoted while preventing social disparities from growing.