OSAKA/SAPPORO -- A little past 9 a.m. on Monday, a Finnair flight from Helsinki carrying 194 passengers landed at New Chitose Airport in Hokkaido. It was the airline's inaugural flight from the Finnish capital to Hokkaido's principal airport.

Among the passengers was a 35-year-old programmer who was making his 17th visit to Japan, but his first to Hokkaido, the northernmost of Japan's four main islands. He said he had long been looking forward to visiting the place, where a friend had once studied.

On the same day, Australia's Qantas Airways launched its new direct seasonal flights between Sydney and New Chitose, to coincide with the peak ski season.

Hokkaido, which also boasts hot springs, farms, lavender fields and stargazing sites, has established itself as an international tourist destination. From Thailand, some 140,000 people landed in Hokkaido last year, a 220-fold increase from a decade ago. 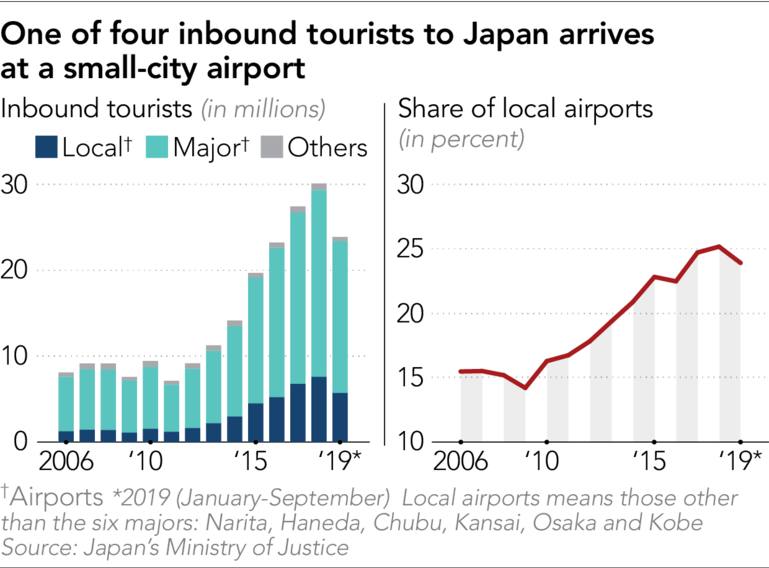 According to data analyzed by Nikkei, based on airport operation data compiled by the Ministry of Land, Infrastructure, Transport and Tourism and immigration control statistics provided by the Justice Ministry, one in four visitors to Japan came through 57 of the country's lesser-used gateways in 2018.

The latter figure represents much faster growth than what all of Japan's airports experienced over the same decade: At 29.32 million, the country's total foreign visitor arrivals in 2018 were up 250% from 2008.

By another measure, Japan's small-city airports welcomed 1,132 regular international flights per week in the winter season of 2018, up 80% from fiscal 2014.

There are two sub-trends here. Most of these flights are arriving from other parts of East Asia, and many are landing in western Japan.

South Koreans, Taiwanese, Chinese and Hong Kongers made up 90% of small airports' foreign passenger traffic in 2018, while South Korea alone accounted for more than 40%.

This hints at a task still ahead for outlying prefectures with international airports -- luring aircraft from further afield. In 2018, Fukuoka was the nonmajor airport that handled the largest number of foreign tourists entering Japan, 2.41 million. Of the 57 airports, 17 handled over 50,000 international travelers during the year. Of these, 11 are in western Japan.

Tourists who use smaller airports are mostly repeat visitors who are looking for new experiences away from the Tokyo-Kyoto Golden Route.

Yamagata Airport, in northern Yamagata Prefecture, experienced the sharpest upswing in inbound passenger traffic in the past 10 or so years. In 2018, it allowed 6,550 travelers into the country, up from two in 2008.

Many of these tourists came on chartered flights from Taiwan. In the four years through fiscal 2018, these flights surged more than ninefold to 123. On the westernmost main island of Kyushu, foreigners entering Japan through Kyushu-Saga International Airport soared more than seventyfold. The airport served 12 regular international flights per week in the winter of 2018 and 177 chartered international flights in fiscal 2018. In this regard, it ranked fourth among small-city airports.

The Saga prefectural government has also played a role by lowering landing fees and offering other financial carrots. It expects annual economic benefits of close to $100 million.

But it has hit a speed bump. Many flights between Japan and South Korea have been suspended after South Koreans began boycotting Japan over a diplomatic dispute between the nations that reached a boiling point in July. In January-September 2019, tourists from China and other countries increased from a year earlier, but South Koreans who flew to Japan declined across the board in September.

Saga's prefectural government has been scurrying to make up for the drop-off of South Korean visitors and has secured new regular flight service from Xi'an, in China's Shaanxi Province.

He said the next job for prefectural governments with airports is to attract flights from more far-flung cities by promoting outbound tourism.

This year, the Rugby World Cup, which took place at 12 venues in Japan, reached its potential due to the diversification of foreign visitors. In September, visitors from the 17 participating countries, of which England and three others are in the U.K., increased 40.6% from the previous year at regional airports, exceeding the overall increase. The Tokyo 2020 Olympic and Paralympic Games are also expected to have a knock-on effect on local economies.

Additional reporting by Haruki Kitagawa in Nagano and Sho Asayama in Yamagata. 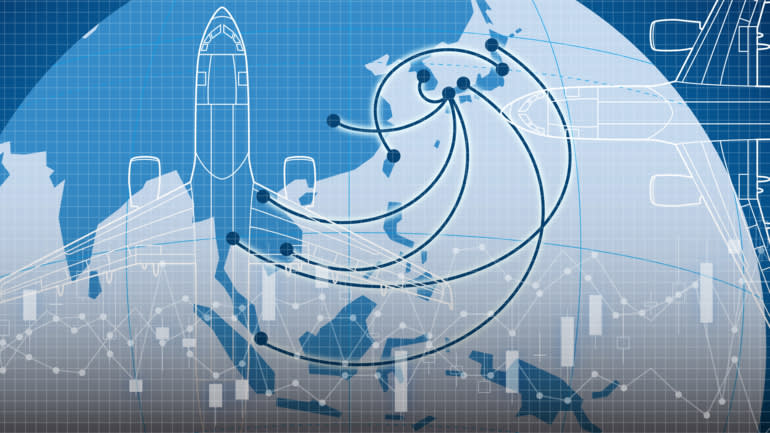 Millions of tourists are using out-of-the-way airports as their gateways to Japan -- and as jumping-off points to new experiences.