Japan has a total of around 18,000 EV charging stations -- about 60% of the number of gas stations -- but they are relatively scarce in rural areas.
RYOTARO YAMADA and KOSEI FUKAO, Nikkei staff writersMarch 28, 2021 12:00 JST | Japan
CopyCopied

TOKYO/FRANKFURT -- The number of electric vehicle charging stations in Japan is lagging behind many other countries, with less than half that of major European countries.

A familiar scenario played out in early March as a line of EVs heading to Tokyo lined up at a lone quick charger in the Hasuda Service Area on the Tohoku Expressway. One person driving a Honda said, "I've been waiting 15 minutes to charge. Things would be a lot faster if there was more than one charger."

The convenience of EVs can be measured in part by accessibility to charging stations. According to Zenrin, as of March 2020, there were 18,270 chargers open to the public. This is only 60% the number of gas stations, which total 29,600 nationwide. Moreover, there are only 160 hydrogen stations in Japan for fuel cell vehicles.

According to charging station provider e-Mobility Power, there are 18 places in Japan where no charging facilities exist within a 70km stretch of highway. On major roads, there are 60 places with no chargers within a 40km stretch. EVs generally have a shorter range than internal combustion engine vehicles. Ultimately, a lack of charging stations means fewer consumers willing to go electric. In a survey in 2020 by Deloitte, lack of charging infrastructure was the most common concern for Japanese consumers when buying EVs, accounting for 29% of the respondents. 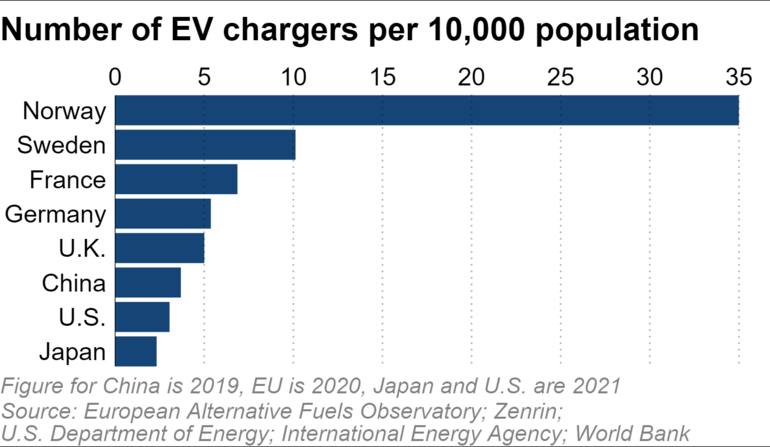 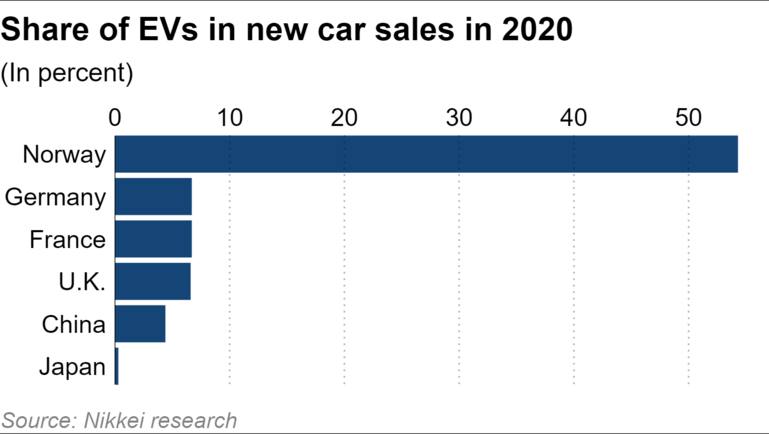 Norway, which gets most of its electricity from hydropower, has been promoting the shift to EVs with tax exemptions and free charging at public parking lots. Charger operation has been profitable since around 2017, and the private sector has started to invest in the new business.

But Japan still depends on subsidies to expand the infrastructure. Of the 30,000 chargers in Japan, about 20,000 were installed between 2013 and 2016, thanks to government subsidies. But the Ministry of Economy, Trade and Industry has seen its charger budget decline. As a result, according to Zenrin, the number of chargers as of February this year was 800 fewer than in March 2020.

And the fact that existing chargers in Japan are aging compounds the problem.

In June 2020, the city of Yonago in Tottori Prefecture removed a quick charger that had been installed at a tourist center in 2011. It broke down in 2019 and the city decided not to repair it because it would have cost nearly one million yen ($9,100).

According to Toko Takaoka, a charger manufacturer, the life span of a quick charger is eight years. But in highly trafficked areas, this can drop to less than three years. Many in Japan will need to be replaced in fiscal 2022, but repairs or replacements will be costly.

In Japan, the administration of Prime Minister Yoshihide Suga is considering revising its 2030 goal upward to slash carbon emissions. But to achieve the goal, the country will need to use more renewable energy and invest heavily in charging stations.