Big companies are having staff work from home, stagger commutes and cut back on after-work revelry, moves which have lessened crowds but hammered restaurants and other businesses.
KENJI ASADA, KOHEI FUJIMURA and KAZUHIRO KIDA, Nikkei staff writersMarch 10, 2020 12:54 JST | Japan
CopyCopied

TOKYO -- The new coronavirus is emptying city centers in Japan, with nighttime populations shrinking by half and office districts seeing 20% fewer people during the day, according to a Nikkei analysis.

Businesses had already been asked to change work routines before the 2020 Olympic Games in Tokyo this summer. Now, the spread of the new coronavirus has prompted companies to speed work reforms.

On Wednesday evening at around 9:00 pm, there were only 15 people dining at a 170-seat restaurant in central Tokyo's Ginza shopping and entertainment district. "Customer traffic has really decreased over the past several weeks," a staff member said. "We cannot figure out how many employees we need because we don't know the turnout from day to day."

Wary companies are a big reason behind the decline, cutting back on client entertainment and asking employees to refrain from after-work revelry. "We are banned from asking clients out to dinner and basically turn down invitations," said a bank employee in his 40s. "We've also been asked not to attend any gatherings of more than six people." Predictably, restaurants are being battered. TableCheck, which mainly handles reservations for medium- to high-priced restaurants, said cancellations soared to more than 20% at the end of February from around 9%.

New entry restrictions for visitors from China and South Korea have also dealt a blow to popular tourist draws. "The number of customers has fallen 90% and may drop to zero because of the new restrictions," said a worker at a duty-free shop in Ginza.

More office employees are also working from home after Prime Minister Shinzo Abe called on businesses to adopt teleworking and other measures to contain the virus. Nikkei analyzed location data from millions of anonymous KDDI mobile phone subscribers and found that the number of daytime workers in the Shiodome business district fell about 20% year on year in the three days from Feb. 26 -- the day after Abe's appeal. The steep decline was attributed to companies heeding Abe's call. For example, cosmetics maker Shiseido told about 8,000 employees to work from home.

Companies are also staggering work hours to avoid congestion on public transportation. The work population in Shiodome showed a 9% increase after 6 a.m. and a 20% drop after 8:00 a.m.

As a result, trains are running more smoothly. East Japan Railway and subway lines in the Tokyo area recorded fewer delays from the end of January till early March. Only nine of the 32 train lines that Nikkei analyzed showed rush-hour delays of more than 10 minutes, down from a high of 27 lines recorded on Feb. 3.

An employee at a financial institution who commutes by subway said, "Before the change, the trains were so crowded I couldn't use my phone. But I don't have that problem these days." 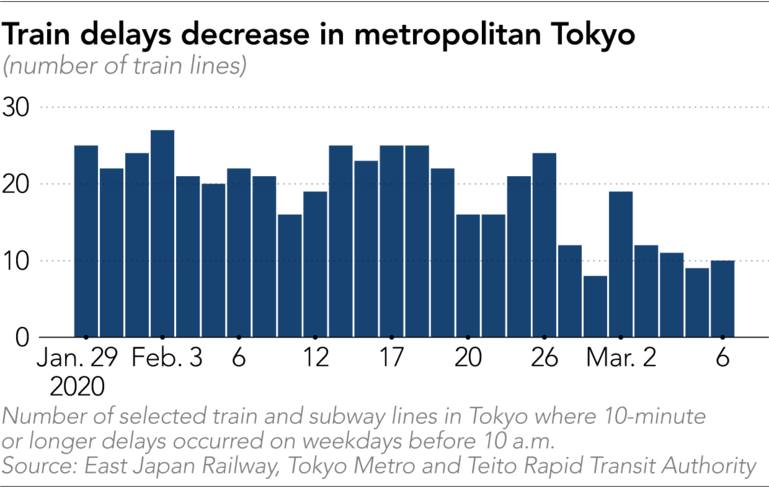 The government had already been urging companies to implement telework during the upcoming Tokyo Olympics to reduce rush-hour crowds. But the emergence of the coronavirus has made this an imperative.

As companies and employees realize the benefits of teleworking and staggered commutes, the practices will likely remain after virus fears subside. This could be one of the few silver linings of the viral outbreak, despite it having seriously damaged corporate earnings.