Chip and car industries heat up, while hotels and restaurants still suffer TOKYO -- The coronavirus pandemic is causing a "K-shaped recovery" around the world, characterized by some parts of the economy improving, while others languish.

Inflation varies among industries, and it is increasingly becoming clear that the stock rallies caused by monetary easing are not reflecting the state of the real economy.

One typical example can be seen in the semiconductor industry. Renesas Electronics, a major semiconductor company in Japan, has begun asking customers if it can extend delivery times to 12 weeks, twice the usual time, due to chip shortages. This is because demand for semiconductors for data centers has increased due to more people working online from home.

The demand for semiconductors for the automotive industry has also recovered rapidly since last fall. Taiwan Semiconductor Manufacturing Company recorded its highest quarterly revenues in the October-December period of last year.

In automobiles, sales of luxury cars in China are growing. Mercedes-Benz, BMW and Audi had record sales in 2020. Although vehicle production plummeted last spring due to the coronavirus, since last fall, demand has recovered and automakers are rapidly increasing production.

Another example can be seen in the copper price, which reflects overall trends in the manufacturing industry, and which has risen sharply since last spring. 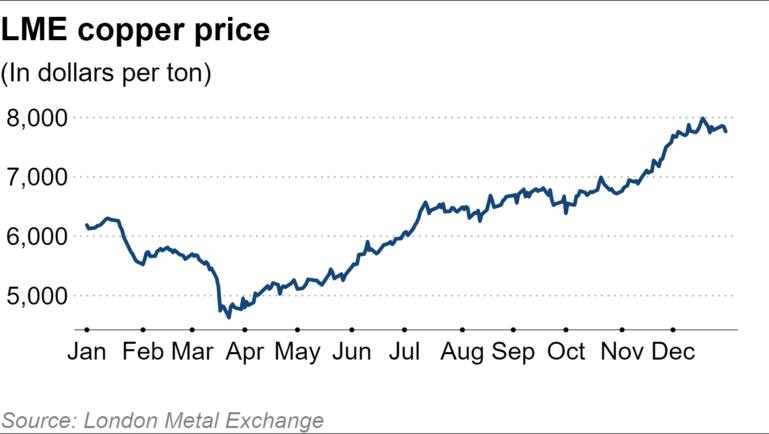 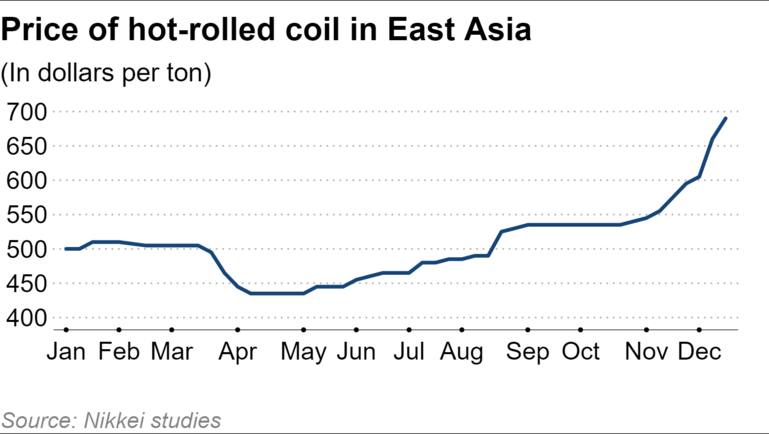 However, the healthy shape of such businesses is only one aspect of the global economy in the middle of a pandemic; the situation in the services sector is quite different.

In the U.S., sales at department stores fell sharply in December, down 21% year-on-year. According to the National Restaurant Association, more than 110,000 restaurants in the U.S. had either permanently closed or closed for long-term periods as of December 2020.

Prices for hotel stays in Japan, the U.S. and Europe have fallen more steeply when compared to the financial crisis in 2008-2009. Other data that show the divergence between industries come from the IHS Markit Purchasing Managers' Index -- it shows that business confidence in the manufacturing sector continues to be above the pre-pandemic peak, while the service sector remains almost consistently below. 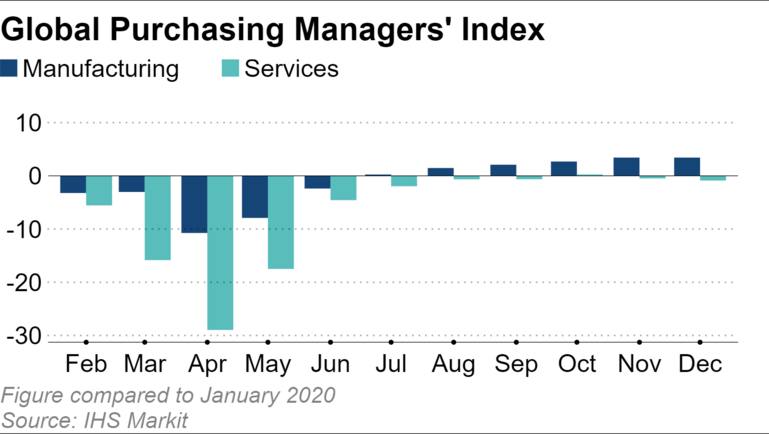 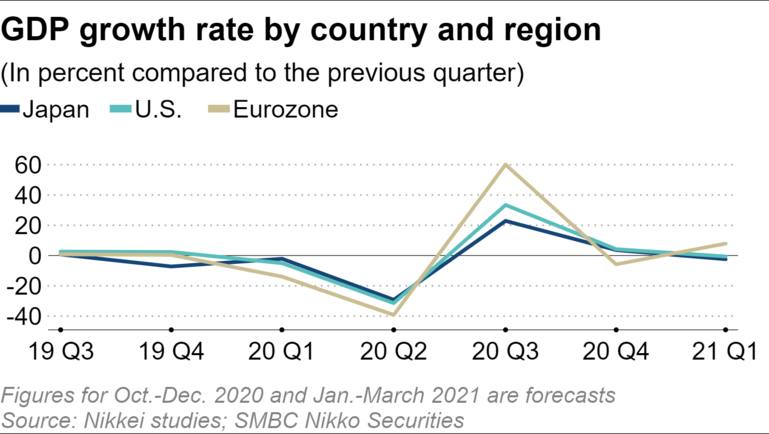 While the real economy is headed for another downturn due to the renewed mobility restrictions, global stock markets are at historically high levels, with global market capitalization topping $100 trillion for the first time last December. As of Friday, the figure rose 6% in a month to $105 trillion, according to QUICK-FactSet. The International Monetary Fund's forecast for global nominal GDP in 2021 is $91 trillion, marking an unusual era when market capitalization is set to exceed the amount of world GDP. Fumio Matsumoto, chief strategist at Okasan Securities, said, "The worse the economy is, the more stock prices are rising due to investors' expectations for economic stimulus measures." The amount of stimulus measures taken by governments around the world has reached 1,300 trillion yen ($12.5 trillion).

The people severely affected by the pandemic are largely part-time workers or young people working in the food and tourism industries. Bold economic measures are essential to support vulnerable workers in the service sector, but massive fiscal spending and monetary easing by central banks are causing financial markets to overheat. These fiscal and monetary policies will further widen the gap between the suffering part-time workers and the wealthy who will benefit from higher asset prices. 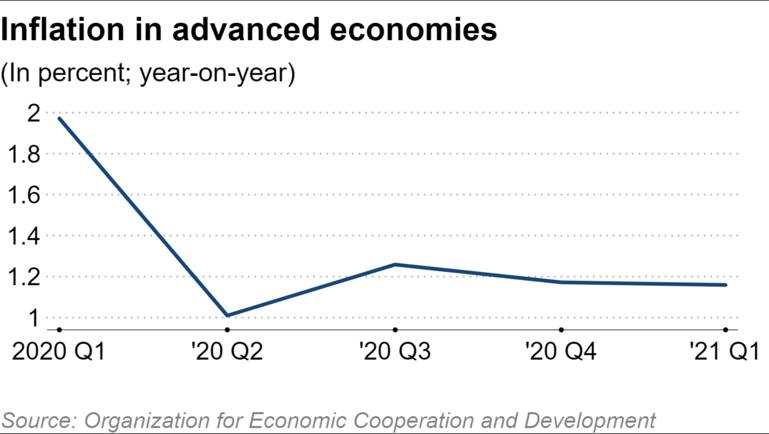 On the other hand, if inflation risk increases due to soaring asset prices and a booming manufacturing sector, financial markets will be more likely to see central banks tighten policy, but if this happens, it could lead to a plummet in stock prices.

Japan's inflation rate turned negative, but prices of home appliances such as desktop computers and microwave ovens are rising due to more people working from home. In the U.S., inflation has been steadily above 1% since last summer; housing prices for existing homes in December increased 13% year-on-year -- investors are becoming aware of inflation, and so U.S. 10-year treasury yields are gradually rising.

As the pandemic continues, it is becoming increasingly difficult for governments and central banks to steer their policies.