People commute, but stay away from restaurants 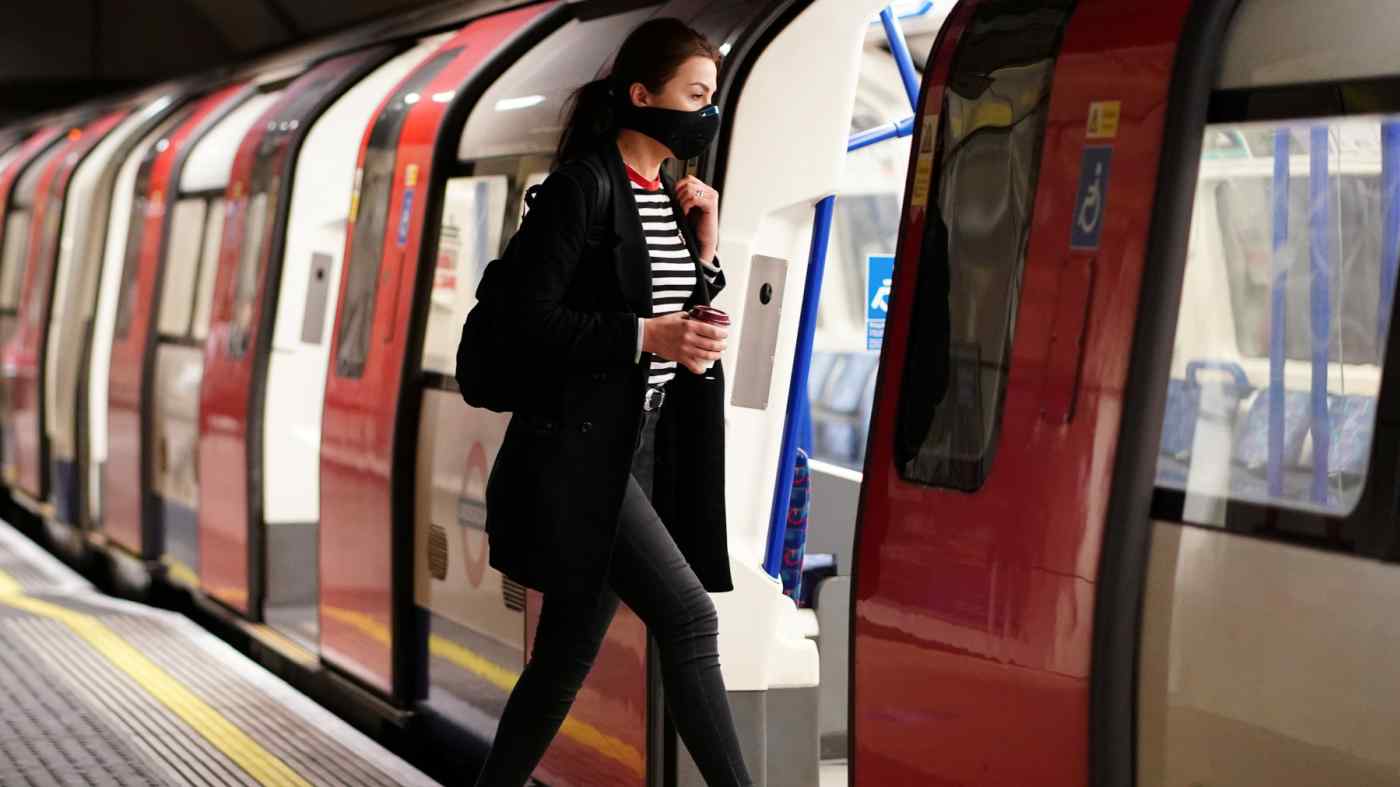 A woman is seen wearing a protective face mask as she gets on a train at London Bridge underground station on May 14.   © Reuters
JUN ISHIKAWA, TOGO SHIRAISHI and KAZUHIRO KIDA, Nikkei staff writersMay 22, 2020 06:56 JST | Japan
CopyCopied

BERLIN/PARIS/TOKYO -- Countries around the world have begun easing lockdowns as the spread of the coronavirus slows, but economic revival plans are being stymied by many residents' continued reluctance to risk venturing out.

Smartphone location data from Google shows that mobility in 17 major economies stood at 64% of the pre-pandemic baseline as of May 13, based on a seven-day moving average. This does not include China and Russia, for which no data is available.

While this is higher than the roughly 50% level in mid-April, when global limits on movement were strictest, it suggests that daily life will not return to normal for some time.

While still under a state of emergency, Tokyo has consistently been among the most mobile of the global cities examined, owing mainly to Japan's relatively loose restrictions.

Trips to workplaces were at 60% of normal as of May 13, while movement to retail and recreation facilities came to just under half the baseline -- comparable to Berlin, one of the first cities to start reopening. 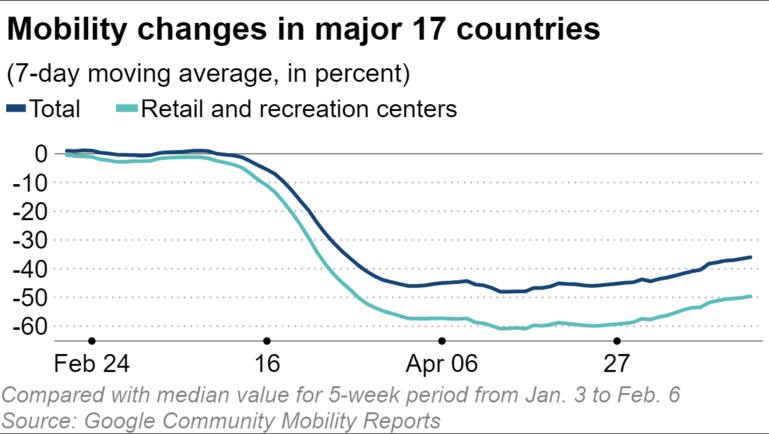 Meanwhile, areas of Japan where the state of emergency was lifted May 14 have seen mobility pick up over the past week, according to Tokyo-based Docomo Insight Marketing.

Travel in downtown Nagoya was at 54% of the Jan. 23 baseline as of Thursday, up 6 percentage points from a week earlier, while Hakata, on the southern island of Kyushu, saw a 7-point rise to 58%. Mobility also increased in Kyoto and Osaka in anticipation of the state of emergency being lifted Thursday, while Tokyo saw little change.

Mobility has rebounded significantly in some European cities. Berlin, which allowed restaurants and large stores to reopen in early May, is starting to regain some of its old hustle and bustle. The Google data shows trips to workplaces, which had fallen to half of pre-pandemic levels, recovering to 67% as of May 13.

But restaurants still struggle to attract customers. The proprietor of a cafe near the Brandenburg Gate, a major tourist attraction, said traffic is down to a tenth of typical levels. Tourism has all but evaporated, and social distancing rules requiring 1.5 meters of space between customers have cut the cafe's seating capacity to 40% of normal.

In France, 400,000 companies and stores were allowed to reopen their doors for the first time in two months on May 11. Yet travel for retail and recreation in the Paris area, while up from its nadir of roughly 10% of the pre-pandemic baseline, has only risen to 29% -- well below the big-country average of about 50%.

Ridership on trains and buses is down to 32% of normal levels around the capital, where face masks are mandatory and riders at rush hour must carry documentation showing a legitimate need to travel. Authorities, aiming to limit passenger traffic to 15% of capacity as a precautionary measure, are encouraging workers to continue telecommuting.

Mobility has slow to increase in Manhattan and London, which remain largely locked down. Travel to workplaces and on public transit has risen in both areas, but only to around 30% of baseline levels. New York City is considering a reservation system for its busy subways to limit crowding when the city begins to reopen.

Germany and France are also not out of the woods yet. The progress they have made could be wiped out if a second wave of infections forces them to reimpose lockdowns.

The European Central Bank estimates that under its worst-case scenario, eurozone gross domestic product could sink as much as 15% this quarter, or an annualized 50% to 60% -- significantly worse than the 20% to 40% expected for Japan and the U.S.

The ECB forecasts a 6% rebound in the third quarter. But if the slump in activity persists for too long, it could take until 2023 for GDP to recover to pre-pandemic levels.