Medium- and long-term structural factors such as investment curbs and rising demand in anticipation of decarbonization efforts are sending prices soaring.
Datawatch

TOKYO -- Prices of mineral resources and other commodities have been rising sharply since the middle of 2020, reflecting not only a rapid recovery in demand but also tightened supply resulting from stagnant mining operations and distribution services.

While soaring resource prices are led by near-term factors, some experts warn that the trend will be temporary. However, there are medium- and long-term structural factors such as curbs on investment and an increase in demand in anticipation of further decarbonization efforts.

The Thomson Reuters/Corecommodity CRB Index, which tracks comprehensive price moves of international commodities, has continued to rise, hitting the 212 level for the first time in about six years on June 11. From early June 2020, copper prices jumped 70% and crude oil prices doubled.

Alarmed by soaring prices, China toughened trading restrictions on commodities like copper and iron ore in May.

Although price trends may be temporarily corrected when speculative investment retreats, medium- and long-term prices are determined by supply and demand. "Prices will get stuck at high levels as the balance of supply and demand is tightening," said Masayuki Noumi, a vice president at Mizuho Bank. The balance of supply and demand for resources has tightened because of short-term factors such as slowing marine transport and mining operations amid the COVID-19 pandemic as well as a steep pickup in demand, especially in China, the U.S. and Europe. Inventories of copper and nickel have contracted 60% and 40% from five years earlier, respectively. Prices of commodities are rising in reverse proportion to inventory declines.

An analysis of supply and demand on a medium- to long-term basis reveals constraints on the supply side stemming from investment shortages. Big mining companies have squeezed capital investment as a result of excess spending in the past. They aggressively spent to boost output in the 2000s when resource prices continued to rise on strong demand in emerging economies. 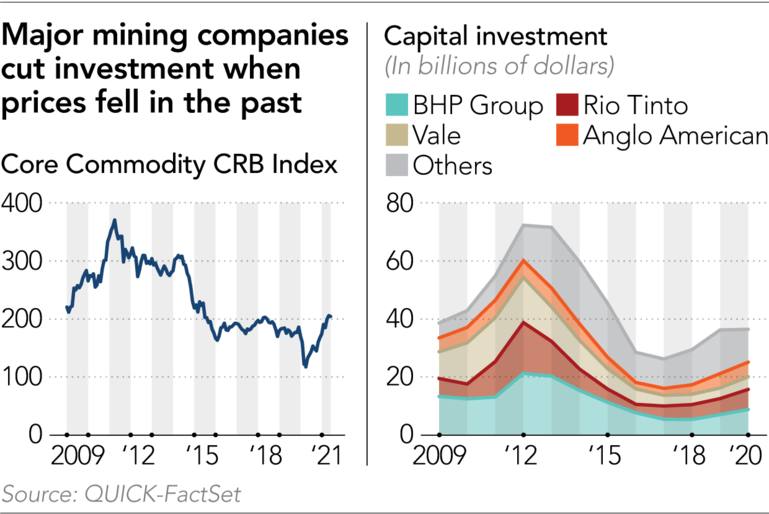 However, as surplus capacities became apparent due to the bursting of the resources bubble following the global financial crisis, they have cut back on new investment. From 2016 to 2020, capital investments by the top eight mining companies -- such as the Australian-British BHP Group and British-Australian Rio Tinto -- totaled $156.6 billion, down roughly by half from $303.5 billion in the preceding five years from 2011 through 2015.

As a result, combined production of gold, silver and copper in the five largest-producing nations peaked in 2016. "As 10 years or so are needed to develop a mine, reduced investment leads to long-term supply constraints," said Takayuki Homma of Sumitomo Corporation Global Research.

Investment in crude oil has also been decreasing. Annual capital outflows for the excavation of crude oil have fallen to $100 billion from $400 billion five years earlier, said Jeremy Weir, CEO of resources trading company Trafigura, warning that concern about supply causes prices to increase on a long-term basis. Moves by countries around the world toward carbon neutrality, designed to achieve net-zero emissions of greenhouse gases, are creating new constraints. The amount of wood cut in Canada -- a major supplier of timber -- has dropped behind skyrocketing rises in timber prices. In 2018, 748,000 hectares of forests were felled, compared with an average of 1 million hectares annually between 1995 and 2005.

Provincial governments in Canada have toughened felling management as the absorption of carbon dioxide in forests in the country has decreased. Felling quotas allotted to forestry companies have decline yearly, according to Shawn Lawlor, Japan representative of the Council of Forestry Industries Canada.

The trend toward carbon neutrality also causes a shift in demand for resources. Demand for mineral resources such as copper and nickel used in electric vehicles will double in 2040 from 2020, according to the International Energy Agency.

Nationalism over mineral resources is emerging in countries that have them, especially developing nations, in anticipation of long-term crunches in supply and demand. Chile, for example, decided in May to sharply hike taxes related to royalties on sales of cooper as part of efforts to corral mineral resources for domestic profit.

Commodity prices have spillover effects on a wide variety of prices, and supply constraints affect rising consumer prices. In addition, supply shortages of copper and other resources could become an unexpected roadblock hindering decarbonization.