TOKYO/NEW YORK -- Decades of some countries cutting their corporate tax rates as they compete to lure big businesses look set to screech to a halt after some 140 nations and regions agreed a new global minimum rate of 15%.

As leaders of the Group of 20 countries in late October endorsed new global tax rules including the minimum rate, U.S. Treasury Secretary Janet Yellen praised the deal, saying it would "end the damaging race to the bottom on corporate taxation."

Now, Nikkei analysis based on Organization for Economic Cooperation and Development data suggests that Japan, the U.S. and other countries, including those in Europe, should expect big revenue gains in the wake of the agreement, after potentially losing out on a total of 170 trillion yen ($1.5 trillion) over the past decade.

The average ratio of corporate tax revenue to nominal gross domestic product in 36 countries on which the OECD has continuously comparable data dropped to 2.2% between 2009 and 2018 from 2.6% over the previous decade. If the ratio had remained at the level seen in the 2000s, total tax revenues in those countries would have exceeded the actual amount received by 17%, or $1.5 trillion, in the decade through 2018, Nikkei's analysis shows.

To fill loopholes, the new international tax rules set a minimum global level of corporate tax at 15% for multinational corporations with annual sales of more than 750 million euros ($850 million). The OECD estimates the deal will bring in an extra $150 billion in corporate tax per year around the world. It may increase global corporate tax revenue by about 6%. The rules are expected to dramatically dull the appeal of many tax havens. Ireland has already decided in principle to raise its corporate tax rate to 15% from 12.5%. Elsewhere, an executive at a financial institution based in Bermuda, which currently charges no corporate tax, said many businesses in the British colony are considering relocating though they don't openly admit it.

The new tax rules have also established a mechanism for a so-called digital tax, which will share among nations the right to tax American IT giants and other highly-profitable companies. The tax will be levied on companies with global sales in excess of 20 billion euros and a pretax profit margin of more than 10%. The IT industry is already more profitable than the auto sector, often seen as a symbol of manufacturing businesses, but has kept paying less tax as a percentage.

The new rules are "epochal" as they have upset the 100-year-old principle of taxation based on the presence of profit-generating sources and permitted the right to levy tax in the place where services are consumed, said Masao Yoshimura, professor at the business law department of Hitotsubashi University in Tokyo, in a view echoed by many experts. 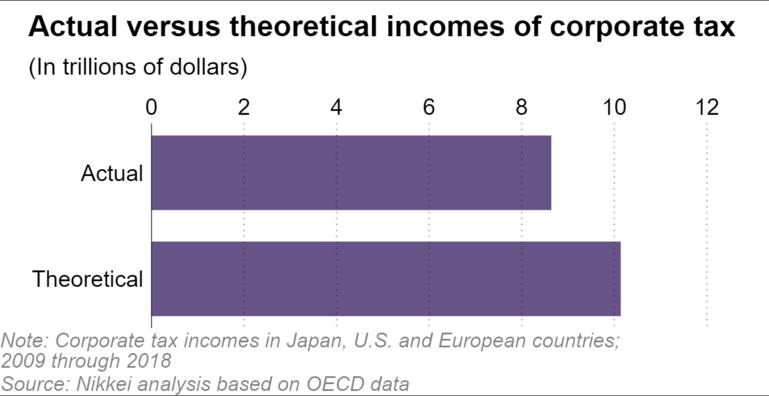 International tax regulations have also been revised to boost funding for the global battle against the COVID-19 pandemic.

A cut in corporate tax has long been expected to increase overall tax revenue by stimulating corporate activity and enabling citizens to share wealth on a broad basis. But the gap in wealth has expanded because business enterprises have passed profit gains on to investors instead of using them for investment and pay hikes. As their new challenge, advanced countries need to work out a framework to pour corporate profit into next growth.

Not everybody has welcomed the new rules, however. Some U.S. lawmakers took aim at the deal in October, with Republican Congressman saying it would leave "the fate of the U.S. economy to our foreign competitors."

Indeed, deep divisions in U.S. politics could yet scupper the regulations. Ratification by the U.S. requires support from two-thirds of senators, and the hurdle is high as Democrats barely maintain a majority in the senate. Without that, the "race to the bottom" could be set to rumble on.