A truck crosses the Friendship Bridge from Dandong in China to Sinuiju in North Korea.    © Reuters
Datawatch

Pyongyang continues to finance imbalance, despite lack of foreign capital

But even when the numbers appear to add up, official data often leaves more questions than answers regarding what passes between the two countries and how.

Going by figures released by China's General Administration of Customs, exports to North Korea fell to $168 million in 2018 from a monthly average of $277 million in 2017. 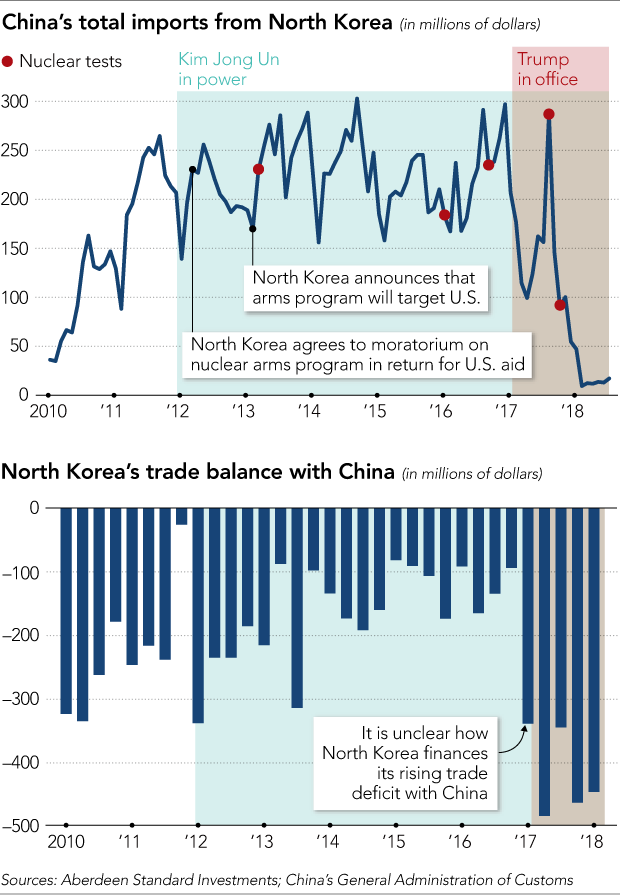 According to Alex Wolf, senior emerging market economist at Aberdeen Standard Investments, China's imports are of more significance, as they provide Pyongyang with much needed foreign currency. They plummeted to $17 million in July from an average of $143 million in 2017.

The deficit rose to a quarterly average of $414 million for 2017 through the first quarter of 2018 from $117 million between 2015 and 2016, despite Pyongyang having fewer means of accessing foreign capital.

This raises the question of how the Kim Jong Un regime funds its widening structural current account trade deficit.

In August, evidence emerged of North Korean coal being smuggled into South Korea via third countries. At the beginning of September, the U.S. Justice Department filed charges against a North Korean hacker in relation to the WannaCry global ransomware attack and the 2014 digital attack on Sony.

Wolf also suggested there are signs that China's stance on sanctions may be being relaxed amid hightened trade tenstions between Beijing and Washington.

"For China, it is not uncommon to discontinue series that become politically troublesome," said Wolf. "Interestingly, instead of fudging or faking it, they just discontinued it."