With a glut in supply as well as a diversification of energy sources, including the U.S. shale gas boom, the world is becoming less reliance on Middle East oil.
YOSHINOBU ONO and KYO KITAZUME, Nikkei staff writersJanuary 12, 2020 02:59 JST | Middle East
CopyCopied

TOKYO -- When U.S. President Donald Trump made a televised address about the confrontation with Iran at the White House on Wednesday, he talked about a new reality in geopolitics.

"America has achieved energy independence," he said. "We are now the number-one producer of oil and natural gas anywhere in the world. We are independent, and we do not need Middle East oil."

That perhaps explains the stability in oil prices despite the tumultuous start to the year.

The killing of Maj. Gen. Qassem Soleimani, Iran's top general, on Jan. 3 caused the world to shiver at the prospect of skyrocketing oil prices, with dire consequences for the global economy. But the spike in oil that followed Iran's retaliatory attacks against Iraqi bases housing U.S. troops quickly subdued, and oil futures in New York are back at $59 per barrel, around the price it was before the escalation.

The oil market's swift return to calm has underscored a sharp decline in the clout of the Middle East in the crude oil market. U.S. President Donald Trump and Vice President Mike Pence speak with senior White House advisers during a meeting about an Iran missile attack on U.S. military facilities in Iraq, in the Situation Room of the White House on Jan. 7. (White House handout via Reuters)

In addition to increased oil production in Russia and Latin America, a gush of supplies from the shale boom in the U.S. since the 2010s has put strong downward pressure on prices. In September, the U.S. became a net oil exporter for the first time since 1973, when monthly data for oil trade started being compiled.

Other oil producing countries outside the Middle East have also been ramping up output. New oil fields that will start operations in non-OPEC countries are expected to create a surplus capacity of some 7.7 million barrels per day in the six years leading up to 2023. Most of the oil fields that will come onstream in the period are projects that were funded in the first half of the 2010s, when crude prices hovered around $100 per barrel. Equinor, a multinational oil and gas developer based in Norway, started operating its Johan Swerdrup oil field in the North Sea in October. With a maximum daily output of 440,000 barrels, the oil field is expected to account for about 20% of Norway's oil production.

Global demand for oil will increase by some 4.85 million barrels during the 2018-2023 period, driven mainly by economic growth in Asian emerging countries, according to the U.S. Department of Energy.

But oil supply will grow faster than demand, which will be restrained by concerns about growing restrictions on the use of fossil fuels because of their role in climate change and the weakening of the world economy. China, the world's largest crude importer, bought 43.7% of the oil it consumed in 2018 from the Middle East, down 12 points from 2001, according to an estimate based on data provided by the International Trade Center.

China has increased crude imports from Russia and Brazil as part of its efforts to diversify the sources.

Similarly, the Netherlands has expanded oil imports from Russia and the North Sea while lowering the Middle East share by 20 points.

Geopolitical risks in the Middle East, therefore, have a smaller impact on the global market compared to the past.

A drone attack on a leading oil processing facility in Saudi Arabia in September caused a temporary loss of nearly half of the country's overall output, driving up crude prices by 15%. But the market regained calm swiftly as drawdowns of oil inventories and reserves eased concerns about supply.

Japan, meanwhile, is far more heavily dependent on oil from the Middle East than most other consumer nations. In 2018, nearly 90% of Japanese oil imports came from the region, roughly on the same level as that in 2001. 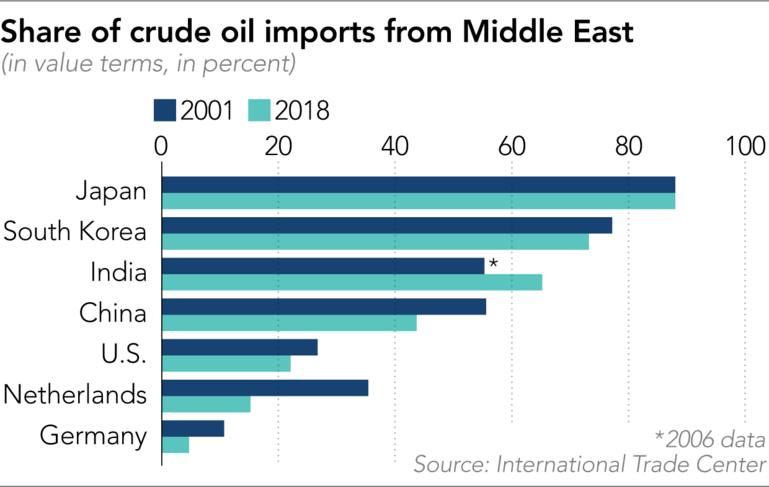 Japan has failed to diversify its oil imports. Takashi Tsukioka, president of the Petroleum Association of Japan and chairman of Idemitsu Kosan, a major domestic oil refiner, says it is not easy to switch suppliers partly because oil refineries in Japan are designed for processing crude from the Middle East.

At the Wednesday address at the White House, Trump said that America's new energy independence has created "options in the Middle East."

The shift in the balance of power in the oil market has given Trump a freer hand to explore a more assertive foreign policy. Fear of an oil crisis had always been a pall that prevents an escalation of conflicts, but that seems to be changing in the new reality.

The stabilization of oil prices, therefore, may not be a cause for celebration. A reduced U.S. footprint in the Middle East could lead to destabilization, potentially endangering energy transport and disrupting supply. For countries like Japan that depend so much on the region, their interests may not align with that of the U.S. president.