TOKYO/GUANGZHOU -- Chinese telecom equipment maker Huawei Technologies, a symbol of high-tech competition between the U.S. and China, had more patent applications than any other global company in 2018. But a closer look at its filings suggests the company still trails American rivals in terms of patent quality.

Only 21% of patents filed by Huawei, which is under strong pressure from the U.S. government, could be classed as highly innovative, according to researchers.

The pace of the company's drive to buy patents and recruit engineers from American companies in a bid to raise the level of its innovation has alarmed the U.S. government.

The list of top patent applicants has changed dramatically since 2005, when it was led by Netherlands-based Philips, Japan's Panasonic and Germany's Siemens.

Huawei, which was not among the top 20 applicants that year, started climbing quickly up the rankings in the late 2000s. The company has topped the list in four of the past five years.

Huawei made 5,405 international patent applications in 2018, about twice as many as those by Japan's Mitsubishi Electric at No. 2 and U.S. chipmaker Intel in third place.

But Huawei's rise in the rankings may not necessarily correspond with a great advance in innovation. 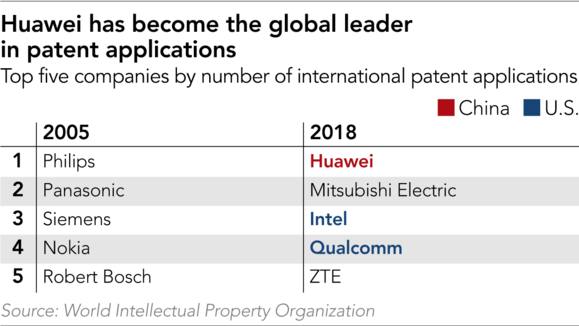 The "quality" of patents tells a different story, according to an analysis by Patent Result, a Tokyo-based research company. Patent Result has assessed the quality of the patents filed in the U.S. by Huawei and its main rivals according to a set of criteria including originality, actual technological applications and versatility. The patents were group based on how far their quality deviated from a baseline figure.

Patents with a deviation of 55 or higher are considered to represent "high quality" or truly innovative inventions. This category accounts for 21% of Huawei's patent applications, a ratio far lower than Intel's 32% and U.S. mobile chipmaker Qualcomm's 44%.

In recent years, Huawei has been on a patent-buying spree in an apparent bid to boost the overall quality of its huge portfolio of patents on crucial technology. Huawei has purchased some 500 patents from foreign companies, including 250 from U.S. groups. The acquisitions include patents on technologies concerning digital signal transmissions and network transfer control. The "high quality" patents account for some 67% of these.

IBM and Yahoo sold large numbers of patents to Huawei, selling 40 and 37 respectively.

Buying patents is a common way for a company to climb the technology ladder. But Huawei stands out among Chinese IT powerhouses as the most aggressive buyer of patents. E-commerce company Alibaba Group, for instance, has purchased 43 patents from major U.S. companies, while Tencent, another big Chinese internet company, has bought only one.

Huawei has also been scouting the U.S. tech industries for talent. U.S. engineers and technology experts hired by Huawei now form the core of the company's research and development team.

Patent Result has listed Huawei's 30 best engineers by using its assessment of patents on technologies developed by the company. The list is dominated by those recruited from foreign companies, mainly in North America, who number 17.

These 17 engineers have made some 370 high-quality patent applications (including ones co-applied with colleagues). People poached from U.S. companies like Motorola and other IT groups are now acting as the driving force behind Huawei's technological advance. The Chinese group's all-out efforts to suck up technological and human resources from the U.S. has put American policymakers on alert.

The U.S. has increased its vigilance on the grounds that technology has been illegally leaked. In May, it added Huawei to its so-called entity list, effectively banning U.S. companies from selling components to the Chinese group, which it accuses of threatening its national security.

In August, Washington expanded the scope of the ban to include research institutions. The Senate is now preparing a bill that would give the federal government the power to block Huawei's acquisition of patents, potentially hindering its innovation attempts.

In July, Republican senators introduced a bill to block Huawei from buying or selling U.S. patents.

Huawei is striving to reduce its dependence on foreign technologies. It has developed its own chipset for fifth-generation wireless telecommunications. In August, it unveiled a new operating system, dubbed HarmonyOS, or hongmeng in Chinese. The Chinese word is used as a metaphor for the "primeval chaos" of Chinese mythology.

The name indicates the company's intention to overcome the current chaos surrounding its future due to China's trade war with the U.S.

But one Chinese business expert says the name has another meaning.

Hongmeng can also be written using two Chinese characters which translate as "Red Dream," which, as well as including the red color associated with communism, has echoes of Xi's "China Dream" slogan popularized in the country in recent years as an ambition to make China the world's dominant power.

If Huawei's choice for the name of its new OS is any indication of its own policy, then the struggle for global technological supremacy between the U.S. and China is only likely to become more fierce in the years ahead.