TOKYO -- Wholesales prices are on the rise around the world, rising between 1% and 4% through January in major countries compared with last fall.

Soaring prices for crude oil and metals have led to higher prices for chemical and steel-derived products. Economic recoveries in China and the U.S., as well as disruptions to maritime transportation, have also pushed up wholesale prices.

Looking at the current corporate goods prices or producer price indexes in economies such as Japan, the U.S. and countries in Europe, the numbers have increased about 1% in Japan and the U.K., 2% in the U.S. and Germany, about 3% in Russia and about 4% in France, since last fall.

The corporate goods price indexes in the U.S., Germany, Russia and France have exceeded the levels recorded in January 2020, before the pandemic hit.

The rise in oil prices is a leading factor in pushing up these indexes. The rollout of COVID-19 vaccines and economic stimulus packages in various countries raised expectations of oil demand recovery. 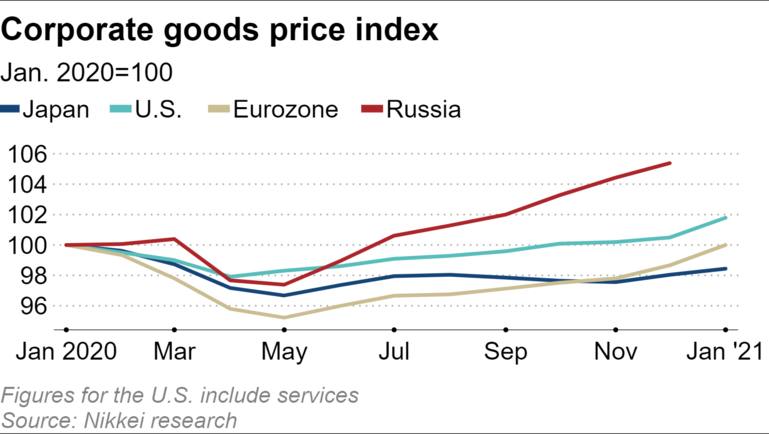 Major oil-producing countries meanwhile have continued to coordinate production cuts. Investors also bet on the commodity markets amid monetary easing by numerous central banks; the price of New York crude oil futures is now around $60 per barrel, higher than it was in January 2020, right before the pandemic took hold across the world.

The oil price surge has also spilled over into petrochemicals and other materials.

Monish Patolawala, chief financial officer of science and innovation conglomerate 3M, said, "we are seeing inflation... our aim is to have prices that will go up year-on-year to take into account the inflation that we are seeing," suggesting the possibility that the company will raise the price of its products.

According to Wolf Research, the price of 3M products have already begun to rise in Europe, the Middle East and Asia.

A severe cold snap that hit the U.S. state of Texas in mid-February exacerbated the supply shortage. On the other hand, as China's economy recovers, the trading price of polypropylene -- a thermoplastic polymer used in a variety of applications, including packaging, textiles and auto parts -- in Asia has risen by over 10% compared to the beginning of the year. This has led to a shortage of resins in Europe.

According to IHS Markit, the ratio of the stock of finished goods index to the new orders index is at its lowest point in a decade. 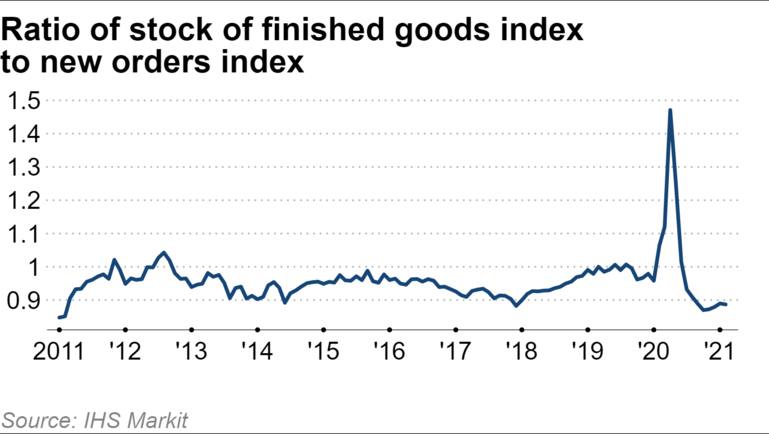 Meanwhile, the international price of copper is at its highest level in about nine and a half years, and rhodium, which is used as a catalyst to purify automobile emissions, has reached a record high. The price of iron ore has also risen due to increased purchases of the commodity by China.

In February, Paul Jacobson, CFO of General Motors, talked about the outlook for the fiscal year ending December 2021, saying, "we expect commodity prices to be a significant headwind as platinum group metals and steel prices have seen major increases in recent weeks and months." The procurement price of platinum group metals has increased 2.2 times since May 2020, resulting in an annual cost increase of billions of dollars.

The Consumer Price Index in the U.S. has been above 1% several months this year compared to the same months in 2020. On the other hand, Japan's CPI (excluding fresh food) fell for six consecutive months through January 2021 compared with the previous year. If the price of materials spills over to final products, it could depress consumption.

Household savings have increased in developed countries since the outbreak of the pandemic. With countries implementing economic stimulus measures, including the $1.9 trillion package by the Biden administration in the U.S., consumption could increase significantly in the future.

If this fuels inflation, long-term interest rates could rise further. Takeshi Ueno, an economist at the NLI Research Institute, said: "There is a risk that financial markets will be jittered by higher-than-expected inflation."