Low-rated bonds lose their shine amid concerns for global economy Now, following an autumn that saw office-sharing company WeWork fall from prized startup to a unicorn-in-restructuring, investors are waking up and smelling the coffee.

Corporate bonds issued by excessively indebted companies are falling in price in the global financial market, as investors start to withdraw money due to the increased possibility of defaults amid concerns about an economic slowdown around the world.

The price of a bond issued by WeWork parent, We Co., has fallen to 70% of its par value, despite the full support of top investor SoftBank Group.

Companies which have grown on the back of leveraged operations amid worldwide monetary relaxation policies are coming under pressure to make strategic changes. We Co., which is symbolic of excessively indebted companies, has seen the price of its dollar-denominated bond with five and a half years left to maturity fall 30% since the end of August. As investors unload their holdings for fear of further price falls, the balance of supply and demand for the security is collapsing.

We Co. has yet to regain popularity on the secondary market despite a pledge from SoftBank to pour billions of dollars into the company in October after its initial public offering was postponed.

In Britain, bonds issued by Aston Martin, the automaker known for the cars used in the James Bond movies, are under strong selling pressure. The price of a bond with two and a half years remaining has dropped 10% from July.

At Aston Martin, interest payment on loans exceed operating profit, which constitutes the definition of a zombie company. The expansion of debt is unstoppable at the company that decided on a new bond issue in September.

Intelsat, an American communications satellite services provider, and PizzaExpress, a British pizza restaurant chain, have witnessed the price of their bonds plunging to between a quarter and a half of their par value on the secondary market. Although investors can earn great returns if the bonds are bought back at face value when they mature, they are reluctant to buy them because of high risks.

PizzaExpress, which is under the wing of a Chinese investment fund, has aggressively expanded its restaurant chain in China but is falling deeper into negative net worth because of poor earnings. 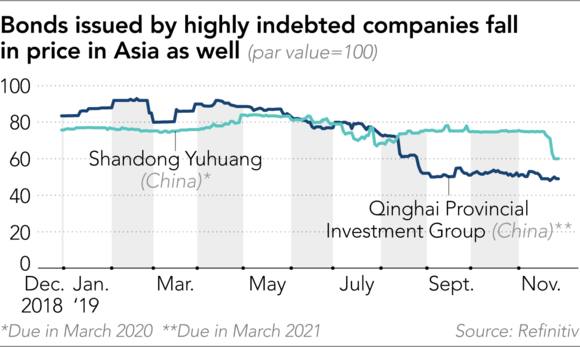 In the meantime, the price of a bond issued by major Chinese chemical company Shandong Yuhuang Chemical due in March 2020, dropped 20% in November and now stands at 60% of its par value. S&P Global Rating lowered its rating of the bond to CC from CCC-plus on Nov. 22, citing largely unavoidable defaults on domestic Chinese bonds maturing in November and December.

The chemicals manufacturer has allegedly fallen into difficulties due to mutual debt guarantees and other inextricable financial links with Shandong province, where the company is headquartered, which has seen a string of other private businesses suffer payment crunches.

A bond issued by aluminum maker Qinghai Provincial Investment Group, due in March 2021, has also fallen 40% since the start of this year to less than 50% of par value.

Although financial support from the provincial government of Qinghai, a major shareholder, is expected, the financially ailing company fell behind in its payments in February and August. It is widely expected to default on the bond.

Defaults by Asian companies are gradually increasing against the backdrop of worsening global economic conditions. Delta Merlin Dunia Textile of Indonesia delayed a loan payment in September, while credit rating agencies have downgraded Jain Irrigation Systems, an Indian company selling irrigation systems around the world, to selective default after it fell into arrears in its partial loan payments. 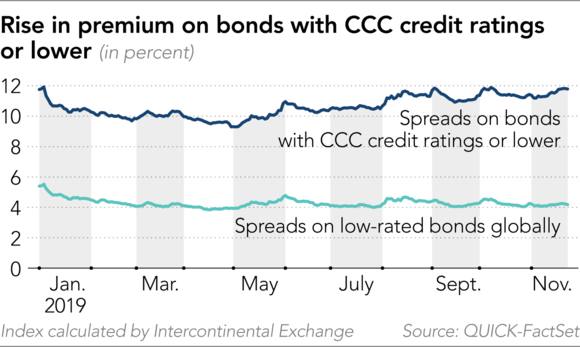 Corporate bond prices are falling sharply for issuers whose credit standing does not warrant investment, especially those with CCC status. The index tracing prices of bonds carrying CCC ratings and below have dropped by 7% from a peak in April amid global monetary easing.

Spreads on U.S. government bonds have risen to an average of about 12%, or the level at the start of this year when concerns about a U.S. economic slowdown were increasing, showing a clear contrast with low-rated bonds as a whole.

Explaining the development, Michael Lillard, chief investment officer of PGIM Fixed Income in the U.S., said investors were shifting funds to BB-rated bonds and other relatively safe securities from bonds of highly indebted companies out of concern about an economic slowdown.

While low-rated bonds, which offer high returns, attracted $34.8 billion from the start of this year until Nov. 27, investors have become more selective about them.

According to S&P, defaults occurred on 101 bonds credit-rated by the company as of Nov. 21, already topping the 2018 tally of 82. The total includes a series of defaults committed by energy companies such as Chesapeake Energy, a developer of oil and natural gas.

Credit easing serves as a tailwind for low-rated bonds and other risk-laden assets. But uncertainties remain because of the murky outlook for ongoing U.S.-China trade negotiations. There was a 50% chance of a recession in the U.S., said American financial advisory company Guggenheim.

The availability of ample funds even for companies with weak financial standing is coming to an end. The availability of ample funds even for companies with weak financial sanding is coming to an end.