BRUSSELS/LONDON/TOKYO -- Investors and fund managers worldwide are coming to grips with a growing phenomenon: a huge and rapidly expanding pile of negative-yielding debt.

The global stock of bonds with negative yields has doubled since the beginning of the year to around $17 trillion. Investors are snapping up such debt even though they are guaranteed to suffer a loss if they hold it to maturity, betting on further rises in bond prices. Speculation is swirling that central banks will further ease their already super-loose monetary policies in response to signs of economic downturns.

In Europe, one bank is even letting homebuyers take out mortgages at a negative rate, which basically means it is willing to pay customers to borrow money. This is fueling concern about a new asset price bubble in the region.

Some economists are warning that the negative rate trend, if it continues to spread, could damage the financial system and the real economy. Asian countries, too, are bracing for an era of endemic negative rates as a result of flagging economic growth. 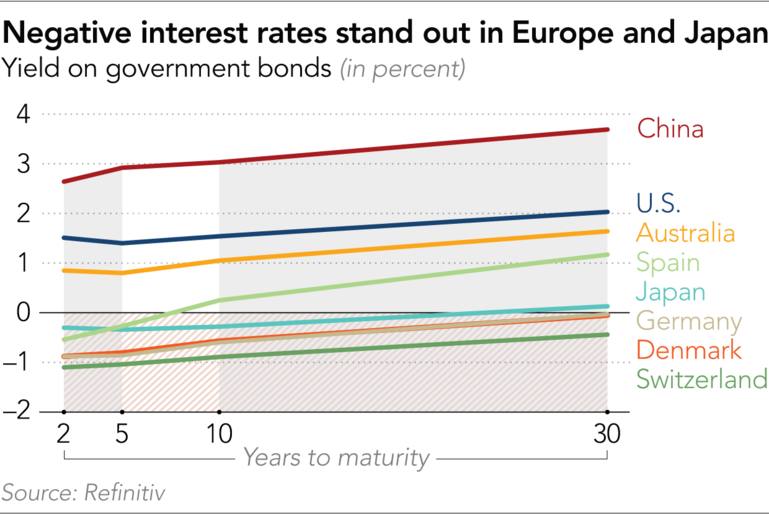 Now, a quarter of the world's investment-grade debt securities bear subzero yields. Negative-yielding bonds are proliferating especially in Europe and Japan, where the central banks have pushed down their rates below zero.

Swiss government bonds, for example, now have negative yields all the way out to 2064, 45 years down the road.

Negative yields occur when bond prices rise to levels above the value of the principal at time of maturity and the stream of interest payments, meaning that bond holders have to pay for the privilege of lending issuers their money.

The yield on 10-year U.S. government bonds is hovering slightly below 1.6%. Adjusted for a projected inflation rate of slightly below 2%, the yield is in negative territory.

In Asia, 10-year Japanese government bonds are offering negative yields. Real government debt yields are also below zero in such Asian markets as Australia, New Zealand, Hong Kong and Taiwan. The same seems to be about to happen in South Korea and Singapore as well. In Europe, financial institutions can raise funds at negative costs. And in August, Jyske Bank, Denmark's third-largest bank, started offering a 10-year fixed-rate mortgage with an interest rate of -0.5%, becoming the world's first bank to pay money to mortgage borrowers.

"Right now we have a historic remortgaging on house owners' debt," said Mikkel Hoegh, housing economist at the bank.

Negative borrowing costs are fueling a housing boom in Denmark. The housing price index compiled by Statistics Denmark, the government statistics agency, rose to an all-time high of 116.1 in the first quarter of 2019, using 2015 as a base of 100.

If rising house prices stimulate speculative housing investment, the risk of a bubble will increase.

Some economists are sounding the alarm. Excessively low interest rates decimate the profits of banks, forcing them to cut back on lending with negative effects on the economy, warned Markus Brunnermeier, an economics professor at Princeton University.

Brunnermeier is one of the economists promoting the view that a policy rate decline below the so-called "reversal interest rate" -- the rate at which easy monetary policy reverses and starts to provide a disincentive for lending -- depresses rather than stimulates the economy.

The European Central Bank's negative interest rate policy, says the German Savings Banks and Giro Association, cost banks in Germany about 2.3 billion euros ($2.56 million) in 2018, equivalent to 10% of their profits in the previous year.

The total market value of banks across the globe has fallen 20% from the beginning of 2018 to $6.8 trillion. Low interest rates can also hit spending by people who depend on interest income, such as senior pensioners.

The ECB and the U.S. Federal Reserve are scheduled to hold policy meetings this and next week and are expected to decide on additional measures to open the monetary taps further.

But the world economy is beginning to falter despite the extremely easy money environment that has been in place since the global financial crisis that started in 2008. This has cast doubt on the conventional wisdom that low interest rates are the answer.