Smartphone users in Taiwan consume more than double the amount of data per month than their counterparts in any other Asian economy. (Photo by Ken Kobayashi)
Datawatch

Adoption of 4G and unlimited packages push down revenues

LONDON -- In the space of just four years, the Taiwanese have become Asia's most prolific users of mobile data, second in global terms only to the Finns, according to figures released by industry analysis company Tefficient.

Taiwanese use twice as much monthly data per SIM card holder as South Koreans, more than three times as much as Japanese and nearly six times much as Singaporeans.

How do Taiwanese consumers get through all that data? "Streaming video and TV, and all those social messaging apps that are becoming more and more image- and video-centric," said Fredrik Jungermann, director of Tefficient.

Taiwan's average monthly mobile data consumption shot up to nearly 10.7 gigabytes per SIM holder by the end of 2017, according to Jungermann. That is the equivalent of streaming roughly 11 hours of Netflix content per month.

Extensive consumption, however, has left operators with a conundrum. How do you turn an all-you-can-consume business model into one that lets you capitalize on the appetite for data that your customers have developed? 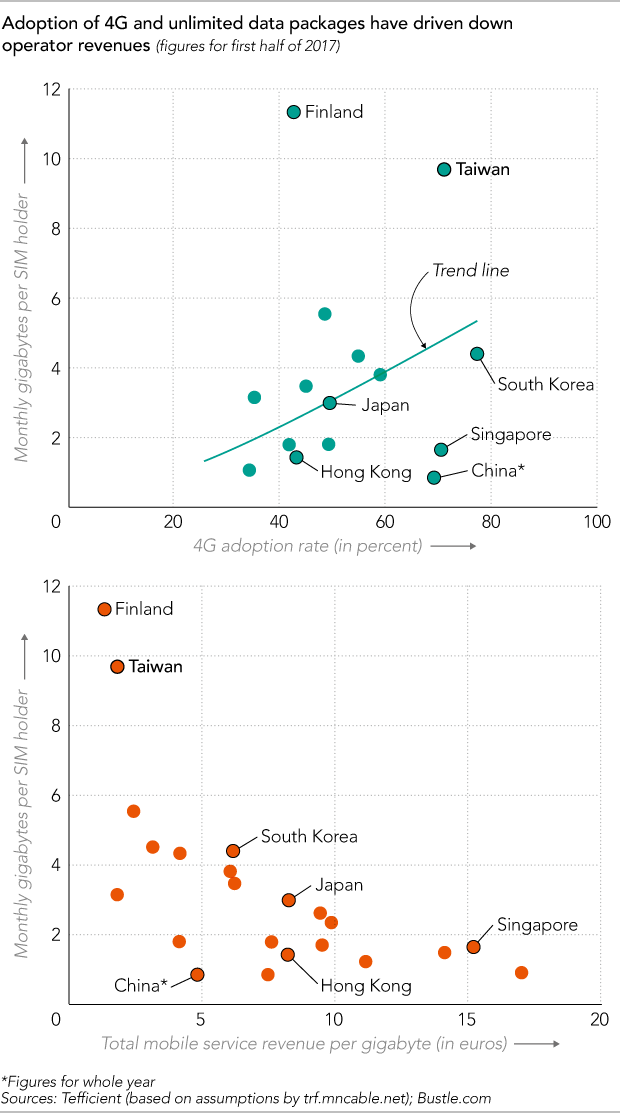 According to Cai Shiyu of research company Analysys Mason, when new operators entered the market and challenged the three established providers a few years ago, they began offering unlimited data plans in an attempt to capture market share.

Unnerved by the threat, the existing players dropped their prices and launched similar unlimited data packages. FarEasTone was the first, offering a plan for less than $45 per month, and its competitors followed soon after. The company's unlimited 4G data plan is now available at just 899 New Taiwan dollars ($30) a month.

Another factor behind the surge was the adoption of 4G services, with faster connections stimulating more data use, said Jungermann. Taiwan was something of a latecomer to the 4G party, introducing it in 2014, a good two years after other mature markets.

The increased connectivity, together with the growth of video streaming, led to a change in user behavior, he said.

When data is seen as expensive, as it is in Singapore for instance, consumers tend to be cautious and rarely use up their monthly allowance, as many operators charge considerable fees once users go over their limit.

Jungermann said a similar situation has played out in France, and the same could happen in Italy.

To avoid that predicament, he said, operators should not get dragged into a price war with newcomers, as many will face operational problems such as lower network quality and poor customer service.

One method of curbing data use, said Shiyu, is to throttle connection speeds beyond a certain threshold. FarEasTone, for example, limits speed to 5 Mbps once customers use more than 10 gigabytes a month.