The number of collective actions in the IT industry between 2016 and 2020 increased almost ninefold over the previous five years. (Source photo by Reuters)
Datawatch

Tech workers band together to push for workplace reforms

TOKYO -- Tech workers are banding together to demand better working conditions as well as more accountability and transparency from their employers, marking a major shift for an industry long known for shunning collective action.

The move comes against a backdrop of expanding disparities among employees themselves, as well as growing public concern over tech companies' use of personal data and other issues.

There were 127 cases of collective action in the IT industry in 2020, according to Collective Action in Tech, a project supporting movements by tech workers in the U.S. and other countries. The number of such cases between 2016 and 2020 totaled 305, up steeply from 35 in the previous five years.

Negotiations for higher pay are not the sole driving force of labor movements in the U.S. While the principal issues in the 305 collective action cases between 2016 and 2020 included "work terms and environments" in 125 and "pay and benefits" in 124, "ethics" and "discrimination," among other themes, increased sharply to 89 and 37 cases, respectively.

Tech companies are being exposed to growing social criticism for their uneven distribution of wealth and control of data resulting from their rapid growth. The possibility is emerging that regulations will be toughened to apply the brakes to their growth. A sense of crisis among tech workers under these circumstances is gushing out in the form of their collective activities. 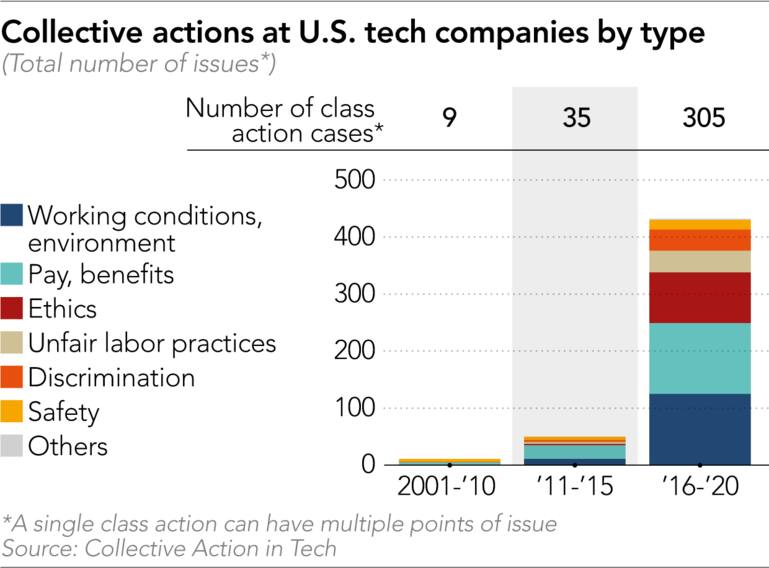 Some 2,000 food delivery workers took to the streets in New York in April, demanding that Uber Technologies and other service providers ensure their safety during work and increase wages.

In Pittsburg in July, 70 or so engineers and other workers at a subcontractor for Google concluded a labor contract with their employer, marking the launch of efforts to improve the treatment of many nonregular employees at IT companies.

American tech companies, such as those in Silicon Valley, have been said to be a void for labor actions. Merit-based pay gaps have been taken for granted, making it difficult to win support from workers for blanket improvements in the terms of their work.

The situation has changed because of discontent about the so-called K-shaped economy with growing disparities between the rich and the poor. The CEOs of the top 500 American companies earned 299 times more than the average worker in 2020, according to the American Federation of Labor and the Congress of Industrial Organizations. At Amazon, data scientists earn more than three times as much as warehouse workers. 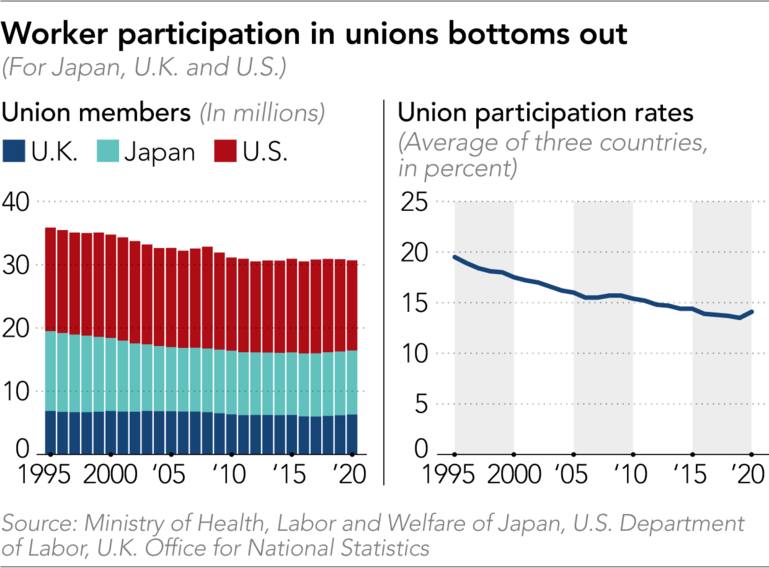 Worker participation in labor unions is reversing its long decline. In 2020, 10.8% of all workers participated in unions in the U.S., the first increase in three years and the highest percentage rise in 40 years. Unions were formed at many American IT companies, such as Kickstarter, a crowdfunding platform.

The same trend is observed in other countries as well. In the U.K., participation in unions increased for three years in a row after 2018. IT engineers formed a union, called the United Tech and Allied Workers, in 2020.

In Japan, the rate of participation rose in 2020 for the first time in 11 years, to 17.1%. The proportion of members of UA Zensen -- which groups unions at major logistics, commerce and other companies -- who are nonregular workers increased from 20% to 30% over five years.

Workers are concerned that the sustainability of their companies will be threatened unless they show readiness to face social problems in addition to demanding better working conditions. At stake is whether top managers can use an internal sense of crisis to drive reforms.

At Twitter, employees and other concerned people asked top executives to investigate how then-President Donald Trump's account had been managed in the lead-up to the Capitol riot he instigated in January. They made the call out of concern that Twitter will lose users if the case is left unexamined despite public criticism against the violence.

The death of a Black American, George Floyd, at the hands of police in 2020 led to collective action demanding that Google stop providing services to the police. In a letter to The New York Times, Parul Koul and Chewy Shaw, the executive chair and vice chair of the workers union that was formed in January at Alphabet, the parent of Google, wrote: "We joined Alphabet because we wanted to build technology that improves the world. Yet time and again, company leaders have put profits ahead of our concerns."