To raise Japan's tepid birthrate, get men off the couch

TOKYO -- Imagine you are a policymaker looking to raise your country's low birthrate, what should you do? One important step is to encourage men to do more child care and housework, according to an analysis by Nikkei.

Women tend to spend more time on child care and household chores than men in many countries. One glaring finding from the study is that the greater the disparity between men and women in time spent on household tasks, the lower the birthrate.

Data from the Organization for Economic Cooperation and Development from 2019 revealed an especially large gap in time spent on housework and child care between men and women in Japan and South Korea. Women spent 4.76 times as much time on these tasks as men in Japan and 4.43 times more in South Korea. On the other hand, in countries where the difference in time spent on household tasks is twofold or less, the fertility rate generally stays above 1.5.

In Japan and South Korea, the birthrate has fallen below 1.5, the threshold for a sharply declining population. Last year it was just 0.84 in South Korea.

Things may be starting to change. One 39-year-old woman who works in Tokyo full time gave birth to her second child in June, as she had long wished. Although she holds a managerial position that demands overtime, she felt she could handle both her job and child care because of her 45-year-old husband's active involvement in household tasks since the birth of their first child, who is now 9 years old. She decided to have a second child because she could share the burden with her husband, she said. 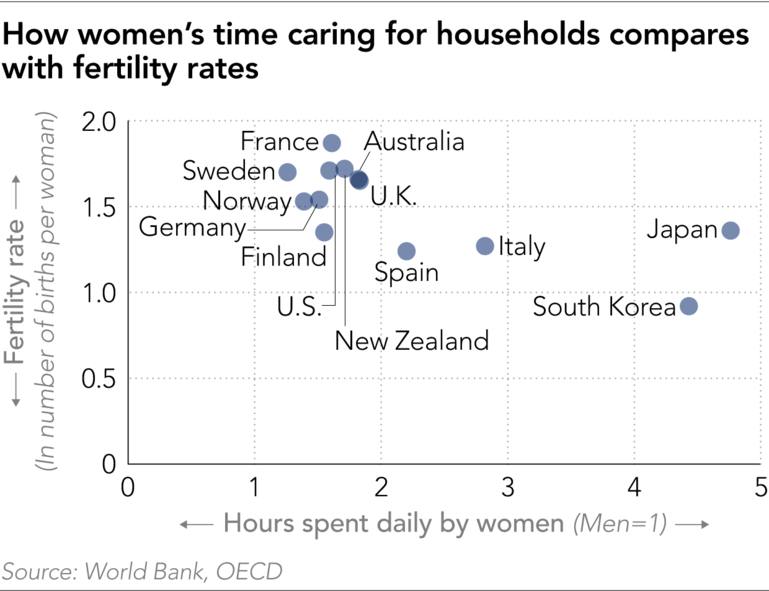 Analyzing data from 19 European countries, Matthias Doepke, a professor at Northwestern University in the U.S., and his research team found in an economic analysis that a country's birthrate falls if women shoulder a disproportionate share of the child care duties because they become less willing to have a child. The low birthrates in Japan and South Korea are closely related to the lack of time men in the two countries spend on child care, relative to women, Doepke said.

The availability of child care leave holds the key to increasing the time men spend on housework. Japan is one of the few countries where both men and women are legally entitled to the leave. In fact, Japan ranks first among 41 countries, including OECD member states, in the length of paid child care leave, according to UNICEF.

But fathers in Japan rarely take advantage of this benefit. In fiscal 2020, only 12.65% of men took child care leave versus 81.60% of women who took the leave.

Japan's revised child and family care leave law, which allows fathers to take up to four weeks of child-rearing leave within eight weeks of a child's birth, will take effect in fiscal 2022, placing employers' parental leave policies in the spotlight. To demonstrate the effectiveness of the legal change, "it is necessary to show cases in which male workers are not penalized at work after taking leave," said Shintaro Yamaguchi, a professor of labor economics at the University of Tokyo. Critics say Japan falls short when it comes to offering support to parents. The country's public spending on child care allowances, parental leave benefits, day care and other family-related programs comes to 1.79% of gross domestic product, roughly half the ratios of France and Sweden, according to OECD data for 2017.

While the birthrate is relatively high in countries with generous family-related programs, another important question is how to spend the money. Reducing the burden on mothers by, for example, setting up public day care centers is more effective at raising fertility and costs only about a third as much as providing benefits to fathers, such as subsidies, Doepke and his team found.

To raise the birthrate in countries like Japan, promoting greater involvement by men in child care and housework, and better targeting of family-related spending are indispensable. 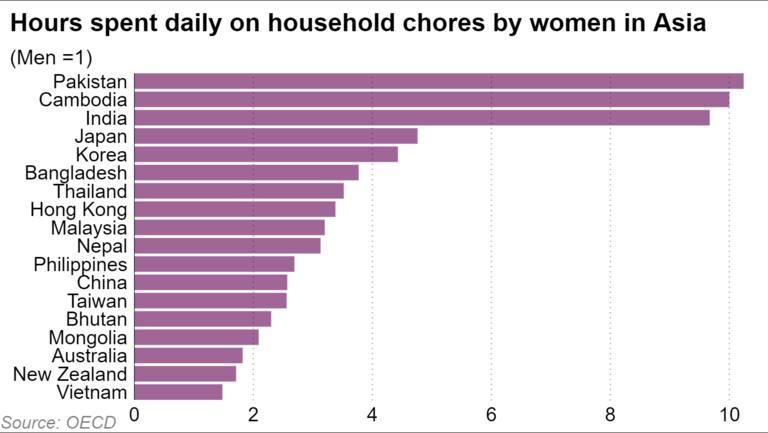