Tourists flock to Japan -- but only splash out in Tokyo

Osaka gains in visitor numbers but falls further behind in spending Analysis has found that, while visitors to Japan from abroad are spread through the country, their spending is concentrated in Tokyo.

In the first half of 2019, 16.63 million people visited Japan from abroad, up 4.6% from a year earlier, according to the Japan National Tourism Organization. Despite a slowdown in the rate of growth, the number represents an all-time high for the January-June period.

Nikkei analyzed data compiled by a subsidiary of NTT Docomo on the number of foreign visitors to municipalities and compared the 2018 figure with that of 2016.

Among the findings are that the number of visitors to western Japan has increased by 41%, compared with gains of about 20% for eastern and central Japan. Of the 20 municipalities with the biggest growth rates, 16 are in western Japan. Chuo ward in the city of Osaka, which has sightseeing destinations such as Osaka Castle, logged the biggest gain thanks to an increase in flights by Asian low-cost carriers to Kansai International Airport. A total of 13.95 million people visited the ward in 2018, meaning that one in three tourists who came to Japan visited Chuo ward.

An analysis of spending by 3.7 million Chinese and other foreign visitors using JCB branded credit cards, including those co-branded with China's UnionPay, in Japan's 47 prefectures in 2018 found that 53% of total consumption happened in Tokyo. Among municipalities, Shibuya ward in Tokyo attracted the biggest amount of spending by foreign tourists.

One 33-year-old visitor from Iran was impressed with Tokyo's famous Scramble Crossing, a multi-cornered intersection near Shibuya train station, suggesting that it looked as if the masses of pedestrians using the crossing had all "received ninja training."

A family of four from the U.S. state of Texas participated in a walking tour around the station and enjoyed shopping at the Don Quijote discount store, popular among foreign shoppers. Carrying big bags full of purchases, another foreign couple said they had lots of things to do before returning home the next day.

In Osaka's Chuo ward, meanwhile, the Shinsaibashisuji shopping street continues to attract Chinese tourists. However, their "massive shopping sprees began to subside from around the second half of 2018," according to one drug store clerk.

The ward has recorded more notifications for minpaku, or Airbnb-style room lettings, than any other municipality. Tourists fly to Osaka via LCCs, stay in minpaku rooms and eat meals such as takoyaki octopus balls and kusiage deep-fried skewered meat and vegetables at local "B-class" outlets to save on expenses. This trade provides local retailers with low-margin, high-volume sales.

Osaka is closing in on Tokyo in its number of foreign visitors, but it is falling further behind as people who visit Japan for shopping tend to spend money in their final destinations, said Hiroaki Tsukada of Mitsubishi UFJ Research and Consulting. "They tend to spend heavily in Tokyo, where lodging and dining expenses are high," he said.

According to the Justice Ministry, the combined number of Chinese tourists leaving from Tokyo's Haneda and Narita airports is larger than those arriving from them. In contract, at Kansai International Airport in Osaka, inbound tourists outnumber outbound Chinese.

The data indicated that Chinese tend to fly to western Japan, shop in Tokyo and return home from Haneda or Narita, contributing to an increase in consumption by tourists in the nation's capital. 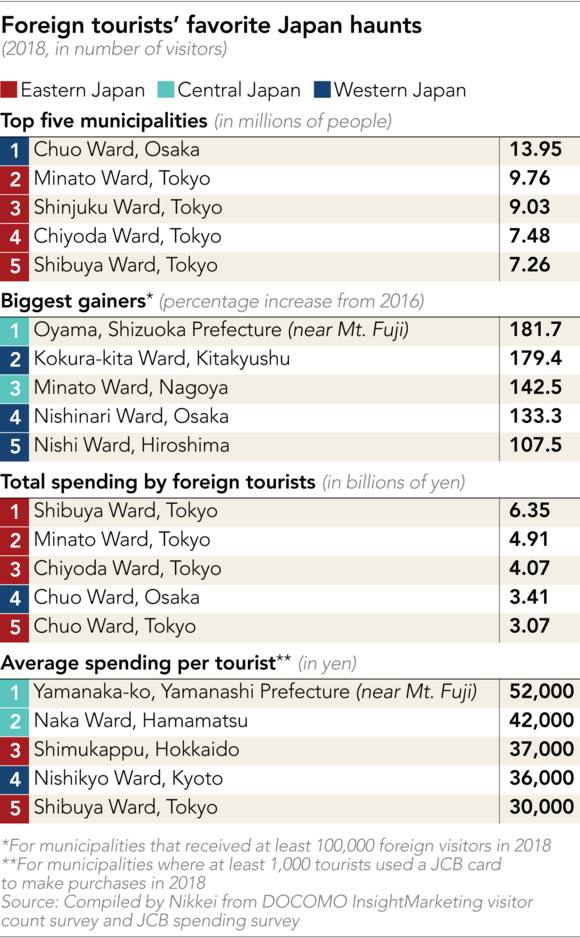 Some local governments are attracting big tourist spenders. According to JCB's data, per capita spending in Yamanakako village in Yamanashi prefecture, which draws visitors to climb Mount Fuji, was the largest among municipalities visited by more than 1,000 foreign spenders. Shimukappu village in Hokkaido ranked third, reflecting an increase in visitors from China since a Chinese investment company's acquisition of local resort Hoshino Resorts Tomamu.

Despite concentrated spending by tourists in Tokyo, inbound tourism is a boon to areas struggling with a dwindling population. However, growing tensions between Japan and South Korea are casting a shadow over this area.

Kokurakita ward in Kitakyushu, Fukuoka prefecture, ranked second in terms of the rate of visitor number growth, thanks to an increase in South Korean tourists arriving on regular flights to Kitakyushu airport, which began in 2016. The tower of Kokura Castle, combined with an adjacent shrine, have become popular spots.

But South Korean visitors have begun to decrease since the Japanese government in July toughened controls on South Korea-bound exports of materials used in semiconductors. The number of visitors had declined more than 20%, a tourism agency in the city said. The cancellation of reservations by individual tourists was likely to increase in the busy summer season, it added.