TOKYO/NEW YORK -- Terms of trade have greatly improved for the U.S. since the so called Shale Revolution enabled it to substitute oil imports and become a net energy exporter.

A country's terms of trade describe the relationship between its cost of raw materials and export prices. In energy terms, the U.S. is now insulated from high Middle Eastern crude oil costs, giving it a significant competitive advantage globally.

Two decades after the Sept. 11 terror attacks on New York and Washington, the U.S. has withdrawn militarily from Afghanistan. Having already freed itself from the shackles of oil, it is likely to have decreasing military and diplomatic involvement with the Islamic world.

The Shale Revolution has enabled the U.S. to keep funds onshore that previously went to buying foreign energy. As Daniel Yergin, a U.S. economic historian, noted in 2013, this has made the domestic economy more resistant to global economic ups and downs.

Calculated by dividing export prices by import prices, the terms of trade index shows that a country's exports have the advantage over imports when they are greater than one. This allows national earnings to be boosted through trade. 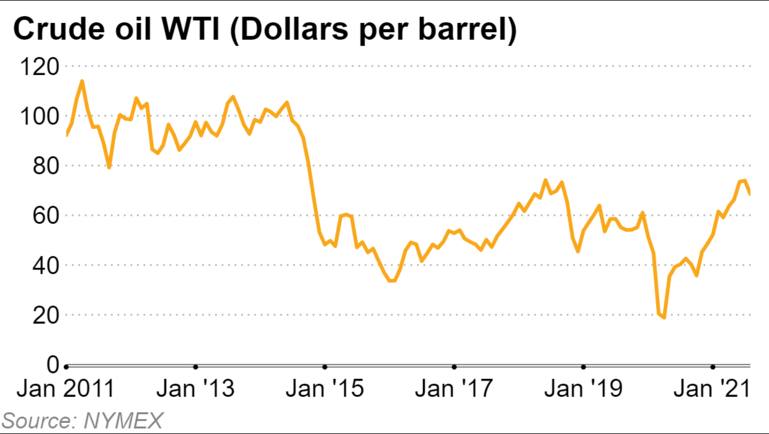 Crude oil is currently priced at around $70 per barrel, up 90% from a year ago, and the U.S. terms of trade index is over 1.05. In August 2007, when crude oil prices were also hovering at about $70, the index stood at 0.96. The U.S. at that time was a heavy consumer of imported gasoline and other petroleum products.

The improvement is largely attributable to the plunge in crude oil imports over the past decade. In 2011, the U.S. imported 11.44 million barrels of oil per day at a cost of over $100 per barrel, according to the U.S. Energy Information Administration. That year, the U.S. trade deficit was $550 billion, of which $326 billion, or almost 60%, was down to imported oil. In 2020, when it became a net oil exporter, the U.S. booked a surplus of $14 billion in oil-related trade. Shale Revolution technology extracts oil from hard rocks deep under the ground, and it has enabled the U.S. to double its crude oil production in the past decade. In 2000, the U.S. could only meet 70% of its crude oil requirements from domestic sources. Its current self sufficiency sets it apart from other major economies -- including China, Germany and Japan -- which have become less self sufficient over the same period.

Improved terms of trade have helped stabilize and strengthen the U.S. dollar. High crude oil prices previously weakened it by pushing the current account balance deeper into the red. Before the financial crisis of 2008, the global economy experienced continuous credit expansion that more than doubled oil prices in three years. The deficit contributed to a fall in the dollar's effective exchange rate of some 20%. More expensive imports squeezed household budgets and dampened economic activity. Today's dollar exchange rate is little changed from the pre-COVID-19 pandemic level even though global crude oil prices are rising.

Japan, by comparison, has seen its terms of trade steadily decline to the lowest point in 32 months. Automobiles, machinery and other exports face tough price competition in global markets, making it hard for Japanese manufacturers to maintain profit margins. Meanwhile, should greater political instability affect the Middle East leading to energy price increases, many economies competing with the U.S. will be even more badly affected.