'Pipeline from university to startup to boardroom' under threat, academics say TOKYO -- The U.S. government is starting to exclude Chinese students and researchers, while the Chinese government is going its own way when it comes to developing science and technology, trends that academics say will hollow out the institutions America has come to rely on to maintain its global competitiveness.

Researchers from the hegemons are used to collaborating and in many cases have become interdependent, but the U.S.-China decoupling in scientific research puts American science and technology advances at risk.

"I thought studying in Japan would be better than in the U.S.," said Wang Yuchen, who is pursuing a Ph.D. at the University of Tokyo. Wang graduated from Peking University in 2016, having majored in physics. Accepted by Princeton University, he chose not to go.

The number of Chinese studying in the U.S. had been increasing until December 2017. As of January 2020, according to the U.S. Department of Homeland Security, 368,800 Chinese students were enrolled in U.S. colleges, 2% fewer than a year earlier. One big reason is that the U.S. is issuing fewer visas to Chinese students.

In May, the Federal Bureau of Investigation arrested a Chinese-American researcher who hid his connections with the Chinese government while receiving grants from the U.S. government. A month later, the U.S. National Institutes of Health announced it had fired more than 50 people who failed to disclose financial ties with foreign governments. The institute discovered them during a probe it began in 2018. 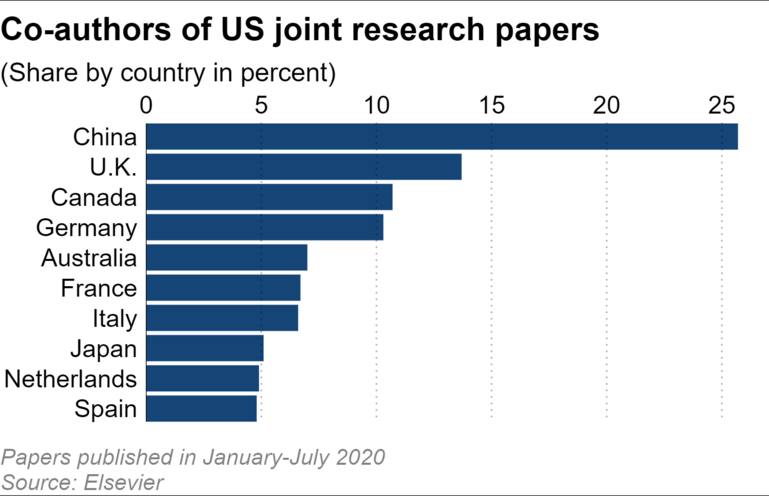 U.S. and Chinese academic researchers collaborate quite a bit. According to Elsevier, a Dutch academic-related publishing and information analytics company, in 2020, 38% of the international partners of Chinese joint research papers worked at U.S. institutions.

On the flip side, 26% of the co-authors of joint research papers from the U.S. worked at Chinese institutions.

Although it is China that is on the rise, the collaborations enhance science, technology and the competitiveness of the U.S. as well.

In July, the U.S. Immigration and Customs Enforcement announced guidance -- no visas for new international students whose schools resort to online courses due to the pandemic. The guidance triggered a backlash from institutions of higher education. The Massachusetts Institute of Technology filed a suit to block it, fearing not only the loss of tuition income from foreign students but also foreign researchers' contributions to high-tech projects.

Data from the U.S. National Science Foundation shows that in 2018, 37% of the students who acquired science and technology doctorates were foreigners. Out of these, about 40%, the largest share, were Chinese. Japan's Ministry of Education, Culture, Sports, Science and Technology has some data that underlines how much foreigners with doctorates contribute to the U.S. high-tech industry: Roughly 60% of those holding Ph.D.s in the U.S. tech industry are not citizens of the country.

China, meanwhile, is developing its own research foundations. Elsevier's data shows that in 2015, 45% of the co-authors of China's joint papers were from the U.S., but the figure has decreased for five years in a row, falling to 38% this year. 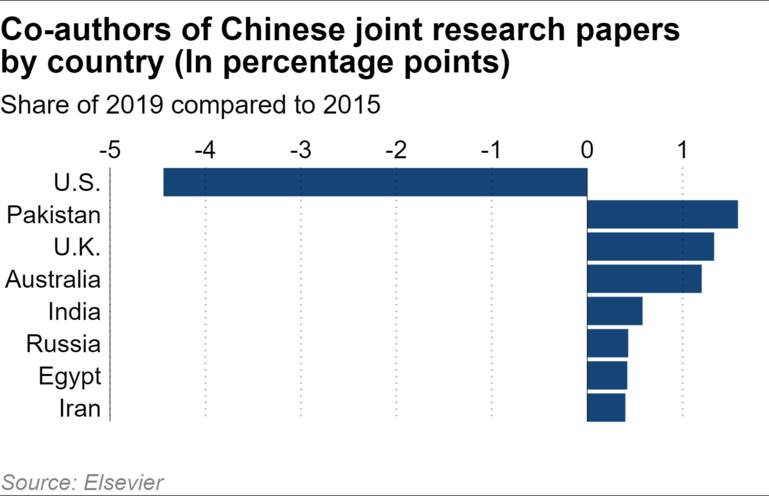 In 2017, China became No. 1 among countries producing scientific papers. Furthermore, in February of this year, the Chinese government released a document that encourages domestic researchers to publish scientific articles in domestic journals rather than prestigious international periodicals such as Nature and Science.

Mark Elliott, a Harvard University professor, warns that "if those [talented] people choose to go elsewhere, or to stay at home instead, American universities, which historically have always depended upon the ability to attract creative talent from all over the world to their campuses, will find it harder to maintain the strength of their academic enterprises.

"If the pipeline from the university to the startup to the boardroom should shrink, the American economy, American competitivity in the world market, and American society generally will suffer."