Was Afghanistan's cease-fire underpinned by Ramadan?

LONDON -- The unprecedented cease-fire in Afghanistan at the end of June has been hailed as a huge step forward by many observers, and has potentially laid the groundwork for future peace talks.

Data compiled by the Armed Conflict Location & Event Data Project, or ACLED, shows that the decision to call for the truce during Ramadan may have been pivotal to its success.

An appeal to suspend fighting during the fasting month from the Afghan government was rejected by the Taliban in 2017. However, the same offer this year resulted in a truce over the weekend of Eid al-Fitr, the festival marking the end of the fast.

While it may have been a short-lived cease-fire, and one that was followed by an immediate return to violence, its importance cannot be underestimated -- this was the first time the Afghan government and the Taliban had agreed to a suspension of hostilities since the start of the 17-year conflict. 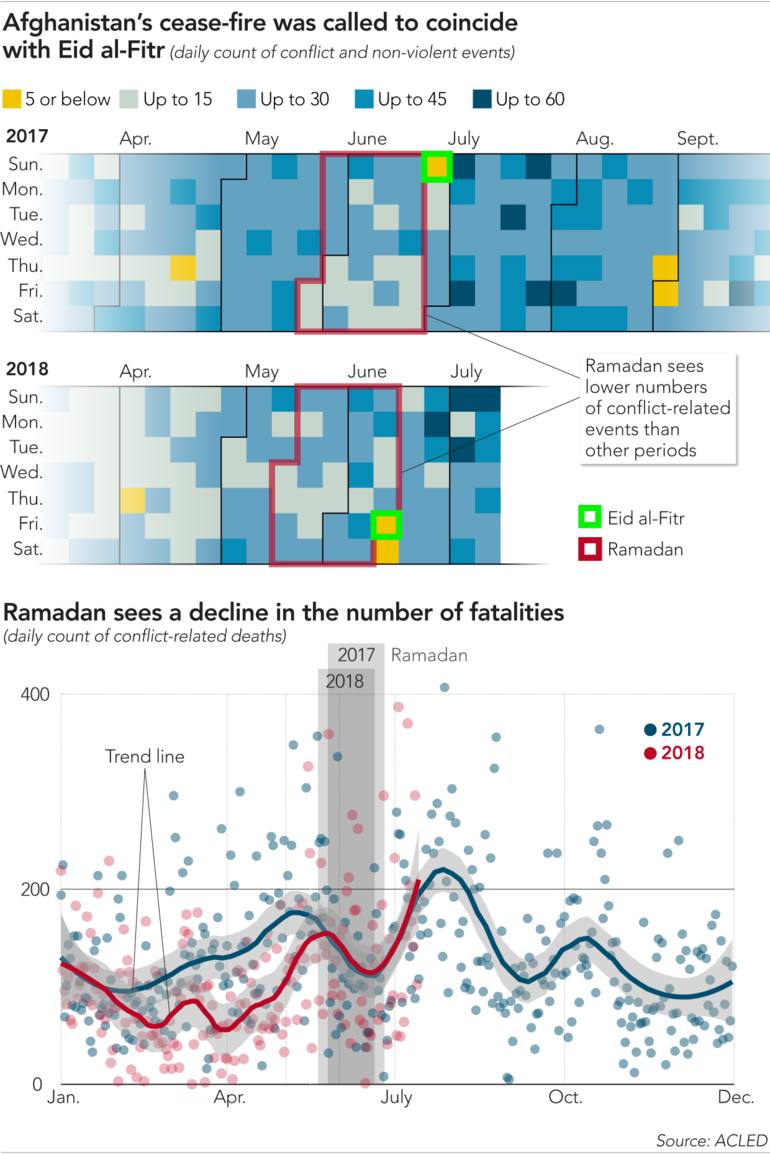 "Cultural and religious factors could affect the success of a cease-fire agreement," said Sebastian Schutte, a political scientist and research fellow at the University of Konstanz.

The median figure for conflict events during Ramadan in 2017 was 15% lower than on any given day before the period, and 26% lower than afterward. In 2018, when the Taliban reciprocated the gesture of goodwill over Eid, the median rate dropped to 17% below the pre-Ramadan figure and 30% below the rate thereafter.

Given that the success of a cease-fire is often pivotal to the chances of developing peace in the long term, calling them during periods when they are likely to be observed can be crucial.

A study published by the American Political Science Review found that important Islamic holidays see consistent declines in violence, sometimes by as much as 41%.

There were even reports of Taliban fighters engaging with government troops during this year's Eid celebrations.

The timing and the mutual buy-in was essential to the success of the most recent cease-fire in Afghanistan, said Roudabeh Kishi, Ph.D. research director at ACLED.

In addition, the Afghan government's decision to call for a truce over a relatively short period of time made the feat considerably easier to accomplish.

Gareth Price, senior research fellow for the Asia-Pacific program at Chatham House, said that conflict fatigue and a wariness of "fighting for the sake of fighting" among the population may also be a factor in the chances of success of a cease-fire, adding to the significance of trying to implement them during religious festivals.

In terms of long-term outcomes, it will be interesting to see whether the Afghan government will repeat the exercise next year, said Kishi.