TOKYO/FUKUOKA, Japan -- While big corporations across the world have enjoyed an earnings boom in recent years, data shows that governments have not seen corporate tax revenues increase in tandem.

In a digital economy with no physical borders, governments struggle to grasp the full activities of multinational corporations, and businesses scour the globe in search of the biggest tax savings. This has led to an international race to the bottom on tax rates offered.

Using data compiled by QUICK FactSet, Nikkei analyzed pretax profits and the amount of tax paid at the world's top 100 companies in terms of market capitalization.

The analysis showed that until the 2000s, there was a strong tendency for higher profits to lead to increased tax payments. But this relationship between profits and tax payments collapsed in the 2010s.

The percentage of tax paid on pretax profits at listed companies declined to 23% in 2018 from just over 30% in 2000. This came about largely because of international competition to lower corporate tax rates, a major factor in where companies choose to invest. 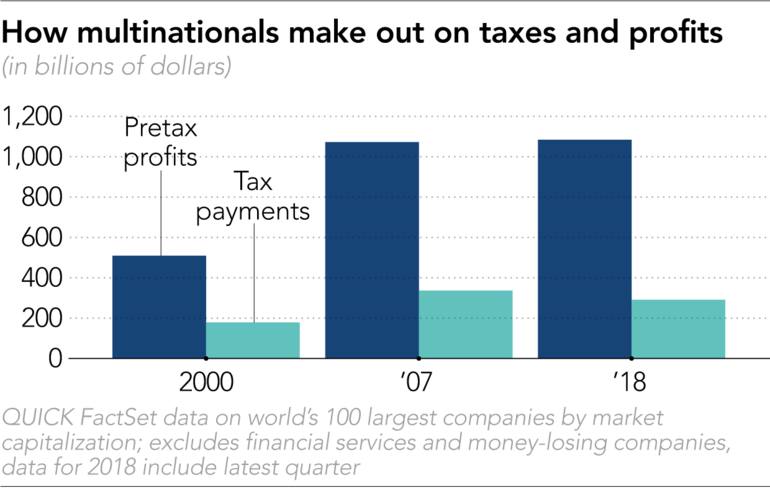 Ireland, which led the way, slashed its statutory tax rate to 12.5% in 2003 from 24% in 2000. After multinationals like Apple set up tax homes there, Ireland's ratio of corporate tax receipts to total tax and social insurance revenues rose to more than 12% in 2017, higher than the about 8% average for member nations of the Organization for Economic Cooperation and Development.

Switzerland and Czech Republic had similar results. Somewhat belatedly, leading European economies such as Germany and Italy followed suit. In 2018, the U.S. lowered its federal corporate tax rate from 35% to 21%.

Many countries hoped that lower tax rates would stimulate corporate activity and eventually lead to higher tax revenues. But despite that hope, they have failed to increase the amount of tax payments as much as they had expected. A major reason is the growth of the digital economy. The sources of value created by Google, Amazon and other big information technology companies are all intangible assets like brands, expertise and customer data, and not the physical assets of the past such as factories and shops.

Digital companies can park this intellectual property in low-tax jurisdictions. These subsidiaries then collect royalty payments from operations around the world, generating huge tax savings.

The situation is complicated by the digital economy's "winner-take-all" environment, in which just a handful of companies running big platforms make huge profits. According to a study by the International Monetary Fund of about 1 million companies in 27 countries, the top 10% of companies have seen their earnings rise by over 30% since 2000, while the earnings of others have remained flat over the same period.

In Japan, the percentage of corporate tax in tax and other revenues is relatively high, at just over 10%.

One reason is that the weight of corporate tax is high in Japan as consumption tax has not been raised as planned. Another reason is that it is easy to keep track of companies' incomes in Japan as traditional industries still play a central role in the economy. But if the digitalization of the country's economy progresses, the situation will change.

The Group of 20 major economies are grappling with this challenge. But it remains to be seen whether they can work out effective measures by resolving the differences in their tax regimes.

"It sounds like we have a strong consensus," U.S. Treasury Secretary Steven Mnuchin said at a meeting Saturday of G-20 finance chiefs in the Japanese city of Fukuoka. "So now we need to just take the consensus across here and deal with technicalities of how turn this into agreement."

During a symposium held on the sidelines of Saturday's international taxation meeting in Fukuoka, Japanese Finance Minister Taro Aso stressed the significance of international cooperation.

The G-20 economies will seek to reach a basic agreement on new corporate taxation rules by January 2020. Under proposed new rules, tax revenues would be allocated to countries with many digital service users, even if there are no physical footholds or transactions of goods there.

To stop the cycle of competition among countries to lower corporate tax rates, a global minimum tax rate has also been proposed.

With international cooperation on tax systems now facing a moment of truth, Fukuoka might just go down in history as the name of the place where a new international taxation system was born.