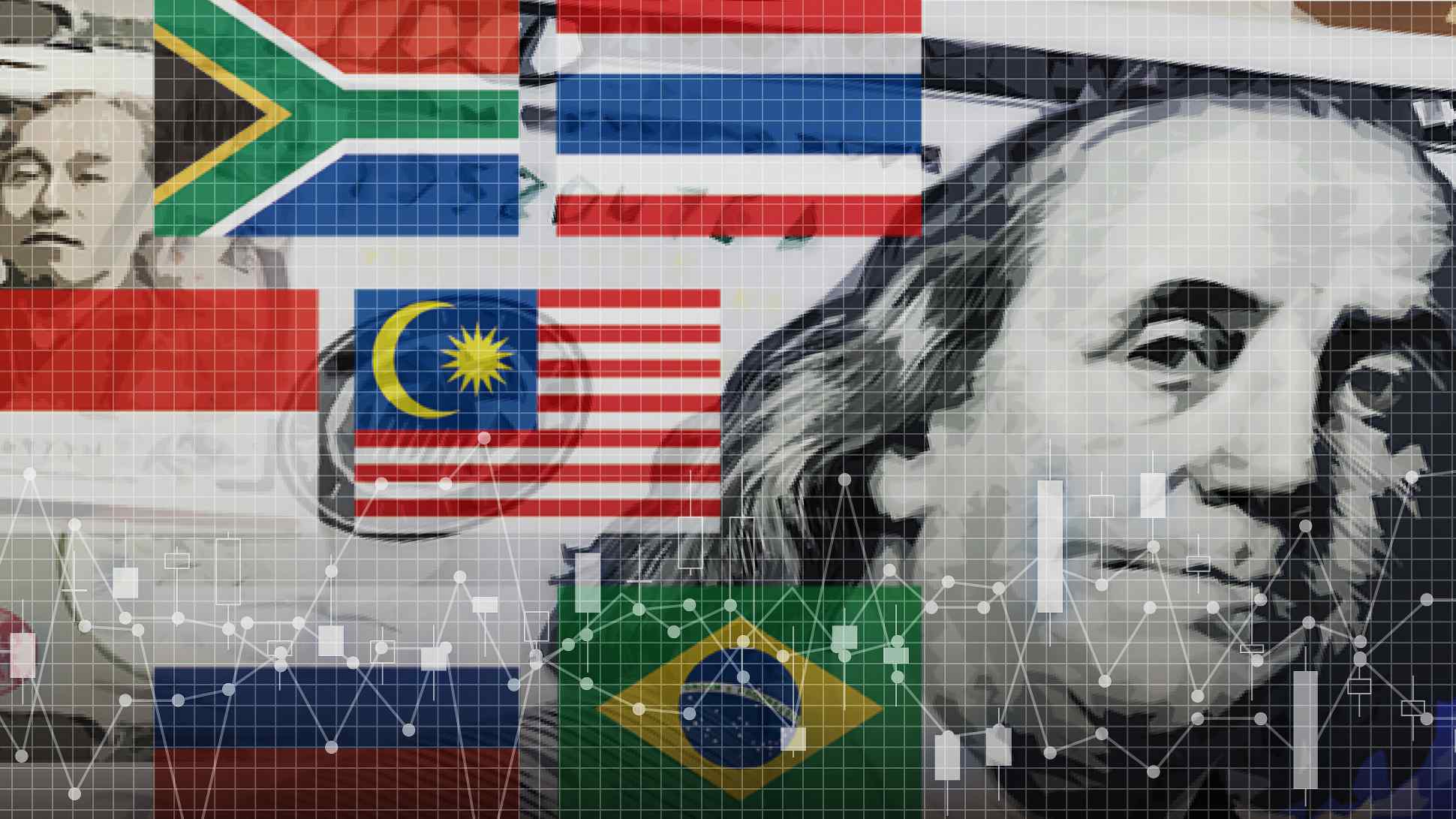 The appreciating dollar poses risks to currencies issued by emerging economies that are having difficulty fighting off the resurgent coronavirus.
Datawatch

Who's in trouble, the US dollar or emerging economies?

TOKYO -- The U.S. dollar has surged on the country's steep economic rebound, in a trend that threatens emerging economies struggling with the resurgent COVID-19 pandemic.

The theoretical value of the dollar noticeably fell after the U.S. government began to write checks to help Americans through the pandemic, causing its debt to swell. But the market changed direction earlier this year.

The U.S. economy, as measured by gross domestic product, expanded at an annualized rate of 6.5% in the April-June period from the preceding quarter. The fast pace came thanks to sharp increases in personal consumption and private-sector capital spending, which bounced back to pre-pandemic levels. Although the risk of another COVID-19 wave remains, economic barometers are generally solid. It now takes about 109 yen to buy a dollar, up from the 103-yen level at the start of this year.

The U.S. Federal Reserve's upcoming moves will greatly affect the dollar's outlook. The Federal Open Market Committee expects interest rates to begin rising in 2023 rather than in or after 2024 as earlier forecast. "U.S. long-term interest rates are under strong upward pressure," Mari Iwashita of Daiwa Securities said, foreseeing an increase in upward pressure on the dollar.

And the dollar-carry trade, in which low-interest-rate dollars are borrowed to buy high-interest-rate currencies, is losing momentum. "More investors are unloading emerging nations' currencies that tend to be affected by U.S. interest rate hikes," Minoru Uchida of MUFG Bank said. 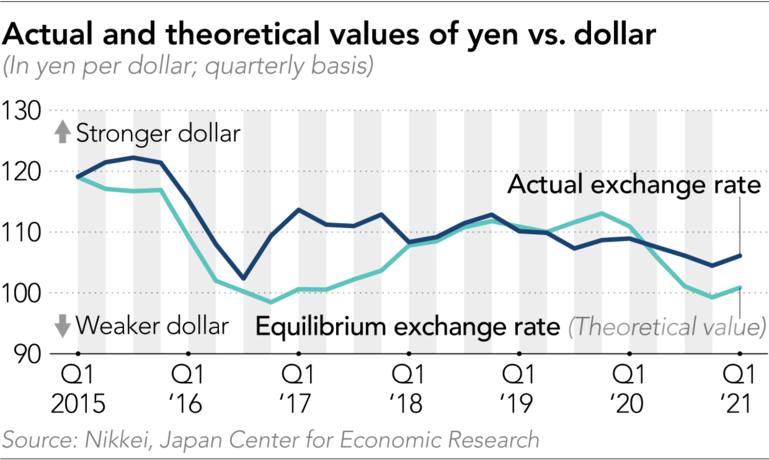 The Nikkei equilibrium exchange rate also shows the dollar firming up. Calculated by Nikkei and the Japan Center for Economic Research, the Nikkei EER is based on a country's economic fundamentals such as government debt and current-account balance.

Generally, a currency saddled with heavy government debt and a large current-account deficit suffers a decline in its comparative value.

The Nikkei EER, or theoretical value, of the dollar stood at 113 yen in the October-December period of 2019, before the pandemic. It fell to 99 yen in the same quarter of 2020, after the U.S. moved to shore up its flagging economy with massive fiscal spending.

In the first quarter of 2021, the dollar's Nikkei EER turned upward, as did its actual value, to nearly 101 yen. It is also rising strongly against the euro and the currencies of Indonesia, Malaysia and other emerging economies.

The upturn in theoretical value is largely attributable to the rapidly expanding U.S. GDP, which is outpacing the total value of goods and services produced in Japan and other countries. U.S. GDP grew at an annualized 6.3% in the January-March period on a quarter-to-quarter basis. In contrast, Japan suffered a 3.9% plunge.

While governments around the world remain in high-spending mode, in the U.S. the pace of fiscal deterioration vis-a-vis GDP is taking a breather.

The theoretical value of the dollar has also caught a break from the relatively limited worsening of terms for international trade transactions. Crude oil prices, which greatly affect the terms, keep rising because of a global economic recovery. The U.S., however, has made its economic structure more resistant to high crude oil prices, partly by using shale oil production to lower its reliance on oil imports. In 2020, the U.S. exported crude oil and petroleum products in excess of imports, according to the U.S. Energy Information Administration. 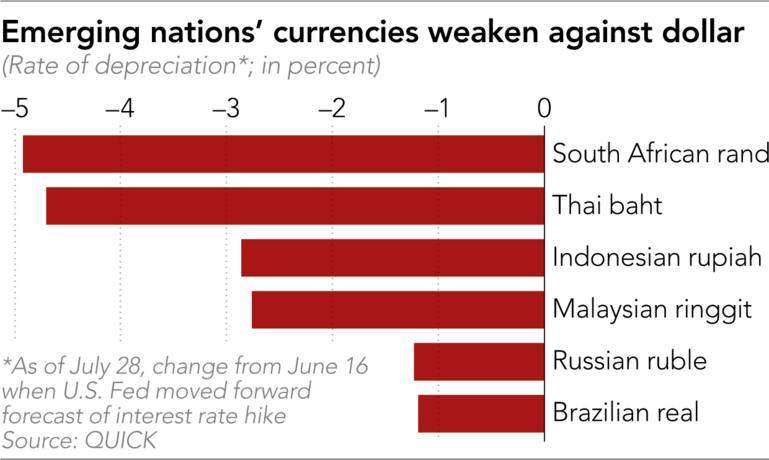 Economic trends down the road hold the key to whether the dollar remains strong. As the actual value of the American currency is higher than its theoretical value, the dollar could go south if the U.S.'s economic recovery weakens. But other currencies could be forced into direr straits.

The World Bank forecasts that the Brazilian economy will grow 4.5% and Russia's 3.2% in real terms in 2021, slower than the projected global economic growth rate of 5.6%. Nevertheless, the countries' central banks decided to raise interest rates at four consecutive policy board meetings in a desperate attempt to prevent the mass exodus of their currencies and the acceleration of inflation.

Surging and more virulent coronavirus strains are another concern. Since the start of July, the number of new daily cases has kept setting new highs in Thailand, resulting in nighttime curfews in certain areas.

Indonesia is taking a double punch from the dollar's appreciation against its currency and from surging COVID-19 infections.

In fact, emerging economies with dollar-denominated debt will face heavier repayment burdens if they fail to contain infections fast enough and if the dollar goes on appreciating.