TOKYO -- Massive job cuts caused by the coronavirus pandemic are concentrated on sectors that tend to employ many women, a trend that highlights a lopsided economic impact both at home and abroad.

In the first seven months of this year, 870,000 jobs were lost in Japan, mainly in the hotel, food service and retail sectors, where there are far more female employees than other sectors.

One woman who had a part-time job at a hotel in northern Japan told Nikkei that she was fired in July, losing her monthly income of 150,000 to 160,000 yen ($1,400 to $1,500). She is now looking for a job in the tourism sector but says it is difficult; tourists are decreasing and most of the companies in the industry are considering layoffs.

According to data from the Ministry of Internal Affairs and Communications, the number of employees in Japan's service and retail sectors are decreasing significantly.

Stay-at-home policies and shorter business hours for shops and restaurants are forcing the industry to cut its workforce and especially its female employees.

By comparing the monthly average of female workers in April-July 2020 to the same period the previous year, the hotels and food service sector saw a decrease of 280,000 workers; the lifestyle services and leisure sector decreased headcount by 140,000; and wholesale and retail staff dropped by 110,000. By comparison, the number of jobs lost by male employees was less than 100,000 in each of these sectors.

In these sectors, females make up more than half of the workforce, with many contracted as part-time workers and who are therefore easier to lay off.

The entire number of employees in Japan in July was 26.6 million people, 3.2% less than the end of 2019. But, out of this entire workforce, the decline of male workers was only 0.8% over the same period, meaning women were hit hardest. 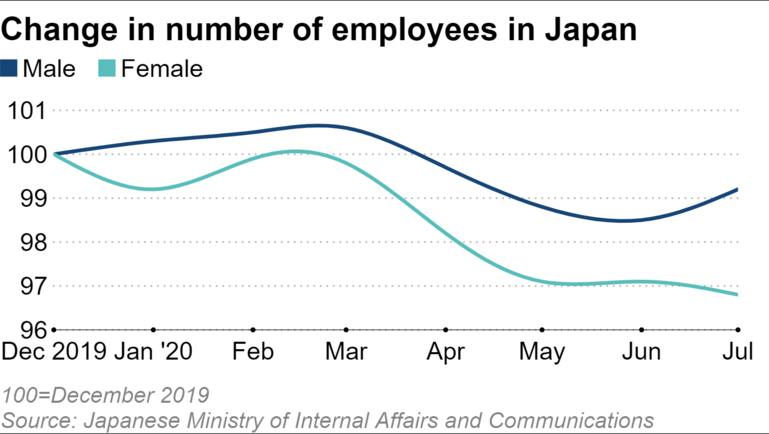 Toshihiro Nagahama, an economist at Daiichi Life Insurance, said: "This is the opposite of what happened during the global financial crisis -- it was the men who were laid off." When that crisis hit in 2008 and 2009, global demand declined rapidly and the manufacturing industry, dominated by men in Japan, took a strong blow.

The currents headwinds facing female workers are likely to continue. In the retail sector, e-commerce practices and self-checkouts at supermarkets are increasing. Nagahama predicts that these trends, coupled with the pandemic, will accelerate the new norms of social distancing.

Japan's workforce increased by about 5m people in the seven years to the end of 2019, mainly because of more women starting to work. If the number of women entering the labor force drops, Japan's potential economic growth rate could decrease. This situation is not only affecting Japan, but is being seen across the world.

Data from the International Labor Organization show that roughly 40% of female employees work in sectors such as food service and retail, which have all been hit hard by the pandemic. However, a different picture can be seen when sectors are examined more closely. In Japan, the ratio of job vacancies to applicants in nursing services for the elderly in July was 3.99, meaning that for every four available jobs there was only one applicant, and the figure was 2.75 for care and social workers. This indicates a strong demand for labor in these areas. The comparative number for the whole labor force was 1.08.

In these sectors, there is a great need for female workers in Japan. The monthly average number of female employees in the health care sector increased by 80,000 in April-July 2020, compared to April-July 2019.

Female employees in the information and communication sector have also increased. Some believe the pandemic will offer more opportunities for women as working from home becomes more prevalent.

Hisashi Yamada, an economist at the Japan Research Institute, said: "To have a stable job, people need to choose a sector where there is a labor shortage, or learn digital technology." Due to the pandemic, job vacancies for people with digital technology experience are increasing.

As the pandemic forces the transformation of the labor market, more policy measures need to be implemented, such as enhancing digital skills for women.