Investors slam on brakes in Myanmar in wake of coup Soldiers stand at a checkpoint on a road leading to the parliamentary compound in Naypyitaw on Feb. 1.   © Reuters
NGUYEN THI BICH NGOC, DealStreetAsiaFebruary 6, 2021 11:12 JST | Myanmar
CopyCopied

HANOI -- Investors who were beginning to show interest in the frontier market of Myanmar were thrown off course by the abrupt detention of the country's civilian leaders, including State Councilor Aung San Suu Kyi, on Monday.

"The country will be untouchable for foreign investors for at least the year of the state of emergency," said early-stage investor Seed Myanmar's chief operations officer and general counsel, Field Pickering.

"Any company in Myanmar who had fundraising plans for 2021 and was able to persevere through a tough 2020 due to COVID-19 is in for a one-two punch, and we are likely to see a number of casualties due to a dearth in fundraising," he added.

Myanmar-based private equity funds that DealStreetAsia spoke to said they are monitoring the situation closely as they adopt a wait-and-watch policy before parking fresh capital in the country.

"Our focus remains honed on understanding the impacts to the Myanmar investment community, including those companies in the country seeking to raise capital, particularly from institutional investors," the Myanmar PE&VC Association posted on its LinkedIn account on Wednesday. 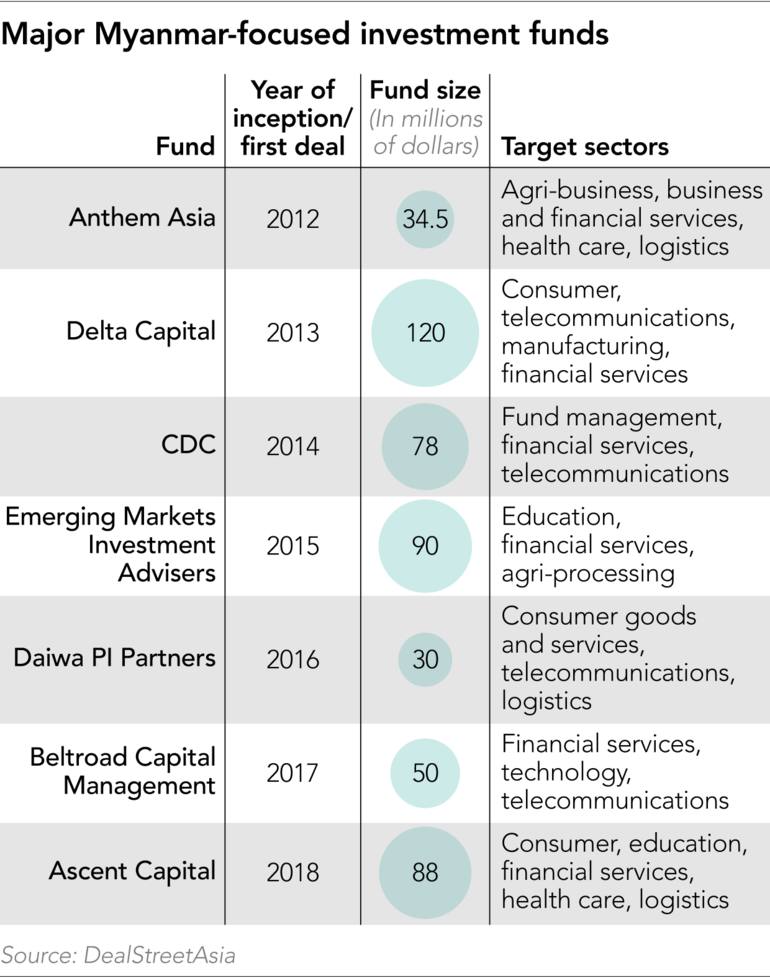 Japanese corporate investors in Myanmar -- from retail giant Aeon to automotive companies like Toyota Motor and Denso, as well as conglomerate Mitsubishi Corp. -- are reported to be assessing the turmoil in Myanmar.

"The primary concern is that international businesses and investors will lose confidence, and decide to leave the country and relocate or refocus elsewhere in the region," a regional fund manager with a Myanmar mandate told DealStreetAsia.

While investors may continue to pursue deals in the short term, parking long-term capital would take even more due diligence. "Longer term is much harder to say. There is still so much that we don't know about what will happen in the coming months," he said.

Credit rating agency Fitch labeled the situation in Myanmar as "a substantial backtracking" of the democratic process in the country in recent years, which will "weigh heavily on policymaking, social stability as well as international perceptions of the country."

"With the military leadership's attention focused on preserving its power over the near term, we think that little political energies will be directed towards the formation and enactment of reform-oriented economic or social policies," Fitch said in its Tuesday note, predicting a rise in public unrest over the coming weeks.

If democracy is not restored swiftly, the New York-based agency said, Myanmar could fall under sanctions again. The U.S. government on Tuesday has threatened to impose sanctions on Myanmar with regard to the ousting of the civilian government by the country's armed forces, according to the Financial Times. Fitch has cut its economic growth forecasts for Myanmar to 2% in both FY2020/2021 and FY2021/22, from 5.6% and 6% previously. Infrastructure projects and foreign direct investment, which have been the key drivers for the local economy, could be delayed or canceled altogether if sanctions are implemented and if foreign entities decide to pull the plug amid elevated political risks, it said.

Myanmar's military reportedly said later on Monday it will hold another election and will return power to the winning party. However, it remains unknown when the ballot will be held.

The crackdown in Myanmar has resulted in an internet and mobile blackout even as the country has become a mobile-native market, with mobile phone penetration reaching 126% and internet penetration reaching 41% as of January last year, according to "Digital 2020: Myanmar," a report published by We Are Social and Hootsuite.

"The events of [the overthrow] will cause extra hardship, on top of an already stiff set of COVID-19-related challenges," said Dominic Scriven, founder and executive chairman of Dragon Capital, a Vietnam-based fund manager that set up Yangon-based Ruby Hill Microfinance with Loi Hein Group Myanmar in 2017.

"Presumably it would be a different situation from past events, such as the Rakhine crisis, when the rest of the country could just do what they were doing," added another investor in Myanmar.

Seed Myanmar, which invests in digital startups in the country, expressed concern that its portfolio companies would not be able to deliver services if the armed forces shuts down or limits access to the internet.

The military leadership probably has little clue about how the boom in the Myanmar economy goes hand-in-hand with the digital revolution, according to content agency DigFin.

"This isn't Myanmar 2008. The Burmese people have tasted from the fruit of fintech: access to finance, empowerment embedded in consumer lifestyles, convenience, connection to one another and the outside world," the company wrote in a commentary.