Zoom and Alibaba have opened new offices, jostling with Sea and Grab to expand 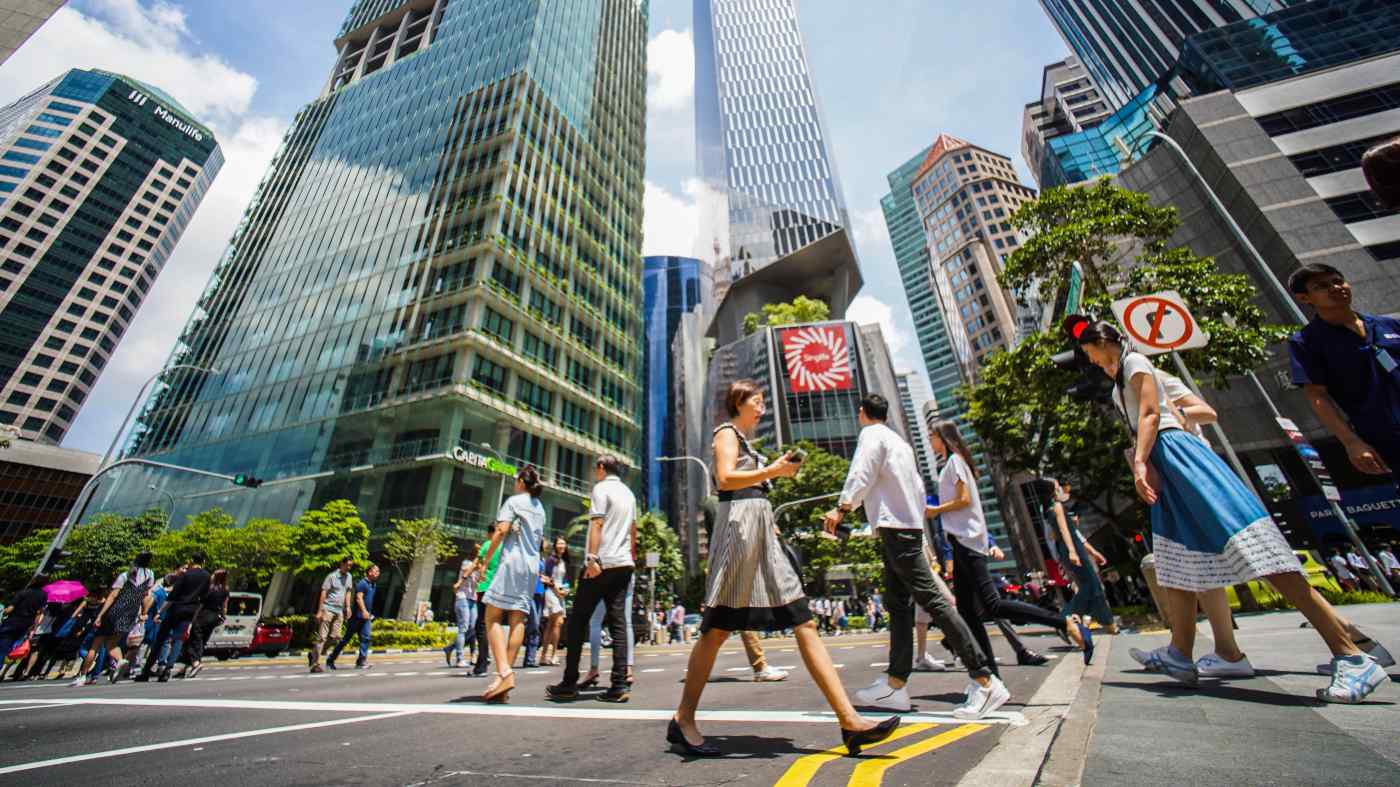 SINGAPORE -- Scouring for tech talent has long been a challenge for companies in Singapore, an island with a population of just 5.7 million.

With more and more global and regional technology majors setting up a base in Singapore, the talent hunt just got further intensified, pushing companies to actively turn to remote hiring.

What has also accelerated the trend of remote hiring from neighboring geographies is the acceptance of the pandemic-induced telecommuting culture that has prevailed for over a year now.

Since last year, tech giants like Zoom, Stripe, ByteDance, Tencent, Huawei and Alibaba have opened new offices and headquarters in Singapore, jostling with the likes of Sea Limited and Grab that continue to expand aggressively.

On ByteDance's recruitment website, for example, as of May 18 there were 316 positions available in Singapore, out of 1,151 globally. Data from LinkedIn showed that the company was the top recruiter in the software and IT service industry in Singapore as of February 2021, followed by Sea's e-commerce unit, Shopee, and Delivery Hero's Foodpanda.

Recruitment portal NodeFlair, which helps Ant Financial, ByteDance and Shopee with their headhunting needs, said 730 tech vacancies are put up every week for roles such as full-stack developers, back-end engineers, system operator engineers and data engineers.

The growing demand for talent from the bigger players has made it increasingly difficult for smaller companies to find the right people. "Because of the brand name, a lot of (job-seekers) will flock to that direction, especially fresh and midlevel engineers," said Kian Chong Chan, a recruitment specialist at the company. "[And] the bigger players offer quite an extravagant range of salary."

A report published in March by venture capital firm Monk's Hill Ventures and recruitment site Glints said that these giants are more likely to offer above-market rates, and sometimes write blank checks for candidates they seek. Technical positions, it added, command at least 50% more than nontechnical ones like those in sales and marketing.

Workers in Singapore typically command a higher pay package compared to their counterparts in neighboring countries. For example, a junior backend developer in Singapore may get at least $2,400 a month, four times more than their Indonesian or Vietnamese counterparts, the report highlighted.

Even before the pandemic, health-tech startup MyDoc's engineers were based in India and Vietnam. Salaries of India-based developers are 39% of what a similar profile in Singapore would earn, chief marketing officer Melisa Teoh said. The company will probably continue to hire remotely for "cost efficiency."

"The most important criteria are role and culture fit within the budget we have," she said, adding that "physical location is secondary if the candidate is located within a two- to three-hour time zone and is able to reasonably work the same hours."

Spire Research & Consulting CEO Leon Perera said it is natural for startups to turn overseas given their high capital burn rate. "And with COVID, the hiring and foreign domestic investments going into these economies have slowed," Perera said, adding that it is "easier for startups to hire people remotely."

Besides, colleagues have also adapted to the complexities of telecommuting, such as managing conflicts over e-mails or video calls during the pandemic.

Impress.ai co-founder Sudhanshu Ahuja said there are benefits to remote working, too. "If we want our product to become global ... we need people who think differently from the people who founded the company. If you have everyone from the same culture, growing up in the same environment, you cannot have that diversity of ideas," he said. His company, which provides AI-driven recruitment software, has 25 tech employees in India and four in Singapore.

However, companies may not want to continue running on telecommuting arrangements once the pandemic is over. "Remote working is like a plug-in, but it can never be the mainstay of a company," said Lawrence Loh, a business professor at the National University of Singapore. "[At work], you need camaraderie [for people to] persist and persevere."

There are organizational issues that come with remote working as well -- cybersecurity, confidentiality and managing employee productivity, he added.

For some companies, like educational technology startup Hardskills, remote hiring is not their first choice. But a talent crunch, coupled with tough work permit norms, pushes them to look outward.

"We have tried to hire [in Singapore] previously but didn't find the right talent for the right price," said co-founder Shoba Purushothaman. Hardskills, which develops corporate training products, was founded in 2016.

The company wants to get another eight into the team by the end of this year as it scales up in Asia, and Purushothaman said they hope to hire at least three in Singapore, but she is not optimistic.

Visas have gotten harder to secure, especially after the country raised its minimum monthly salary for employment passes -- permits for executives and managers -- twice last year, and it is still an employees' market.

"Culturally there is still a big weight given to brand names. ... Employees [in Singapore] want security," Purushothaman said. "Whereas I think in a more mature ecosystem like the U.S. or London, you will find many people very motivated to join a startup and being part of that 'make-it-happen team.'"

The trend of remote working highlights how delicate Singapore's position as Southeast Asia's tech hub is.

"It's not rosy," said Eugene Tan, an associate professor of law at the Singapore Management University. Investors and companies could move elsewhere if they feel they are unable to grow because of insufficient manpower and increasingly tight immigration policies, he said. "I think the pandemic has shown that it [remote work] is something that could become mainstream."

To alleviate the manpower crunch, the Singapore government has launched numerous apprenticeship programs and training courses to re-skill local job-seekers in tech skills, particularly in the past year, when retrenchments shot up by 2.5 times year-on-year.

Enrollment in information technology courses at local universities have also nearly doubled, from about 4,900 in 2016 to nearly 8,400 in 2019, according to government data.

There are also initiatives to make it easier for companies to bring in foreign tech executives. The government launched a Tech.Pass program with a minimum $15,000 salary criterion aimed at attracting industry experts.

But these steps might not churn enough of the tech professionals that Singapore needs. Last June, the minister in charge of the Smart Nation Initiative, Vivian Balakrishnan, said Singapore was only producing 2,800 information and communications graduates annually but needed 60,000 tech professionals in the next three years.

Visas like the Tech.Pass do not help in getting startups the foot soldiers they need, given the strict criteria. Candidates need to have earned at least 20,000 Singapore dollars ($15,000) every month or held a leading role in a tech company with a minimum valuation of $500 million or at least $30 million of funding raised.

Policymakers need to study whether they can ease visa requirements or get creative with ways to generate more local interest in tech jobs, observers said.

But even if remote work becomes a mainstay, some in the industry believe it will not threaten Singapore's status as a financial hub with strong intellectual property protection laws and connectivity to the rest of the world.

"Singapore has a clear value proposition. ... You sign your contracts there, your CFO (chief financial officer) is there because the investors are there," said Olivier Raussin, the co-founder of the venture capital firm FEBE Ventures. "It is the core of the engine. It does not need to go from 5 million to 10 million people [as long as] all the good companies are represented there."

And offshoring tech centers is the norm even among other nodes like London and New York, but that has not made them any less attractive to startups and venture capitalists.

GGV Capital managing partner Jixun Foo says Southeast Asia, as a whole, needs to build up its talent base, particularly its pool of engineers. "Grab and Gojek and Sea leverage a lot on China, India and U.S. for talent," he said. But he is optimistic that as the region becomes a tech powerhouse, people will be drawn to work here. " I think where you have capital, you can also attract talent. Eventually, talent will flow back to the region."